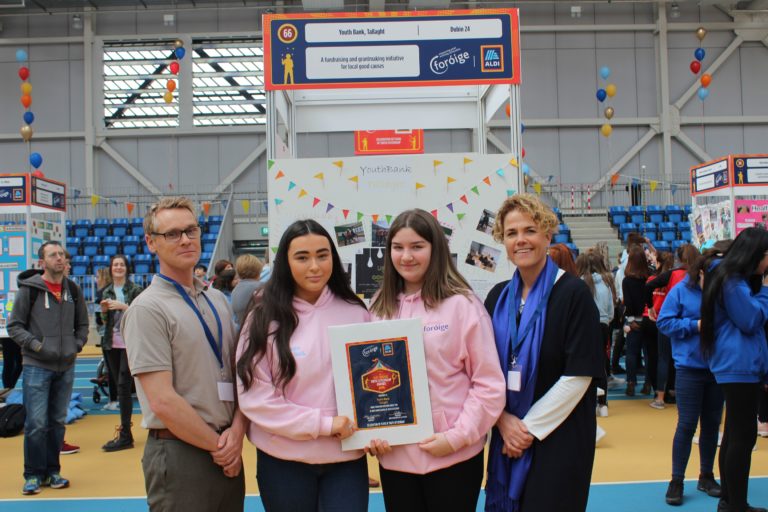 Fifteen projects from Dublin 24 took part in the Aldi Foróige Youth Citizenship Awards recently. This year is the fiftieth anniversary of the Youth Citizenship Programme, which was first run by Foróige in 1969. 2019 has been the biggest year for the programme ever, with over 14,000 young people taking part.

Ard Mór Girls Group – A healthy eating project examining sugar consumption. The Ard Mór Girls Group decided to examine the amount of sugar in food for their Youth Citizenship project. They bought a display board and sugar, measured the amount of sugar in familiar foods and displayed it in plastic bags. They were amazed by how much sugar is in food and drinks, and have decided not to eat mints anymore.

Boy’s Group, Fettercairn – ‘Be clean, be green, be a recycling machine’. Having noticed a lack of recycling facilities, the group decided to make their community centre a more environmentally friendly place. They made posters for the centre with their campaign motto ‘Be clean, be green, be a recycling machine.’ They met with the manager of the coffee dock and asked that they begin to use paper straws instead of plastic ones and start to use real cutlery instead of plastic. They also spoke to the centre manager about getting more recycling bins. The boys plan on keeping their campaign going to make their community both greener and cleaner.

Club Óige Feachtas Tamhlachta – A fundraiser for the local soup kitchen. Club Óige Feachtas Tamhlacht asked a member from the local soup kitchen, called Visit, to talk to them about what they could do for their community in Tallaght. On the back of this the group decided to sell hot chocolate in school as a fundraiser for the organisation to support the great work it does for vulnerable people. The young people learned a lot about planning, getting support from their community and how to run a successful fundraiser.

Costa Del Kingswood Foróige Club – A project to raise awareness about the negative impacts of drugs and alcohol. Costa Del Kingwood Foróige Club were concerned about how easy it was to access drugs and alcohol and they wanted to raise awareness and educate young people about their negative effects. The group interviewed recovering addicts and people who had experienced the impaired mental health due to drugs and alcohol. In addition, they did research online about the topic. They then created a website where they shared all of the information that they had gathered.

Friday Group, Big Picture Youth Café – A music festival fundraiser for the Sunshine House charity. The Big Picture Friday group discussed all of the local problems in their community and decided that they would focus on helping other young people in their area. They chose to do a fundraiser for the Sunshine House charity for disadvantaged children, in the form of a music festival. They booked a space, and are in the process of booking bands, selling tickets, and organising refreshments. The group have been thrilled with the help of the local community, especially aspiring artists who will provide music for the event.

Girls Group, APT Project – A pancake Tuesday event for people with Alzheimer’s. After becoming aware of Alzheimer’s because of the connections of group members, the girls at APT Girls Group decided to get involved with the local Alzheimer’s Day Centre, Rose Cottage. After doing some research and brainstorming different possible ideas, they decided to hold a pancake morning on pancake Tuesday for the people attending the centre. The jobs were delegated between shopping for ingredients, cooking and serving the pancakes on the morning. The young people received great praise from the centre, the people who go there and their school. They have decided to keep a constant link with Rose Cottage and are in the process of organising an Easter Tea Party during their school holidays.

Girls Group, STAY Project – A thank you project for caring people in the community. The Foróige Stay Project Girls Group felt there were a number of people who do great work in the community who do not get very much in return for their time and effort, so they decided to make them feel special. They decided to make gifts for these people, and decorated bowls and filled them with flowers or sweets. They then invited the people they wanted to thank into the project to present them with the gifts and refreshments. The girls were delighted to use their creative talents to make others happy.

Glenshane Girls Group – A community mural and fundraiser in honour of a local young person who passed away. The young people wanted to add cheer to their community and decided to paint a mural on the wall of the community centre. Under the guidance of a professional graffiti artist, the girls were involved in every aspect of the mural from cleaning the wall to coming up with the design and painting it. When the mural was complete they hosted a community coffee morning as a fundraiser in honour of their friend who passed away from an asthma attack. All proceeds raised went to the Asthma Society of Ireland.

Junior Girls, Peer Education Project, Tallaght – A coffee afternoon for elderly people. In order to understand the issues in their area, the Peer Education Project did a map of their community and identified what changes they would like to see. Following this, the created a survey via survey monkey and gathered feedback from the wider community. They learned that anti-social behaviour was a major concern and elderly people in particular felt intimidated by it. The girls wanted to address this and organised a coffee afternoon in the local community centre to bring the community together in a positive way.

KEY Project, Killinarden, GYDP – A bake sale to raise funds for St. Vincent de Paul. In order to identify the problems in their area the group drew a map of their locality and talked about the issues faced by the community. After a discussion the group agreed on the topic of homelessness for the Aldi Foróige Youth Citizenship Project. They researched charities and decided to have a fundraiser donating the proceeds to St. Vincent de Paul. The members organised a bake sale in their local community centre. Their goods sold out and their only wish was that they had baked more!

Path2Coaching, Fettercairn – A football coaching initiative to benefit young people in the community. The members of Path2Coaching love football and they wanted to work with the FAI and do some coaching. They spoke with a previous FAI officer and they suggested that the group apply for Sports Partnership funding and be trained as junior leaders. The members were successful with their application and over the past year have worked with over 1,000 young people across Tallaght! This includes the soccer Academy in Fettercairn, the Fettercairn Youth Café, FAI and County Council summer programmes and projects and ‘Football for All’ a programme for young people with disabilities.

Senior Boys Group, JAY Project, GYDP – Designing a new space in the local youth project. Members of the JAY project helped design the layout of a new space in their youth centre. They spoke with their peers in the project and asked want they wanted. They learned that the members wanted a bigger space with more games. The group contacted Local Community Development Committee and were granted funding for the refurbishment. They got to work clearing the space, ordering equipment and furniture. They now have an area where young people can relax, be themselves, play pool and get away from the stresses of everyday life.

STEM Club – A project to try to build a computer from scratch for the local Youth Centre. STEM Tech Club wanted to donate a modern computer to the Big Picture Youth Centre in Tallaght, which would be able to work with the latest software. They took apart an old computer to understand how it works, and researched computer parts online. They group have applied for a grant from YouthBank and are awaiting the decision.

The Big Picture Youth Café Committee – A drug awareness campaign. The group were aware of the negative impact that drug misuse was having on their community. They talked to the local drug prevention and education officer and also researched the high frequency of mentions of drugs in popular music. The group decided to run a campaign highlighting the negative impact of drug misuse and are in the process of completing a presentation on the theme. They are also designing an art piece and other activities to highlight the issue.

Youth Bank, Tallaght (Pictured at the top) – A fundraising and grantmaking initiative for local good causes. This group of young people were invited to select the theme and fundraise for the grants for Tallaght YouthBank. In order to choose the theme, the group brainstormed ideas with their friends and families. The members felt like their community is often stigmatised and they wanted to address this. They decided that this year’s theme would be, ‘Light Up Your Community’. The group came up with the Terms and Conditions of the grant process and sent a poster to their local schools, community and youth centres and Foróige staff in Dublin South. In order to raise the funds for these grants the group made jars of sweets to be sold to young people at Christmas time. The members are reviewing the applications and are scheduling interviews for those that meet the criteria.