We See You Dads Matter Too 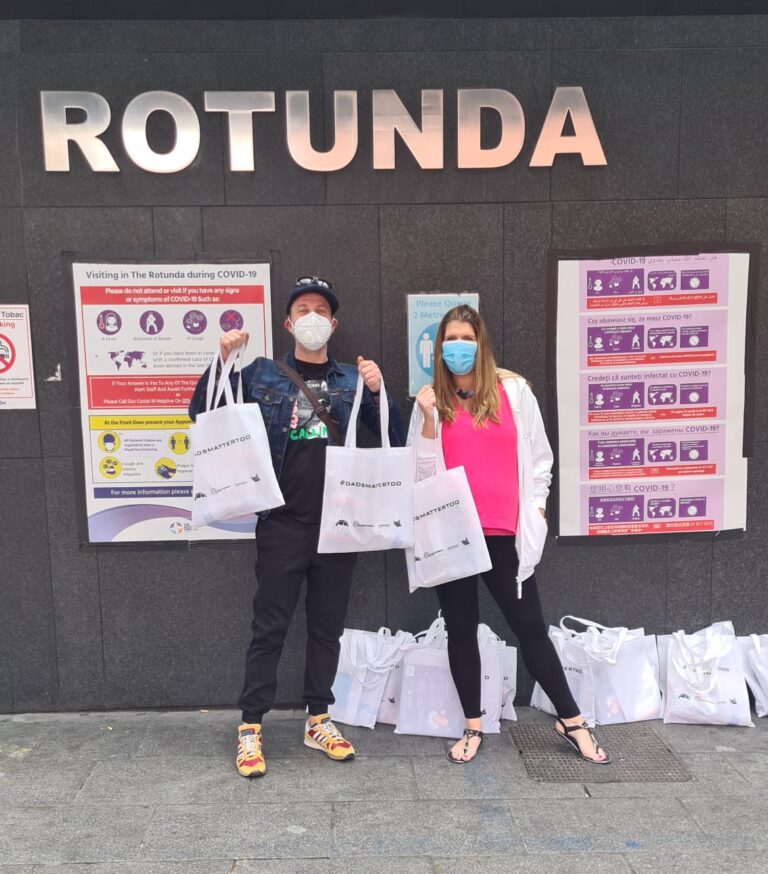 Collaboration between Archways, Blue Skies Initiative & From Lads to Dads, supported by The Síol Foundation and The Community Foundation for Ireland, created a practical but highly effective initiative to give a clear message to these Dads – We See You! You Matter Too!  A carefully developed pack was created with information about free parental support programs offered by Blue Skies Initiative and other Area Based Childhood programs. In addition, programs run specifically for dads at all stages of their parenting journey by From Lads to Dads. These packs also contain two beautiful books, “When You Were Born” and “Before you Sleep” by Benji Bennet (Adam’s Cloud series) – an Irish dad who lost his son, and these books are a tribute to him. Reading books with their children offers dads an opportunity to develop a beautiful bond and express their love.

As these Dads and soon to be Dads are waiting in car parks and outside the maternity hospitals, the pack also contains pens, water, and snacks to pass the time.   They can also use the opportunity to chat about their worries with the From Lads to Dad, Archways and Blue Skies Initiative distributors.

Christina Riordan, Project Coordinator, Blue Skies Initiative, said, “Too often dads are simply not thought of when it comes to the antenatal and postnatal period. We do not provide a space for them to feel included and empowered. This was even more clear during the last 18 months. We have labelled them as “visitors” and “companions” but have ignored that their most important title is “Father”. The sole purpose of this project is to make fathers feel seen and acknowledged. They matter! They matter to their partner, and most importantly, they matter to their child.”

Dave Saunders, CEO of From Lads to Dads, also commented: From Lads to Dads are privileged to work with many Dads supporting them through pregnancy and the perinatal period. However, we are learning that, due to Covid 19 restrictions within the maternity hospitals, fathers have felt excluded, unseen, and “in the way”.

At From Lads to Dads, we are working hard to change that narrative and support dads, helping them feel included by emphasizing the importance of their role. We hear first-hand the many heart-breaking stories from dads – the detrimental effect these restrictions have on them as parents and partners. They are excluded from hospital appointments, missing out on the milestones of pregnancy, unable to support the mother of their child through labour, waiting for a phone call to be told to come into the hospital your child is about to be born, only to be ushered back out just after the birth. These restrictions tell Dads that they do not matter.

This campaign, in conjunction with Blueskies Initiative, is crucial. We need to tell Dads they matter, and their role as a parent is essential. We see you; we are here to support you, to listen to your stories, and to give you a voice. You are not a visitor or a guest – you are a Dad, a partner, and a role model for the next generation, #dadsmattertoo

Sixty-five of these packs have already been distributed to Dads outside the Rotunda Hospital and the Coombe Women & Infants University Hospital. The response was overwhelming; many Dads and Dads-to-be were surprised to realize that they were being recognized in this way.

Thanks to The Síol Foundation, The Community Foundation for Ireland, Archways, Blue Skies Initiative, and From Lads to Dads, over 200 more packs are being prepared and distributed to Dads and Dads-to-be outside Holles Street, The Coombe, and Rotunda Maternity hospitals over the coming weeks.

Dads: We see you! You matter too!