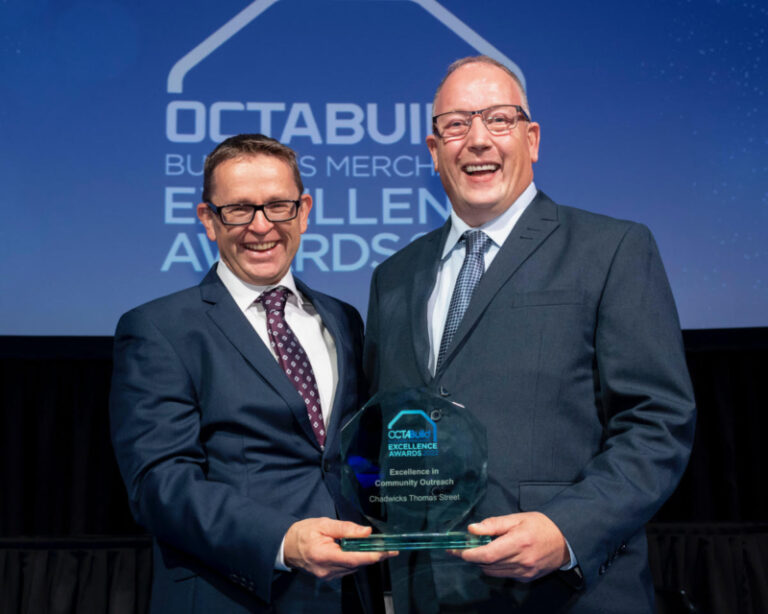 Chadwicks branches in Coolock and Thomas Street have won two out of eleven main awards at a prestigious awards for builders merchants throughout Ireland.The Coolock branch won the Excellence in Business Management Award while Chadwicks Thomas Street won the Excellence in Community Outreach Award in what was the first-ever all-island Octabuild Builders Merchant Excellence Awards. Haldane Fisher Newry won the overall Octabuild Award for Excellence as well as the Northern Ireland Regional Award while other winners came from Galway, Longford, Louth, Meath and Waterford.

The Octabuild Builders Merchant Excellence Awards ceremony was held on Thursday 13th October at a gala event in the Round Room at the Mansion House in Dublin. It was attended by over 300 guests including shortlisted merchants and representatives of the builders merchant trade from across the country. The event was hosted by the eight Octabuild members, Dulux, Etex, Glennon Brothers, Grant Engineering, Gyproc, Irish Cement, Kingspan Insulation and Wavin.

Guest of honour at the awards was Michael McGrath TD, Minister for Public Expenditure and Reform. Congratulating all the winners the Minister said: “I would like to congratulate all the finalists and winners at this year’s awards.  This is the first year the awards were held on an all-island basis and I want to commend the organisers and Octabuild Chairperson, Ray Molyneaux for such a great event.  These are a unique set of awards designed to promote excellence within the Irish builders merchants industry and highlight the importance of the industry to the wider construction and building sector.”

Since these prestigious awards were first introduced in 1986, this is the first year they have been held on an all-island basis. Previously awards were held in Ireland and Northern Ireland on alternate years.

Octabuild Chairperson, Ray Molyneaux said: “It’s important for Octabuild that the Awards highlight to the building and construction industry the excellence of Irish builders merchants amidst its ever-changing landscape. Congratulations to all finalists and winners from all over the country who represented absolute excellence in the industry.”

Commenting on the quality of the entries, Chair of the independent Judging Panel, Liam O’Gorman, said: “It is evident that the industry has evolved hugely and that merchants have led the way in embracing this changed landscape. These merchants have transformed their processes, systems and operations to reflect this new way of doing business.”

In total eleven awards were presented at the awards ceremony including an Octabuild Lifetime Achievement Award, which was presented to Brian Wogan, Dunleer Hardware, Dunleer, Co Louth.

In addition to the awards won by Chadwicks Coolock, Chadwicks Thomas Street and Haldane Fisher Newry, other winners were: