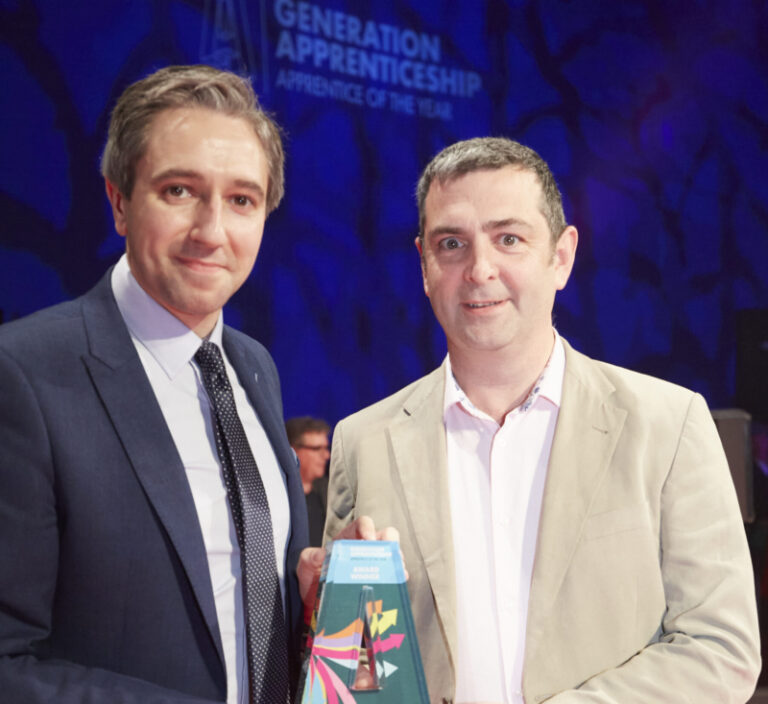 Minister for Further and Higher Education, Research, Innovation and Science, Simon Harris, TD presented the awards to 12 exceptional finalists, out of 187 nominees from every county in Ireland. The inaugural Apprentice of the Year Awards ceremony was held on Tuesday October 25th 2022 in the Round Room of the Mansion House in Dublin. 500 guests from across the apprenticeship system, including employers, educators, apprentices and their families, attended to celebrate the outstanding contributions and achievements made by Ireland’s 25,000-strong apprentice community. Three Dubliners have received a finalist’s award in recognition of the outstanding contributions they have made as outstanding apprentices. Apprentices were nominated by their employer or educational partner, and judged on four essential categories – leadership, teamwork, creativity, and problem solving.

Lucan local Brian Riordan, 4th-year Electrical apprentice at the Designer group, beat fierce competition across the country, to take home the top national title as ‘Apprentice of the Year’ from 187 entries. Dubliners Dean Doyle, Motor Mechanic at Frank Keane Motors, and Gary Mullen, Plumbing Apprentice at Tritech Electrical scooped one of the top finalist prizes on the night, for their exceptional talent.

Apprentice of the Year Brian Riordan says of his win, “I’m absolutely delighted to win the Inaugural Apprentice of the Year! And I’m thrilled, absolutely thrilled, and lost for words, honoured and humbled by winning this. I work for Designer Group. They gave me the opportunity to restart my career, which I’m very grateful for. I was made redundant from my last job, and I was suffering stress and stuff from that. And this gave me the opportunity to change. No matter where you are in life or whatever, there’s options open and once you choose to do something there’s always some way to do it. I went a completely different pathway and then in the last few years, decided to change and I found that it really worked for me and the earn while you learn bit is what made all the difference.”

Award winner Gareth Mullen, Plumbing apprentice at Tritech Electrical said: “I was on the team completing essential works in Dublin Airport during the pandemic. It was the extension of the immigration hall to deal with the increase of non EU passengers following Brexit. It was on this job that I learned the skills to push me forward and I developed a love for my trade and a sense of pride in my work. This helped me achieve my nomination for apprentice of the year with Tritech and I am delighted and honoured to have secured a category win the Generation Apprenticeship Apprentice of the Year competition.”

Employer Frank Keane Motor says of Dean: “Dean is an excellent apprentice who has become an integral part of our fast-moving retail technical team at our Naas Road workshop. He will always endeavour to “think outside of the box” when faced with a difficult fault or customer situation. Dean is a huge team player who works extremely well with Senior technicians. Dean has quickly progressed to be a trusted individual who our frontline service advisors and parts advisors rely upon for technical advice. A good demonstration of Dean’s team spirit is most recently, when he recognised that another technician in our used vehicle preparation workshop was unsure of the operation of an electronic steering rack preload gauge and Dean travelled to this workshop to assist the technician and demonstrate the use of this gauge as he had used this gauge many times previously.”

Tritech Electrical says of Gareth “I would say that teamwork is one of Gareth’s strongest traits. Gareth enjoys working in a team environment, he has been involved in numerous large-scale projects with Tritech. Gareth is quietly confident and takes direction really well, he very rarely raises his voice but always gives valuable input which makes him an ideal team player. When we come across inevitable issues on site, Gareth will probe, ask questions, and give suggestions to try to resolve the problem regardless of whether they come to fruition or not. It is this lack of fear that leads him to produce solutions to problems on a regular basis.”

He added, “Apprenticeship is a vital lever for the continued economic prosperity of this country – it not only unlocks the skills and expertise necessary for leading Irish businesses, but also will help us to achieve critical aims in the Programme for Government, including on housing. This is a really exciting time for apprenticeships and tonight is a chance to celebrate our apprentices and the businesses who have taken them on. I would encourage anyone to consider an apprenticeship. This is third-level education and you can earn as you learn. It is time to get involved and help us build the next generation of apprentices.”

Dr Mary-Liz Trant, Director of the National Apprenticeship Office, said, “It is clear from the many, many talented and dynamic nominees in the first ever Apprentice of the Year Awards tonight that the conversation around apprenticeship is changing. Apprenticeship is a pathway into a great career, and a choice that both apprentices and businesses can be very proud of taking. I’d like to thank all of the apprentices, businesses and families here this evening – and also thank our independent expert judging panel for all their hard work in making some very tough choices.”