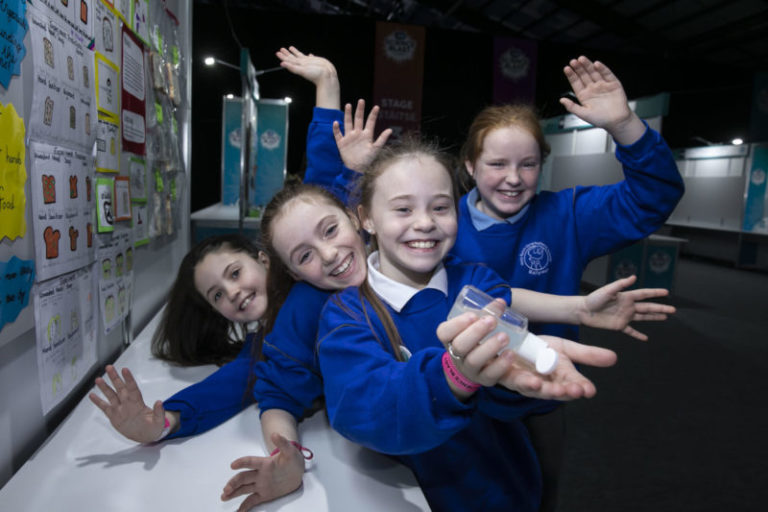 A survey conducted on behalf of the Royal Dublin Society (RDS) reveals three quarters of primary school students feel adults don’t take climate change as seriously as 8-12 year olds. It also revealed the high esteem that children have for scientists with 71% of primary school students trusting scientists. The same survey also showed that most children (61%) are curious enough and feel confident enough to ask questions in class. The encouragement of curiosity and questioning is an important part of ESB Science Blast.

Over 2,000 primary school students were part of this nationwide survey, just some of the 12,000 children that take part in the 2020 ESB Science Blast Dublin showcase event. At this year’s ESB Science Blast, a STEM programme developed and delivered by the RDS, more than 15,000 primary school students will showcase their STEM investigations at showcase events in Dublin, Belfast and Limerick. The first event takes place in Dublin from March 2-5, where 12,000 primary school children will take part. Thursday, March 5 is ‘An Lá Specialta na Gaelige’ catering exclusively for Gaelscoileanna.

The survey findings on climate change coincide with a spike in environment-related investigations at this year’s ESB Science Blast; there has been an 81% increase in environment-related investigations by classes in 2020 compared with 2019. The children’s trust in scientists at 71% is close to that of adults’ trust in scientists, which the 2020 Edelman Trust Barometer found was 79%, one of the highest trust scores in this year’s Barometer. Curiosity and questioning are two of the key drivers of scientific discovery which is why the RDS was interested in how many children feel confident enough to ask questions in class. Both are also closely aligned to the four ‘C’s of STEM learning, which ESB Science Blast helps to cultivate: Critical thinking, Creativity, Communications and Collaboration. The survey also looked at whether there was any difference between boys and girls in asking questions in class. But there was no significant difference, with both mirroring the overall result. ESB Science Blast gives an entire class the opportunity to engage with STEM by giving them the tools and methodologies to investigate a simple question about the world around them. By enabling participants to choose a question that interests them, ESB Science Blast shows children how STEM skills can be used in everyday life to solve problems, find better ways of doing things and learn about the world around them.

Parents & Students Agree on STEM’s Importance; There is attitudinal overlap between today’s findings and 2019 Red C research commissioned by the RDS, which showed parents understand the critical role of science in their children’s education. According to this research, 83% of parents believed a good understanding of science is needed to live and work today. The majority (82%) also believed basic science education would give their children an advantage in life. A large proportion of parents (64%) talk with their children about science subjects and activities in their school.

“The trust in scientists is a particularly hopeful finding for this next generation”, says Michael Duffy, RDS CEO. “The awareness of the seriousness of the climate challenge at this young age is not surprising, but this survey asks us to question how we can do more to take on this challenge.”

Speaking about why the RDS operates this STEM programme he said: “The RDS has been cultivating interest in science and helping to develop science skills in Ireland for generations. International evidence shows that positive interaction with STEM at a young age can make a vital difference to later education and life choices. We hope that all participants enjoy exploring the amazing possibilities of science through their investigation and that for some of them this is the start of a life-long interest”.

Pat O’Doherty, Chief Executive of ESB, the title sponsor of ESB Science Blast, added: “ESB is committed to supporting STEAM education and learning as a way of empowering young people to fulfil their potential and encouraging them to positively engage with the issues and challenges facing society. ESB Science Blast taps into the innate curiosity and creativity of children to help them develop key 21st century skills that will enable them to critically assess the world around them and become the problem solvers and influencers of the future.”