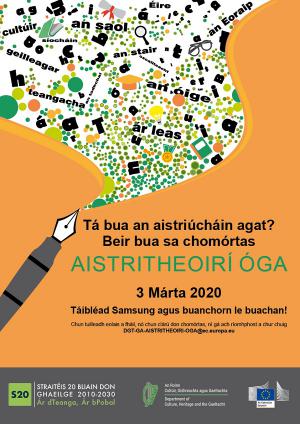 The winners of the ‘Aistritheoirí Óga 2020’ (Young Translators) contest were announced recently.  Five secondary school students made the list – one from each of the four provinces in Ireland (translations from English to Irish) and one who was selected for her excellent translation from French to Irish.  This year’s winners come from Derry, Dublin, Galway and Limerick.  It was the Connacht winner, Bláthnaid Ní Fhátharta from Galway, whose translation was chosen as the best overall translation in the country.

Senator Seán Kyne, Government Chief Whip and Minister of State for the Irish language, the Gaeltacht and the Islands said ‘I would like to congratulate all of the winners.  This competition is a wonderful opportunity for young people to gain a first insight into the work of a translator.’
For more of what the Minister had to say, please see his video message to the winners;

Speaking about this year’s contest, Caoimhe Ní Shúilleabháin, the Competition Coordinator at the European Commission pointed to the increase in participation in the competition (now 34 schools) as an indication that ‘students clearly enjoy this challenge.’ Ní Shúilleabháin went on to say that ‘it encourages them to think about languages in a different way and hopefully to consider using their languages in their future careers.’

This is the third edition of ‘Aistritheoirí Óga’, a now annual translation contest organised jointly by the European Commission and the Irish Government. The contest has three goals: to promote a high standard of Irish, to encourage multilingualism among secondary school students and to encourage their interest in linguistic professions.

Over 90 students from 34 schools took part in this year’s contest and students translated from English, French, German, Spanish and Italian to Irish.

The best translation across the island of Ireland:

The best translation (English to Irish) from Connacht

The best translation (English to Irish) from Leinster

The best translation (English to Irish) from Munster

The best translation from (English to Irish) Ulster

The best translation from a language other than English

The background to the competition

The first edition of the contest was launched in October 2017. It is open to pupils who are at least 15 years of age.

The competition is part of a wider effort to raise awareness of the importance and benefits of the status of the Irish language as an official language of the European Union. Council Regulation 2015/2264 laid down that the Irish language will have full status as an official language of the European Union by 2022 and that all the legislation which is enacted in the Union will be translated into Irish from that date, as is already the case for the other 23 official languages. For that reason, the EU institutions are looking for more Irish-language staff to do the work necessary to fulfil the obligations arising from the full status granted to Irish.

PrevPreviousMinister must provide answers on how Pieta House funding is being spent
NextSurvey for Swifts in South Dublin County to take place this summer!Next
NewsGroup