Newsgroup has two family tickets to win for the Olympia Panto Cinderella on the 1st of January 2020!

To enter just email info@newsgroup.ie with your name, address and contact phone number by 2nd of December 2019. 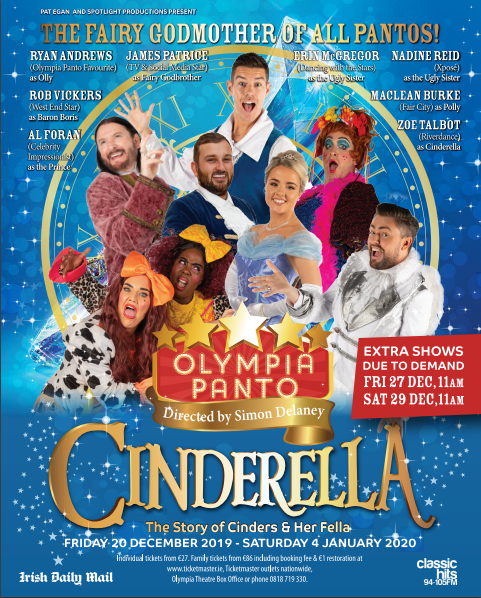 So for the first time since the 60’s and the days of Jack Cruise, the Olympia Pantomime will have extra morning shows at 11am on Friday 27th and Saturday 28th December 2019. On both these days we will have shows at 11am, 3pm and 7.30pm. As everyone has discovered, The Olympia Theatre Pantomime is now THE MUST SEE Panto in Dublin!Ireland’s funniest family Panto is back and bigger than ever – it’s simply unmissable! With a glittering Celebrity line-up, traditional Panto values and the funniest script, this year will be as star studded and surprising as ever.  There’s something for everyone in this magical panto with stars of stage and screen and social media’s biggest and brightest!

Running from Friday 20th December until Saturday 4th January, matinee & evening shows most days. With 11am shows on 27th & 28th December. Please note, there is no show on 24th & 25th December. Individual tickets priced from €27 and family tickets priced from €86 including booking fee & €1 restoration levy are on sale NOW via www.ticketmaster.ie, usual Ticketmaster outlets nationwide (list here) including The Olympia Theatre Box Office, and by calling Ticketmaster at The Olympia Phone Bookings on 0818 719 330.

The fees for this event include a €1.00 restoration levy. The restoration levy will allow The Olympia Theatre to invest in maintaining and enhancing the theatre to ensure that it continues to consistently deliver the highest quality experience for theatre goers, actors, performers & producers. Under 14’s must be accompanied by an adult, Over 18’s ID required to gain access to the bars where alcohol is served.

‘CINDERELLA: The Story of Cinders and Her Fella’ is bursting with character…

Joining Polly and Olly, are none other than Social Media Stars JAMES PATRICE (Fairy Godbrother)and ERIN McGREGOR (Ugly Sister)….Literally loved by hundreds of thousands on Instagram and snapchat you will also recognise them from Dancing With the Stars!

Throw in our Panto Baddie Veteran ROB VICKERS (who has starred in Les Miserable on the West End no less) and a cast of over 100 of Ireland’s most talented kids, this Panto is a sure-fire showstopper!

And finally, our Director is TV star SIMON DELANEY.  This year’s Olympia Panto promises the biggest stars and even bigger laughs in the best family show in Ireland!

THE OLYMPIA THEATRE: The Olympia is one of Ireland’s most prestigious theatres. ‘CINDERELLA: The Story of Cinders and Her Fella’ continues the Olympia’s decades long tradition of bringing the biggest and best to the stage every Panto Season.

Pat Egan and Spotlight Productions are delighted to present the funniest, most magical Panto in Ireland at the Olympia Theatre this Christmas.   With an All Star Cast along with the talented dancers and performers from Spotlight, you’ll be dazzled this Christmas in a spectacular action packed Panto for all the family.