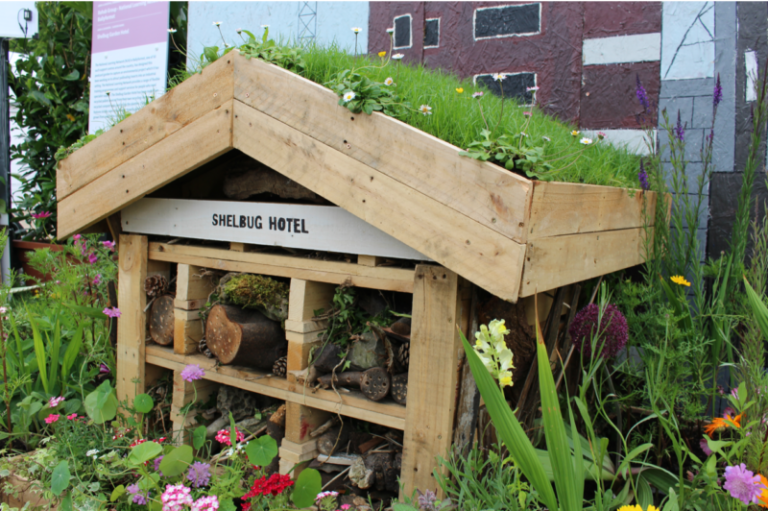 Students and staff of National Learning Network Ballyfermot, a supported training college, showcased their wildflower garden and bug hotel at Bord Bia Bloom during the June bank holiday weekend, proving popular with the thousands of festival attendees, as well as the bees and insects of the Phoenix Park. The ‘Shelbug Hotel’, costing less than 50 euro to create, took up residence in the Postcard Garden section of the annual festival. The project promotes biodiversity, and is designed to attract pollinating insects, mostly consisting of plants grown within or around the training centre and upcycled wooden pallets.

Mark, a student at NLN Ballyfermot, said: “Instead of using pallets for bonfires at Halloween, we are showing that we can use them for something that will last all year round. This project is designed to promote sustainability and pollination. The Shelbug Hotel will benefit the bees, the ladybugs, and all the little insects, it’s somewhere for them to have a home during the winter. It’s an essential part of life; we need them”.

Sean, a student on the Access course, said: “We planned the project together, and it only took a couple of months to make. It’s mostly all recycled stuff.”

Traci Marshall-Dowling, manager at NLN Ballyfermot said: “Ballyfermot is quite an industrial setting, so we allocated an area for the students to co-design and they created a community garden. One of our students, who wants to become an architect, came up with the idea of a bug hotel, alongside our instructor Matthew.”

Reclaimed wooden pallets were donated to the project by Rehab Recycle, the social enterprise, while some of the plants were provided by RehabCare Ballyfermot. Students dug up marigolds and seeds from the local area to incorporate into the wildflower garden. The mural backdrop is made from recycled chipboard and left-over paint.

Matthew, an instructor at NLN, described the vision for the project: “The area we’re situated in has a lot of concrete and brick, so we’ve tried to bring a bit of a paradise into a very urban setting. It’s bringing a more diverse habitat into the area. Nothing has come from far and wide, it’s all local. We’re absolutely delighted with the result”.

Traci continued: “The application for Bloom was all done in a bit of a panic, we put in our entry on the last day, right before 5pm. Once we began work on it, the project was open to anyone who wanted to come in and get involved. Some students worked by sowing and growing the plants while one student painted the mural backdrop. Other students were more interested in the woodwork and crafting the hotel structure. It’s so nice to see how well it all came together.”

The Shelbug Hotel has now been transported back to NLN Ballyfermot’s training and educational centre to be enjoyed by the students and staff of NLN, as well as RehabCare and Rehab Recycle. Traci said: “We’re going to build grass benches and garden furniture out of upcycled pallets, and create a ‘zen’ area at the centre, which will be great for some of the students who need a quiet place during the day.”

Speaking about his training at National Learning Network, Sean said: “I cook every Friday in NLN for the staff and students. After I finish the Access course, I am going to move on to the Vocational Skills Foundation course. I’d like to learn to drive. I would like to get a job in horticulture or woodwork.”

Mark said of his training at NLN: “What makes it different is that there’s multiple things you can do. You’ll get the assistance that you need. Whatever you need, they will help you. They’ve helped me out a lot. I look forward to getting up in the morning and going out and actually doing something. It’s benefitting me during the day, and I know I have something new for the next day”.

Speaking about the style of learning at NLN, Traci said: “I’m a believer in encouraging students to be involved in their own learning. We say to them, if there is something you want to do, tell us what it is, and let’s go do it – we will give you the resources to do it. At NLN Ballyfermot, we have a digital hub for gaming, podcasting and movie-making. We have a retail hub – all built, designed, and created by the students. We do fitness classes, yoga and stress management in our gym area in the centre. We’re able to cater to everyone, to their own talents and interests.”