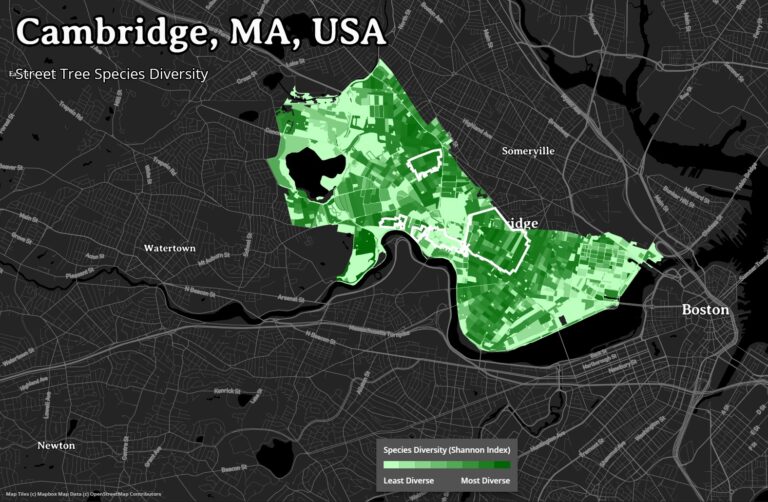 The results of a research project, led by researchers from University College Dublin (UCD) and Massachusetts Institute of Technology (MIT), which diversifies our understanding of trees within cities, have just been published with open access in Urban Forestry & Urban Greening.

Street trees specifically are an important part of the urban forest, softening the harsh building-street interface and filtering the air between pedestrians and traffic. Accounting for diversity when managing an urban forest can help to support and to enhance the ecosystem services provided to citizens and minimise management expenses.

Associate Professor Francesco Pilla, UCD School of Architecture, Planning and Environmental Policy, co-Director, UCD Spatial Dynamics Lab, and a member of the research team said, “Increasingly we are recognising and appreciating the importance of the urban ecology and the diversity of our trees. One might ask why your typical city dweller would care about tree diversity on the streets they walk, but it is an important factor in providing a healthy urban forest and a healthy city. Understanding and learning from tree diversity patterns in cities around the world was a key goal of this research project.”

As part of the study researchers from UCD, the MIT Senseable City Lab, University of British Columbia and the Pontifical Catholic University of Paraná (Brazil) explored how street tree diversity contrasts between the eight city centres and outer areas. The researchers created open-source Python notebooks to compute tree diversity in these cities across two diversity indices (Shannon and Simpson Indices) and the 10/20/30 rule.

The Shannon Index puts more weight on richness, i.e. how many different species are there including the very rare one, while the Simpson Index puts more weight on dominant species, i.e. rare species don’t make much difference. Urban foresters have long used the 10/20/30 benchmark to measure diversity. The rule suggests no more than 10% of an urban tree ecosystem should be made up of the same species, 20% of the same genus, and 30% of the same family.

From the eight cities studied, the researchers found that diversity indices show greater diversity outside of city centres, especially at the species-level and that native species were the most abundant species in just one city’s (Amsterdam) street tree inventory. In addition the study showed that none of the cities met the 10/20/30 or even a 5/10/15 benchmark, except Amsterdam’s outer area.

Lead author on the paper, Dr Nadina Galle, currently a postdoctoral researcher in the UCD Spatial Dynamics Lab said, “Urban forests with lower species richness face greater risks of mass mortality and canopy cover loss from the introduction of species, or genus, specific pests and diseases. This is exemplified by the mass mortality events of elm, ash, chestnut, and oak trees, by Dutch elm disease, and other diseases which have collectively killed over 100 million urban trees across North America.”

She added, “Quantifying tree diversity within a city is key to our understanding of urban forestry. In this regard Diversitree is important as it provides a methodical workflow for other cities, including Dublin, to compute their own street tree diversity, helping the cities to maintain and enhance the ecosystem services urban forests provide to citizens.”

Dr Galle undertook this research project while a PhD candidate at the UCD Spatial Dynamics Lab, under the supervision of Associate Professor Pilla, and while on a Fulbright research fellowship at the MIT Senseable City Lab.

Carlo Ratti, Director, MIT Senseable City Lab added, “Part of the beauty of a city is the urban forestry that makes each city their own place and the work of this paper enables cities to start the conversations of the importance of diversifying their urban ecology by using our open-source data. This study is intended to enable practitioners to better target tree diversity efforts.”

The results of this research project have been published open access in Urban Forestry & Urban Greening in a paper entitled, ‘Mapping the diversity of street tree inventories across eight cities internationally using open data’ which is available via https://doi.org/10.1016/j.ufug.2021.127099.

This research project received partial funding from the Connecting Nature project (Grant Agreement No. 730222) under the European Community’s Framework Program Horizon 2020, of which UCD is a partner.