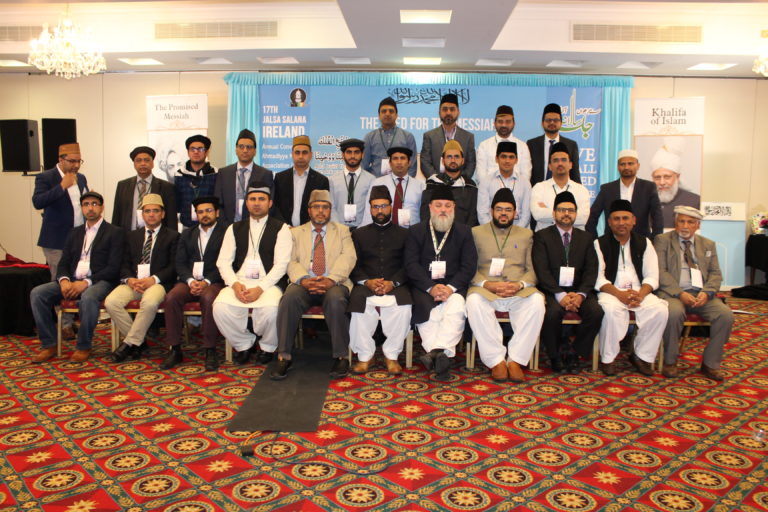 On Sunday 1st July the Ahmadiyya Muslim Association held its 17th Jalsa Salana (Annual Convention) in Glenroyal Hotel, Maynooth. This year 347 Ahmadi Muslim men, women and children from all over Ireland gathered in order to reaffirm their rejection of violence and extremism, as the community is totally committed to eradicate all forms of extremism that is furthermore evident in its motto of ‘LOVE FOR ALL, HATRED FOR NONE’.

The Jalsa Salana is the formal annual gathering of the Ahmadiyya Muslim Community initiated by Hadhrat Mirza Ghulam Ahmad, the founder of the community who claimed to be the awaited Messiah and Mahdi. He stated that such conventions should not be ranked in the league of other human assemblies. But rather the objectives of this spiritual gathering is to broaden the knowledge, deepen the understanding of God Almighty and inculcate brotherhood amongst members of the community. Today these conventions are being held globally on a national scale in their respective countries and are well visited by national & international politicians, guests from different faiths and friends of the community.

Throughout the Jalsa day there were many speeches in both English and Urdu delivered by members of the community. In addition to this His Holiness Hadhrat Mirza Masroor Ahmad the Worldwide Spiritual Head of the community and Khalifa of Islam sent his special envoy Imam Aziz Bilal Ahmad (UK) to also attend the convention and address the gathering. Alongside this His Holiness also sent a special message that was the highlight for the day.

Whilst addressing the members in his special message, His Holiness wrote: “The state of the world at the present time is such that it is vital that mankind turns towards Almighty Allah, our Creator, and that all people on this earth resolve to live with each other in an atmosphere of peace and harmony, treat each other with respect, and strive to fulfil everyone’s rights in a spirit of universal brotherhood.”*

He further stated: “It is significant that members of our worldwide Jama’at always endeavours to be law-abiding and exemplary citizens of the countries they reside in, and they strive to integrate and co-operate with their fellow citizens in the best manner for the beneficial development of the country. This is because it is a fundamental teaching of our Holy Prophet Muhammadpbuh that
love of one’s country is an integral part of one’s faith. Therefore, members of Ireland Jama’at should remember that displaying loyalty and passion for your nation is an essential ingredient in your contribution to maintaining peace and harmony among its people.”*

The Jalsa day began at 9:50 am with the flag hoisting ceremony. The Jalsa day was covered by Muslim Television Ahmadiyya Ireland. The Day was divided into three session.

During her address, Cllr. Emma Murphy expressed her delight to be invited to the Annual convention. She further appreciated the work of the community. She further mentioned about how she likes being amongst young people and further expressed her happiness in seeing many of them in the organising teams of today’s event. She lastly appreciated the integration of the community into the multi-cultural society.

Thereafter Mrs. Ruth Coppinger TD addressed the gathering.  She thanked the Ahmadyyia community for the invitation. She spoke of the problems of migrant community and disapproved of how the refugee crisis is being handled globally.

Next Sgt. David McInerney had the opportunity to address the gathering. He thanked to be invited on the Annual Convention and appreciated the good work undertaken by Ahmadyyia Community. He further mentioned that discrimination is unacceptable and will not be tolerated and consoled the community that the Garda are always willing to help face any threat or incident.

Imam Aziz Bilal Ahmad then took to the stage and thanked all the respected and honourable guests attending the convention. In his address he explained various aspects about how Islam is truly a religion of peace. He further introduced His Holiness’ book entitled ‘World Crisis and Pathway to Peace’ and spoke about the ongoing efforts that His Holiness has made for establishing global peace. He also extended an invitation to all the guest speakers to visit the Annual Convention in UK that is held on a much larger scale and is attended by over 30,000 people from all across the world. The session ended with a silent prayer.

At 1.00 pm there was break for Lunch which was also joined by the external guests. They were also given a tour of the exhibition that had been arranged in the lobby.

In the last session, Academic Awards were distributed to members of the community who have achieved excellence in their fields. The Jalsa Day ended with the address of Imam Aziz Bilal Ahmad who exhorted members in regards to inculcating the noble qualities and characteristics of the companions of the Holy Founder of Islampbuh and further establishing a living relationship with His Holiness, Hadhrat Mirza Masroor Ahmad, the Khalifa of Islam. This was followed by a silent prayer and group photos.

Breast Cancer Awareness applies to all women regardless of age