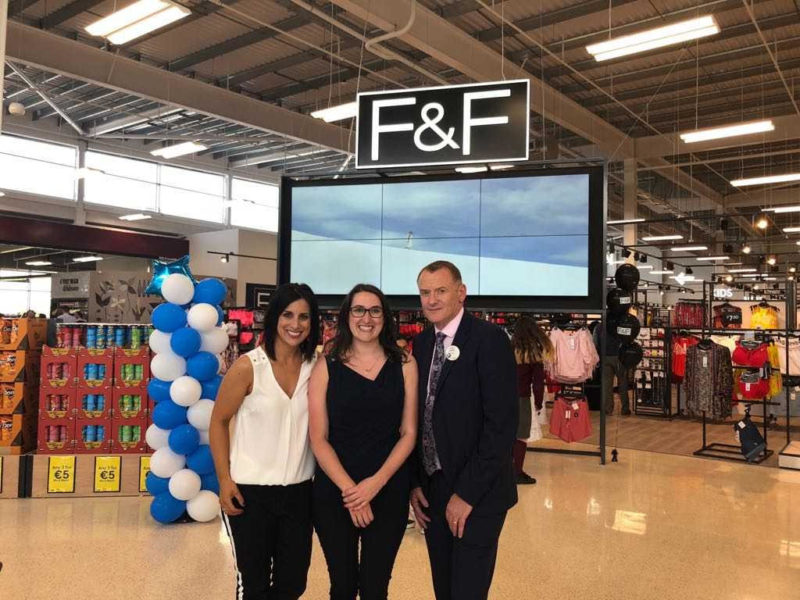 Tesco Extra opened to much fan-fair this week at the retail centre in Liffey Valley. The €30m store is the largest in Ireland and has created 75 local jobs. Local General Election candidate Cllr. Emer Higgins attended the official opening alongside RTEs Lucy Kennedy.
Speaking at the opening Cllr. Emer Higgins said, “I’m so impressed by the new Tesco – it’s absolutely huge and offers great parking, a massive fresh fruit and veg section, the largest clothing selection of any Tesco and even a Costa Coffee shop. It’s fantastic to see such investment locally. The Store Manager, Robbie Kelly, told me that about 80% of the 175 jobs created were filled by people in the local area. Creating local jobs is something I’m really passionate about and it’s fantastic to see Tesco so committed to ensuring that the store plays a positive role in the local community. Through their Tesco Community Fund they’ll be supporting local charities and community groups and that’s going to provide much needed funding to organisations that matter in our communities. Already three local groups, The Clondalkin Youth Band, Liffey Valley Rangers FC and the Quarryvale Centre, have been selected to benefit from the charity strategy.
“The Liffey Valley store will be donating all it’s surplus food to charities, clubs and organisations such as those working with homeless communities. Tesco practices corporate social responsibility through it’s commitment to environmentally friendly practices and it’s collaboration with FoodCloud. From what I hear they’re a great employer too and have been leading the way in the retail sector when it comes to providing certainty around contracts and scheduling to it’s employees. I was delighted to welcome Tesco to Liffey Valley and wish them every success here in our local area,” concluded Cllr. Emer Higgins.
The new flagship €30m Liffey Valley Tesco store is 60,000 square feet in size and is a cutting-edge architectural design that is highly carbon efficient with several environmental features built in including energy-saving measures, advanced lighting, heating and cooling systems and waste recycling facilities. The new opening is part of Tesco Ireland’s €70m store investment programme which is modernising our property portfolio and developing new stores across the country.