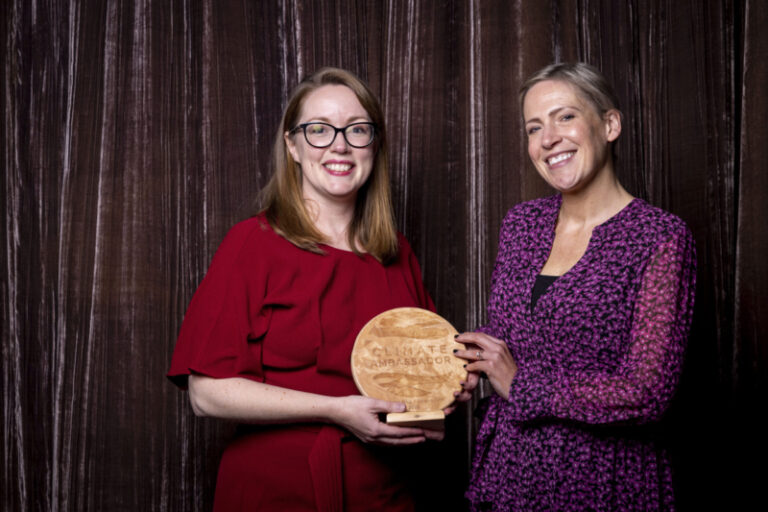 In 2022, Climate Ambassadors completed 661 climate actions, directly engaging over 274,000 people, creating 2,671 climate communications, and reaching an estimated 5.6 million people! The Climate Ambassador Awards were held on Friday, November 18th, serving to recognise the tremendous effort and dedication demonstrated throughout the year. Each Climate Ambassador received a certificate of recognition, with an additional twelve awards presented to teams and individuals from swap shops and flash mobs, to musicians and artists, sports stars, farmers, social entrepreneurs, community activists, businesses and universities. This year, four of the groups or individuals are Dublin based.

Gobnait Ní Neill – Drimnagh, Dublin 12. Gobnait is never afraid to get stuck in outdoors. Not only is she passionate about raising awareness of the climate and biodiversity crises on social media, but she has also been busy organising and delivering mini pond workshops, biodiversity, bird and bat walks and planting over 280 native trees. She is founder of the Drimnagh community environmental group and more recently the Grassroots Guild supporting community environmental action.

Mark George – Dun Laoghaire, County Dublin. Mark is active on social media, always highlighting the work others are doing and lifting us up in what can often be a negative space. As a tweeter, he’s a ray of sunshine, nudging over 165,000 people along in a sustainable direction this year, and he’s an avid citizen scientist. He has planted over 200 trees this year and as part of his role as leader of a biodiversity group, has made strong links with Sandyford Business district, the Native Woodland Trust, ReWild Wicklow, Snapshot Europe, and Friends of the Grand Canal.

Flash Mob Team (from left to right): Cathy Baxter presents the award to Fionn Fitzpatrick, Angela Deegan and Tiffany Zhou. This group demonstrated a fun and creative way to grab media attention for climate change. In total they did four flash mob performances in Dublin in North Earl Street, Trinity and Stephens Green. Individually, they carried out various actions including the installation of water butts, swap shops, food waste workshops, beach cleans and Cycle-4-Climate events. Communications ranged from organizing peer parliaments, radio interviews and using their platforms to document sustainable travel via bike and rail. The flash mob was produced by Angela, designed by Tiffany and filmed and edited by Fionn.

Swap Shop Social Team (from left to right): Rachel Thornburgh, Alex Reilly, Karolina Pawlak, Rachel O’Loughlin and Rachel Harris. This group of women are powerful individually, but together, they are even stronger! A great team to see in action – always happy to lend a hand and keen to share their sustainable fashion principles. Each of them have used their platform, to influence and share their knowledge on sustainable fashion, as well as working on other areas such as sustainable food, cooking and wildlife conservation.

Climate Ambassadors; 191 citizens from a wide range of backgrounds including primary school teachers, secondary school students and teachers, university students, academics, farmers and businesspeople were all chosen to be Climate Ambassadors in 2022. The programme, which has been in operation since 2018, has become stronger over time as Climate Ambassadors have acquired crucial skills and confidence to take action, motivating others to follow in their footsteps along the way.

Climate Ambassadors receive training at the start of the year in climate science, solutions and communications which enables them to carry out climate actions. Throughout the year they are asked to undertake four key actions – two climate communications and two climate actions, though many participants get involved in many more projects. This programme allows individuals to join a strong network of dedicated people who share knowledge, gain insight from one another, and forge long lasting relationships.