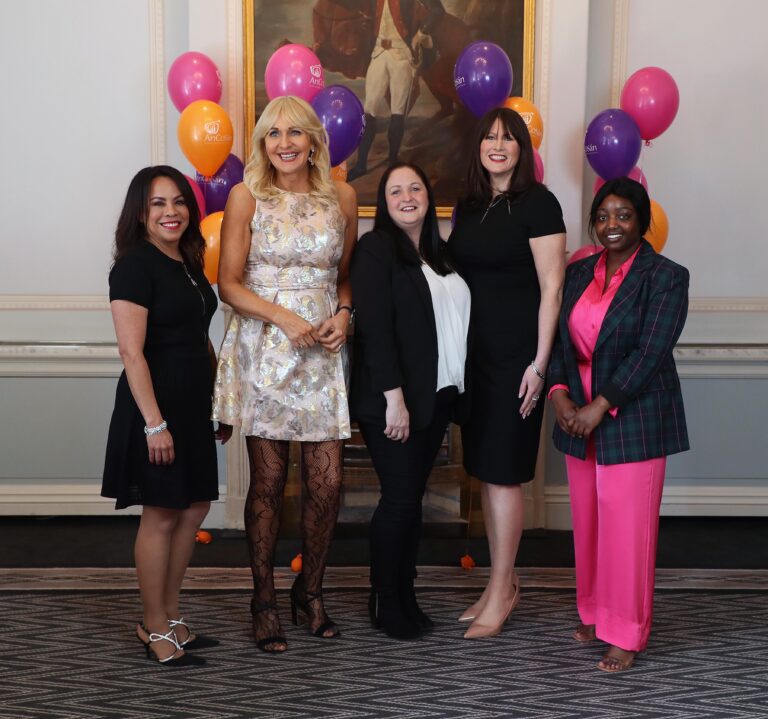 Two adult learners, one from Tallaght and one living in Tralee, have shared how their experience of adult education with An Cosán has transformed their lives and given them a more secure and sustainable future. Paula Ryan from Tallaght and Rudo Chitseko, who is originally from Zimbabwe but has been living in Kerry since 2015, were speaking at an annual fundraiser lunch in The Shelbourne on Friday 1st April organised by Ireland’s largest provider of community education. They received a standing ovation after sharing their stories.

Miriam O’Callaghan, who volunteered her time as MC for the event, interviewed the two graduates about their experience of community education and the impact it has had on their lives.

Paula Ryan, an early school leaver from Tallaght, told her story of how adult education with An Cosán had impacted every aspect of her life in a positive way. Paula, who is on her sixth course with An Cosán and hopes to undertake a BA in Leadership and Community Development, said: “An Cosán has empowered me and inspired me, it’s taught me how to be a better person. I have more patience and empathy now. It’s made our home a happier home and I am more involved in the community now.”

Paula, who has completed courses in computing, business administration and Special Needs Assisting with An Cosán, told guests she would not have been able to pursue education if it had not been for the additional supports offered by An Cosán. “I couldn’t believe everything I was offered,” she said. “I availed of everything – the financial supports, the free Early Years’ education and care for children, the one-to-one tutoring and mentoring, the laptop loan scheme, the support with digital skills and the counselling. We got loads of support when Covid struck and the courses went online overnight; there was always someone we could ring and talk to.”

Rudo described how she started a BA in Applied Addiction Studies and Community Development with An Cosán while living in direct provision in Killarney. She graduated in January during the Institute of Technology Carlow’s Lifelong Learning Conferring Ceremony (IT Carlow is the accreditation body for An Cosán’s degree programmes) and plans to become a social care worker.

Rudo said she wanted to support others the way she was supported. “I want to give back to the community,” she said. “I don’t want to be just living; I want to make a difference. The reality is we live in communities, so we have to make them good places to be.”

Anna Durkan, Board Chair of An Cosán, told supporters and partners that providing women with education and opportunity was the way to improve our society. “By educating a woman, you create a ripple effect that spreads out and touches the lives of so many others around her,” she said. “Through that ripple, you have the key to transformation, the key to active citizenship, to breaking the cycle of disadvantage. This is the foundation of our One Generation Solution to poverty, and we know it can be achieved.”

An Cosán CEO, Heydi Foster, said An Cosán was there for any woman who needed its services and would be working to support women and children fleeing from the conflict in Ukraine. “So often women bear the brunt, as we are now watching unfold in Ukraine,” she said. “Once again, we are seeing women in their millions forced to flee to places and situations they don’t understand and over which they have no control. Our sisters from Ukraine need food and shelter but, more than that, they need friendship and help in starting a new life. An Cosán will be working to support these women and their children.”

Ms Foster also said that isolation, abuse and lack of independence were an everyday occurrence for many women in Ireland and the world over. She described the pandemic as “hell” for women who were excluded from opportunities most took for granted. “Our society is not designed for women, and particularly women who face any form of disadvantage,” she said. “For example, we don’t honour the importance of the caring role, which is still predominantly played by women and usually on an unpaid or poorly paid basis. We don’t properly value the characteristics and insights that women bring every day to the working world.

“The pandemic has once again highlighted the strengths in how women lead, but all too often in our society women’s contribution is undervalued and marginalised. In An Cosán we value every woman and help her achieve her life’s potential.”

An Cosán offers a wide range of courses, including Access and Further Education classes in Tallaght and Higher Education programmes delivered blended or online.

Find out more at www.ancosan.ie, email courses@ancosan.ie, tel: 01 462 8488 or drop into An Cosán, Kiltalown Village Centre, Jobstown, during office hours.