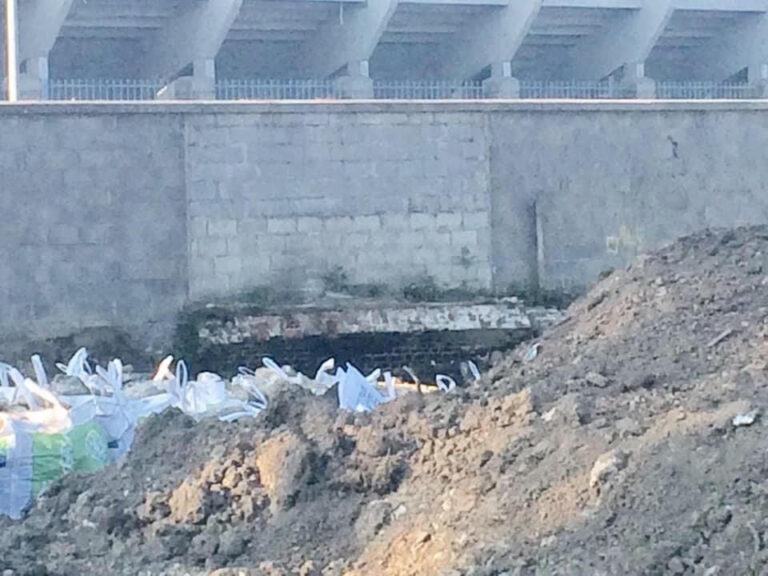 On the 1st of June, the Tallaght community watched in shock as a 200-year-old bridge was dismantled as part of a social housing project in Sean Walsh Park, on Whitestown Way in Tallaght. The 200-year-old bridge had been identified by the voluntary Tallaght Community Council (TCC) as part of the South Dublin County Council’s Part 8 public consultations in 2018. The bridge is believed to be one of the last remaining bridges from pre 1843 in Tallaght and possibly the wider County area. TCC had in fact commissioned and funded an independent report by a conservation expert, Dr Jason Bolton on the structure.

When the housing project was approved by the councillors of SDCC in 2018, commitments to preserve and retain the bridge in the final design were given by SDCC to allay the community fears that the bridge structure would be negatively impacted by the proposed development. The council also confirmed the structure was not on their list of protected registered structures list, despite sitting under their ownership on a park depot site for decades. In June 2020, Tallaght residents from Old Bawn brought this historic report on the bridge to the attention of Josepha Madigan, TD, then Minister of the Department of Culture, Heritage and Gaeltacht as not being on the protected structures list, asking for it to be given legal protected.

Dr Bolton’s report stated, “The bridge is in good condition and the masonry wall continues to function…The brickwork was given an aesthetic ‘pennystruck’ finish which is distinctive of many buildings in Dublin in the 19th century…The bridge and wall are not archaeological monuments or protected structures, but are sound historic structures which form some of the few physical reminders of the importance of milling in south Dublin in the past when the area acted as the ‘breadbasket’ of Dublin City….they both commemorate the past and add a historic element to a modern development, and in addition also aid in ‘placemaking’ and local distinctiveness.”

Since work started in 2021 on this housing project and heavy earth moving machinery was moved onsite, multiple community representations have been made to SDCC seeking reassurance of the preservation of the historic wall and bridge structure. SDCC never outlined a planned removal of the wall and bridge in any response. In fact, the bridge area was cordoned off in Mid-May as the site was cleared by the contractors. This gave a clear impression to all observers that the bridge was being protected and conserved in its historic location in this public park. It was therefore a complete shock to Tallaght residents, who have been monitoring the site daily, to see the bridge being removed with heavy machinery and packed in a dozen or more identical white half tonne bags. The community flooded local representatives, social media and the voluntary community council with emotional reports of the dismantlement of the revered structure. Two days on, the community are still in the dark as to why the bridge was removed from its historic location and taken offsite. There is no detail as to the removal, curation and reinstatement approach being taken by SDCC towards the historic structure.

“There was no ambiguity remaining about the community’s wishes in relation to this structure and why it was considered important. This bridge was a litmus test of South Dublin County Council’s commitment to heritage and history in South Dublin. How this is managed will reflect SDCCs regard for community consultation, working in partnership and best practice in the preservation of Tallaght’s built heritage. We eagerly await answers, as to how this 200-year-old structure could simply be knocked in one day and bagged.The necessity of public housing for older people is not in question. But we also need to honour the last fragments of Tallaght’s rich history and heritage to the highest standards.”

TCC have furnished a list of Questions to South Dublin County Council and are awaiting a comprehensive reply:

Communications
6. Did SDCC or Clúid update the public representatives or community groups on their plans for the historic bridge once a final design was approved?
7. Why were the community not advised before the historic structure was dismantled given the recent enquiries into the SDCC on the topic?

Management of a Valued Historic Structure
8. Who is overseeing the historic aspects of the work on this site on behalf of SDCC or Clúid?
9. What assurances and procedures have been outlined from Clúid in relation to how they are to
protect, conserve and reinstate the bridge?
10. What is the timeline as to the reinstatement of the bridge ?Will it be returned to its original position?
11. Since receive the independent report furnish by Tallaght Community Council in 2018, what steps if any, had been taken by SDCC to have the structure listed for protection and preservation as a known
historic structure?

Tallaght Community Council are acutely aware of the disappearance of the original stones of Virginia farmhouse over a decade ago and the destruction of the Tallaght wetlands beside The Weir in 2019. There is a long and troubled history of Tallaght’s heritage buildings being levelled, bagged and removed, often with some vague commitments around conservation and heritage. A strong lead is now needed by SDCC to clearly
show they do and will value Tallaght heritage, particular the heritage located on their land.

According to Mr. Perris, “If this modest but historic little bridge, held in public ownership on public land, can be removed by a developer acting on behalf of public Interest (SDCC and Clúid Housing), for the provision of public Housing, what hope is there for those larger buildings held on private property, such as The Priory in the years ahead? A line now needs to be drawn and a clear sense of value and leadership by SDCC, the community of Tallaght will no longer accept the destruction of what little is left of Tallaght history”.