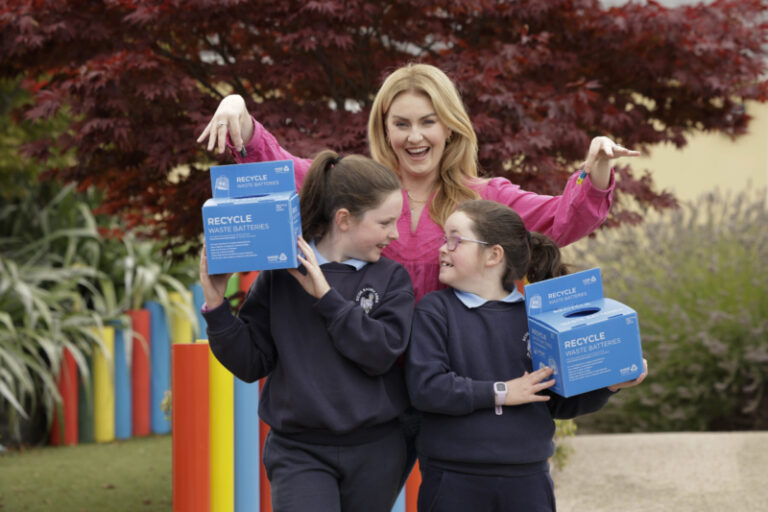 Dublin schools and students are being challenged to become battery recycling champions as part of a nationwide initiative which will also help children with life-limiting illnesses. The WEEE Ireland Schools Battery Recycling Competition returns this year, offering schools the chance to win one of six €2,000 sports equipment vouchers. Running from October 1 to March 31, it is open to all primary and secondary schools which collect at least 10 full 5kg battery boxes in WEEE Ireland Battery Recycling counties. Across all of Dublin,people recycled the equivalent of 15 AA batteries per person in 2021, equalling the national average.

TV host Mairead Ronan was on hand to urge schools to get plugged into the countrywide drive, which helps raise funds for children’s hospice LauraLynn. “This helps raise funds and awareness for LauraLynn and all the wonderful children and families who rely on their services and support,” said the Ireland’s Fittest Family host at the launch at the LauraLynn campus in Leopardstown, Dublin. “It’s heart-warming to see school children getting involved in projects like this and helping other children while doing so. Best of luck and well done to all the schools taking part across the country.”

The long running competition has a following of over 2,000 schools nationwide and encourages the involvement of teachers, families and wider communities to help students collect as many end-of-life batteries as possible. When the competition last ran, schools across the country collectively diverted from landfill the equivalent of almost 1 million AA batteries.

“Many still don’t realise that binning batteries leads to a loss of really valuable resources that are increasingly in short supply as well as causing harm to the environment,” said Leo Donovan, CEO of WEEE Ireland. “We are delighted to be able to return with this really important programme and expect a great response from students, teachers and the wider community, while encouraging some healthy competition.” “It is great to see this campaign back in schools. There’s something so special about children helping children and this campaign is all about that,” said Kerry McLaverty, CEO, LauraLynn.

“The funds that we have received through our partnership with WEEE Ireland over the last 11 years have had such a positive impact on the children and families who avail of LauraLynn’s care and specialised supports. “We recently reached the €500,000 mark, which is just incredible, and we are so grateful to WEEE for this partnership.”

Interested schools can visit weeeireland.ie for more information on the competition and to order WEEE Ireland Blue Battery boxes.