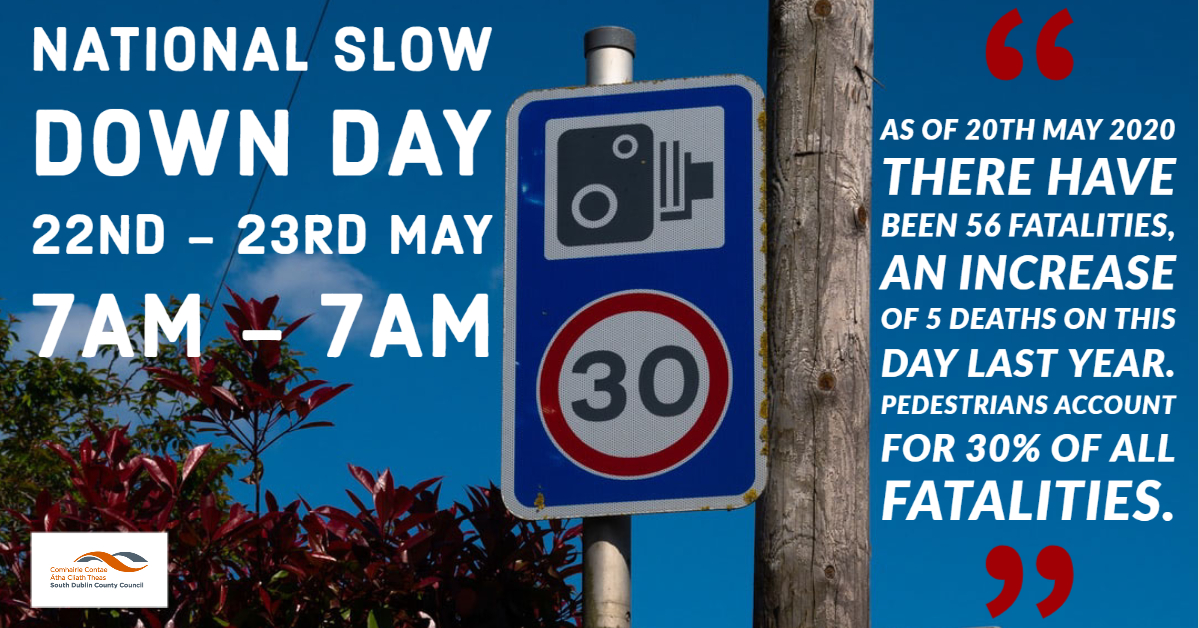 An Garda Síochána will conduct a national speed enforcement operation “Slow Down”, supported by the Road Safety Authority (RSA) and other stakeholders, for a 24 hour period from 07.00hrs on Friday 22 May to 07.00hrs on Saturday 23 May 2020.

The aim of “Slow Down day” is to remind drivers of the dangers of speeding, to increase compliance with speed limits and act as a deterrent to driving at excessive or inappropriate speed. The overall objective is to reduce the number of speed related collisions, save lives and reduce injuries on our roads.

In terms of road safety, 2019 saw 141 deaths recorded on our roads. We can never be complacent about road safety. Excessive and inappropriate speed is a major contributory factor in road traffic collisions, further confirmed by the RSA report on fatal collisions between 2008 and 2012 which found that excessive speed was a contributory factor in almost one third of all fatal collisions during that time. The higher the speed, the greater the likelihood is of a collision happening and the more severe the outcome of that collision. As a general rule a 1% reduction in average speed will bring about a 4% reduction in fatal collisions, and this is why reducing motorists’ speed is essential to improving road safety.

“National Slow Down day is about making our roads and our communities safer. During the current COVID-19 restrictions we have seen an increase in the number of vulnerable users on our roads. Excessive or inappropriate speed contributes to serious injuries and fatalities. Despite reduced volumes of traffic on our roads the levels of speed has increased. Whilst the vast majority of drivers drive safely within the speed limits, and it is most welcome, there still remain those who continue to drive at excessive speeds. We will maintain our focus on non-compliant drivers as they pose a risk to themselves and other road users”.

“Despite the reductions in traffic associated with COVID-19 we have continued to see a small percentage of motorists who travel at excessively high speeds both in urban and rural areas. In these times with more vulnerable persons on our roads, pedestrians and cyclists, we appeal to motorists to be aware of the posted speed limits and also while travelling to be conscious of the presence of other road users. We are appealing for all motorists to drive safely and please don’t be one of those detected speeding on Slow Down day”.

“Even though traffic volumes have reduced, the need for drivers to slow down has never been greater. Anyone out driving will probably encounter large numbers of people out walking, jogging and cycling within five kilometres of their homes. Vulnerable road users will probably need to social distance too when sharing the road. This means that drivers really need to be alert to their presence. Care also needs to be taken by pedestrians, to ensure their safety, by using a footpath. Where there is none, they need to walk as near as possible to the right-hand side of the road facing oncoming traffic. But regardless of who is at fault, the speed at which the collision occurs determines the severity of that crash. For example, if a pedestrian or cyclist is hit at 60km/h they only have a 10% chance of survival, but if hit at 30km/h they have a 90% chance of surviving. By slowing down a driver will have more time and space to react to any potential hazard on the road. It also increases the likelihood of surviving a crash.”

The operation will consist of high visibility speed enforcement in 1322 speed enforcement zones. We will also deliver the message through various media channels to remind people of the potential impact on families and communities of speeding.

Government Departments, Local Authorities, Public and private sector fleet operators are invited to participate in the initiative by circulating employees with the key message to “Slow Down” and, whether driving for business or private purposes, to always drive within the speed limit and at a speed appropriate to the prevailing conditions.

A relatively robust property market which does not appear

Weddings at the Ardboyne Hotel