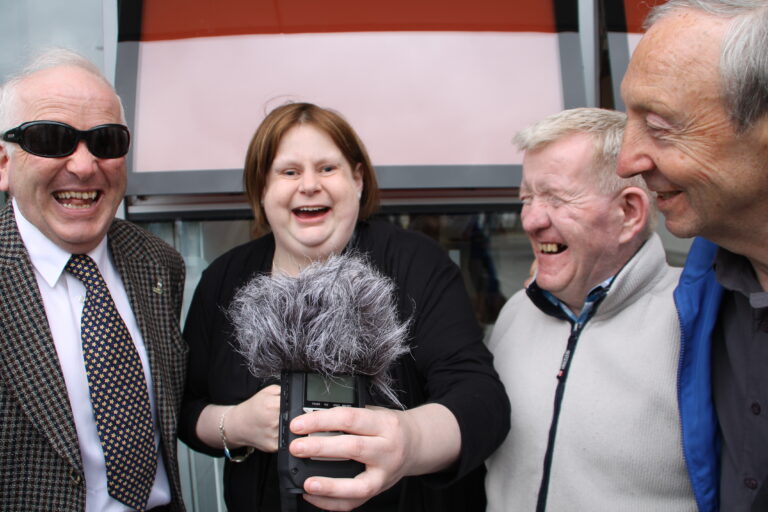 Sightless Cinema is delighted to welcome back a live audience on Culture Night, for their return to Tallaght with a premiere of their latest audio play Ballymuck Exchange –a telephone comedy at The Civic Theatre.

It’s a cold November night in the early nineteen seventies. Denis is settling in for a few whiskeys, and a quiet night operating one of the last manual telephone exchanges, in the close-knit village of Ballymuck -somewhere near Drogheda. ‘Blow-in’ Tony needs an ambulance for his wife Sinéad who’s gone into labour, but the axle is bust from the potholes, the GP is in a poker game, and the new Guard has everyone on edge. When an urgent call comes in from the Missions in Africa, Denis’ wires soon get crossed and the whole village gets caught up in the tangle.

Ballymuck Exchange is the latest audio play devised and recorded online by Sightless Cinema, Tallaght with director Ciarán Taylor. The group of blind and visually impaired people has been creating live audio events in cinemas since 2015, where blind and sighted can share unique listening experiences in the dark together, and all the pictures are in your head. They previously presented programmes at IMC Tallaght in 2018 and 2019, but were forced to move online in 2020 where they presented The Covid Tape-a comedy in 5 parts.

The group met weekly online for eight months to create, perform and record their latest play. It is the longest production yet, and presents some colourful characters, as we easdrop on the calls in and out of Ballymuck Telephone Exchange.

Sightless Cinema is in partnership with the National Council for the Blind in Ireland, and is funded by South Dublin CountyCouncil Arts Office,with recording facilities provided by Contact Studios at Rua Red Arts Centre, Tallaght.