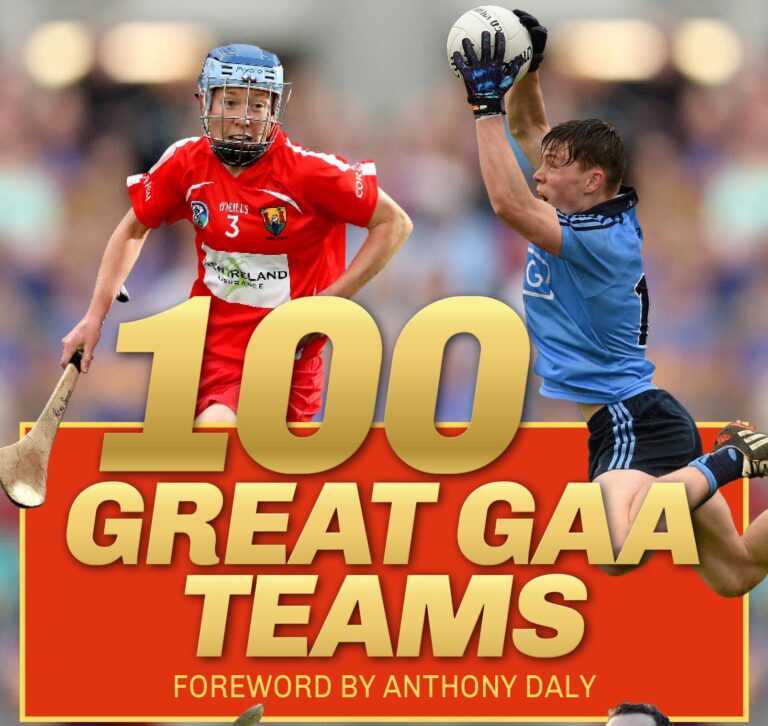 Scally writes of the 1970s team: My favourite film is Gladiator. The key scene is when Russell Crowe’s enslaved former general, Maximus, takes off his mask and reveals his identity to Joaquin Phoenix’s evil emperor in front of a coliseum full of raucous Romans. By accident rather than design I attended Dublin’s first match in the Leinster Championship in 1974. It was my first visit to Croke Park to see Roscommon lose the League final replay to Kerry. Most neutrals there would have laughed at the idea that this Dublin team would change the face of Gaelic football forever. Four months later they took off their mask and we gasped in wonder.

Over the last 10 years Dublin have become the superpower of football. However, this was not the first time in this role. By 1923 Dublin’s footballers had won their 14th All-Ireland but eventually they began to lag behind Kerry and never caught up – especially as they won only one All-Ireland in each of the ’40s, ’50s and ’60s. In 1973 their star forward from the 1958 All-Ireland winning team Kevin Heffernan was appointed team manager and he would not only transform the place of Gaelic football in the county but throughout the country. When he took the job though things looked bleak, ‘There were four fundamental points: the team had won nothing, it had done nothing, morale was at a low ebb and confidence just was not there.’

A first Leinster title in nine years began the road to glory. Then they staged a stirring comeback against Galway in the 1974 All-Ireland final. Galway led 1-4 to 0-5 at half-time but Liam Sammon, who had never missed a penalty for Galway, had his effort saved by Paddy Cullen in the second-half and Heffo’s heroes won by 0-14 to 1-6.

Then became arguably the GAA’s most famous rivalry when Kerry beat them 2-12 to 0-11 in the 1975 All-Ireland final. The Dubs did gain revenge in ’76, though, on a 3-8 to 0-10 score. In 1977 they clashed again, this time in the All-Ireland semi-final with Dublin emerging victorious, 3-12 to 1-13. The game has often been described as, ‘the greatest Gaelic football match ever’. The Jacks would go on to complete back-to-back All-Irelands by crushing Armagh, 5-12 to 3-06.

They played in six consecutive All-Ireland finals; losing to Kerry in ’78 and ’79. Their influence on Gaelic football cannot be understated. They brought unprecedented media attention and glamour to the game and encouraged a new generation of kids to play football. The late RTE commentator Mick Dunne is credited with their switch from white to navy shorts in 1974 because it would look better on television.

‘The Blue Panther’ Anton O’Toole revealed some of the secrets of the team to me: ‘Heffo turned us all into stars and the likes of Kevin Moran and Brian Mullins into super stars. He could spot a solution for every problem. He dragged Jimmy Keaveney from retirement. Without Jimmy and his brilliance over a dead ball we would have won nothing. Equally Heffo knew when a lad had passed his prime and needed to be retired. He had our games recorded. At that time video analysis was alien to the GAA though now it has become nearly overkilled. Heffo was always ahead of the curve, before anyone else knew there was a curve. Even as a player he had that innovation. He is credited with introducing the third man midfielder. This is not false modesty but we were a fairly average and often disinterested group of players when he came on the scene. He kept things lean and mean and had only two selectors. He raised our fitness to a whole new level though Mick O’Dwyer’s Kerry lads quickly matched us. Our rivalry with Kerry fuelled his ambition and he pushed us even harder because of it.

‘We were all very surprised when he walked away for a while when we were in our prime. In fairness to him Tony Hanahoe stepped up and did a brilliant job leading us. I guess that it is no secret that David Hickey was unhappy when Heffo came back. David was a brilliant forward but was not a man for hiding his feelings! He was like Heffo himself in that respect and as we have seen he has played a major role in Irish life through his career as a surgeon and his campaigning work about the situation in Cuba and is a man of strong opinions. No wonder Joe Brolly likes him!

‘Heffo loved Dublin but he had such a huge love for Saint Vincents. He was a great mentor to Pat Gilroy and the Saint Vincents connection was crucial in respect. In many ways Pat continued Kevin’s legacy.’ The definitive epithet for Heffo’s army came from the man best equipped to evaluate them Jim Gavin: ‘Nothing will ever match Kevin Heffernan’s team and what he did for Dublin GAA. His spark and genius, we just stand on their shoulders really.’

100 Great GAA Teams by John Scally is available in all good bookshops now.