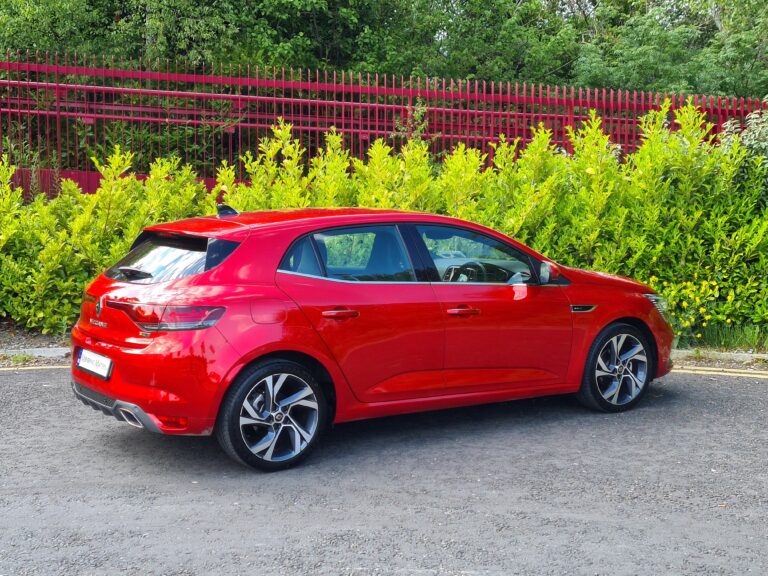 The original Renault Megane has been on sale in Ireland since 1995 and has proven itself to be a family-car favourite ever since. The current car is in its fourth generation, and it was launched in 2016 to replace its predecessor, which had a relatively long eight-year production run. The fourth-generation Renault Megane has now been facelifted to keep it fresh in the face of strong competition in the family car market, and with it comes new on-board technology and extra standard equipment, along with some modifications to the exterior styling. The current model is sold in hatchback, estate (Sport Tourer) and saloon (Grand Coupé) guises in order to cater for all forms of family life.

With its harmonious lines, chiselled features and refined finishing touches, the attractive and dynamic Renault Megane hatchback makes a bold statement, unveiling its even more sophisticated silhouette and its high-tech interior.

The revised Renault Megane is available in three trim levels – Play, Iconic and R.S. Line – all of which come with a six-speed manual transmission as standard.

Engine availability consists of a 1.3-litre petrol unit (TCe 140) and a 1.5-litre diesel (dCi 115), with a plug-in hybrid (PHEV) set to join the range later this year. As we have come to expect from Renault of late, an impressive array of standard equipment is available across all trim levels. At the front of the Megane is Renault’s trademark diamond logo, flanked by a pair of headlamps framed by distinctive C-shaped LED daytime running lights. When viewed from the side the car’s bulging wheel arches and a neat kick in the window line ahead of the C-pillar provide added visual drama, while eye-catching LED tail-lamps at the rear of the car run almost the entire width of the bootlid.

The high quality cabin of the revised Megane features soft-touch materials and easy to read dials – such as the rotary dials now used for the dual-zone climate control system. Apple CarPlay™ and Android Auto™ connectivity is now standard across the range, bringing the revised Megane up-to-date in terms of infotainment. The well shaped boot in the new Megane has a cargo capacity of 434-litres, but this can be extended to 1,237-litres by dropping the rear seat backs when the need arises. The fourth-generation of the Renault Megane has a strong safety record having been awarded a full five starts by Euro NCAP, and this revised model is no different. All trim levels get 6 airbags, parking sensors and cruise control with a speed limiter, while the standard Visio System in my R.S. Line review car includes lane departure warning, traffic sign recognition and automatic high/low beam for the full LED headlamps.

My test car was a Renault Megane R.S. Line dCi 115 finished in striking Flame Red metallic paint. The diesel engine in the Megane is a 1.5-litre, four-cylinder unit producing 113bhp and 260Nm of torque, enabling a 0-100km/h sprint time of 11.1-seconds, while claimed fuel consumption as low as 3.9l/100km on a combined driving cycle is genuinely impressive. When developing the revised Megane, Renault’s engineers focused primarily on comfort and refinement, and this becomes evident as soon as the car is driven. Not only does the Megane ride well, but noise levels are generally low too, allowing occupants to feel relaxed and comfortable from the outset. The Megane soaks up bumps and road imperfections with great ease, and the overall feeling is one of calmness and composure. The stylish exterior of the Megane R.S. Line attracts admirers with its sensual lines, F1 inspired blade in the front valance, a rear bumper enhanced with dual chrome exhaust pipes, and 17” custom alloy wheels (upgraded to 18” California diamond-cut on my review car). On the inside, carbon effect inlays, an R.S. double diamond leather steering wheel, aluminium sports pedals and the option of tactile Alcantara seats with built-in headrests add an element of sportiness and desirability. The family hatchback market in Ireland is fiercely competitive, with the Renault Megane hatchback facing talented rivals such as the Opel Astra, Ford Focus, VW Golf, SEAT Leon, Mazda3, Kia Ceed, Hyundai i30 and the Honda Civic – to name but a few. With this in mind, Renault has provided the revised Megane with the necessary ingredients to fight their rivals head-on and it is now a serious contender for class honours.

The revised Renault Megane hatchback is priced from just €24,740 (ex-delivery), with the highly-specified R.S.Line priced from €29,140 (ex-delivery). All new Renault passenger cars are covered by a warranty package for up to 5 years from date of first registration with unlimited mileage during the first 24 months, then limited to a total of 200,00 km or 5 years, whichever comes first. There has never been a better time than now to buy a new Renault of your choice, with amazing cash-back offers and finance deals available (terms & conditions apply).