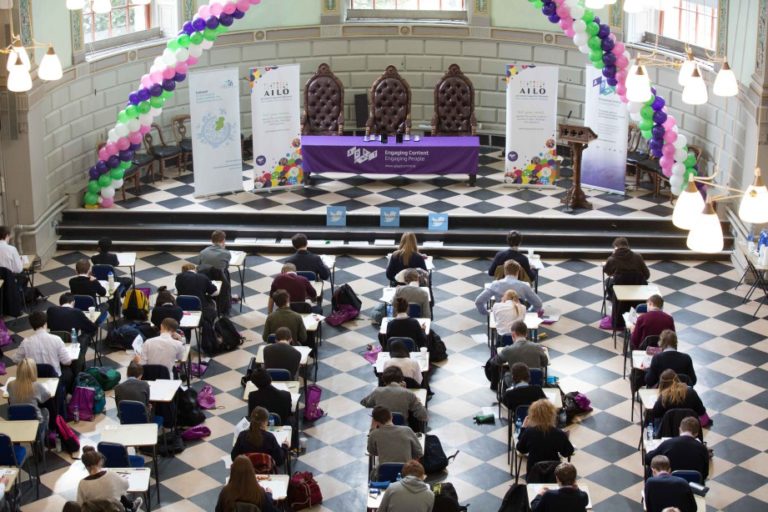 Two Dublin teens, Pádraig Sheehy from Gonzaga College, Dublin and Cian O’Hara from Holy Family Community School, Rathcoole are amongst the 8-member team that comprises Team Ireland that competed in the International Linguistic Olympiad 2017 in Dublin. Sheehy and O’Hara join more than 176 students aged between 14-19 years from 29 countries to compete in the International Linguistics Olympiad 2017. The event was hosted by the Science Foundation Ireland-funded ADAPT Centre for Digital Content Technology. Competitors attempted over the 5 days to win a gold medal for their country and/or an individual medal for their problem solving skills.

The IOL is an annual international competition that challenges young people to decode unfamiliar languages, many of them little-known or expired languages.  It encourages students to develop their own strategies for solving problems in fascinating languages from around the globe. Students must use their ingenuity to solve puzzles such as deciphering Egyptian hieroglyphics, decoding numerical spy codes, and interpreting ancient Mayan poetry. No prior knowledge of linguistics or a second language is required, as even the hardest problems require only logical ability and lateral thinking. The aim of the competition is to develop students’ problem-solving skills and to inspire them to consider the range of careers at the intersection of computing, linguistics and language.

Team Ireland comprises Ireland’s top eight second-level students who competed against over 4,000 students nationwide in the All Ireland Linguistics Olympiad (AILO) in order to qualify for the team. Team Ireland members are:

Cian O’Hara (17), Holy Family Community School, Rathcoole said ahead of the event: “I have really enjoyed doing problem solving in the All Ireland Linguistics Olympiad. I am really looking forward to participating in the International Linguistics Olympiad and making new friends as well as trying to solve all the different linguistic problems. This is my first time in the IOL but my second time in AILO. I decided to participate in the linguistics competition because I enjoy solving problems and learning about some languages along the way. I mainly hope to do well, as anyone would, and can’t wait to take part.”

Team members are selected on the basis of their strong performances in their national contests.  The competition is one of twelve International Science Olympiads.  IOL is designed to challenge secondary-school children, and has been growing since 2003.  Curious readers and aspiring students are encouraged to head over to the IOL official website, http://www.ioling.org/, to give some of the past problems a try.

The All Ireland Linguistics Olympiad and Ireland’s participation in and hosting of the International Linguistics Olympiad are key elements of the Problem-Solving Initiative. This two-year nationwide initiative, run by ADAPT and funded by Science Foundation Ireland, aims to foster a new generation of skilled problem solvers for Ireland and to prepare the future leaders in science, technology, engineering and mathematics (STEM) disciplines. The initiative will culminate in a free Family Problem Solving Festival in Trinity College Dublin on the 30th September.