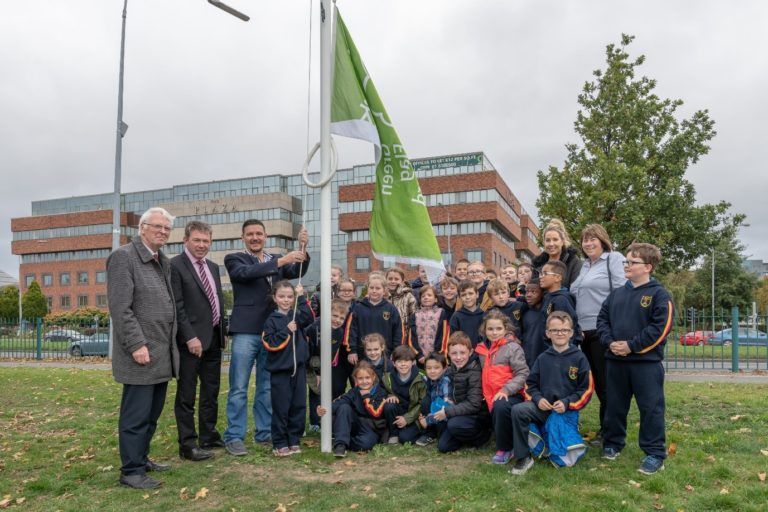 The Green Flag is awarded in recognition of achieving quality standards for the presentation of the Sean Walsh Park. The awards are marked on eight criteria, including horticulture standards, cleanliness, sustainability and community involvement. It promotes high horticultural and environmental standards and a benchmark for excellence in Park management based on acknowledged international best practice.

The park’s neighbours including local schools, residents, representatives from the Square, Tallaght Stadium, The Plaza Hotel, The Maldron Hotel, the Gardai, IT Tallaght, members of the Litter Mugs, local Councillors and staff of the Council attended the raising of the flag.

The Council welcomes the Green Flag award for Sean Walsh Park. This award acknowledges the work of the staff of the park and a very active group of volunteers – the Litter Mugs. The Litter Mugs, organise a monthly cleanup of the park, look out for the birds and wild life and take on other projects in the park. They make a real positive difference to the park.

October 4th marked Tree Day and as well as celebrating the raising of the Green Flag, and saw the launch of the Sean Walsh Tree trail. There are 15 trees in the tree trail with an information plaque at each point. A number of the trees are already growing in the park and others will be planted in conjunction with local schools over the planting season. The Tree trail is a project of Love Tallaght Outdoors, a local community group, and South Dublin County Council. The project was funded by the Local Agenda 21 Environmental Fund. IT Tallaght were also involved in producing the tree plaques.

Mayor Ward said “Parks are wonderful spaces where we can play sport, walk and enjoy nature. They enhance our lives and, in a busy place like Tallaght, offer an oasis of calm. I am delighted that South Dublin County Council’s Sean Walsh Park will fly the Green Flag, a recognised international standard. I want to congratulate the staff and the community groups involved in the parks for this wonderful achievement”