Raise Funds for Barretstown at the 2019 Womens Mini Marathon 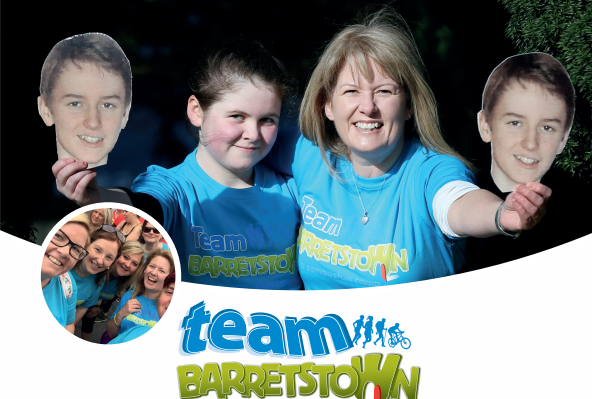 Are you taking part in this year’s Womens Mini Marathon? Why not raise funds for Barretstown? 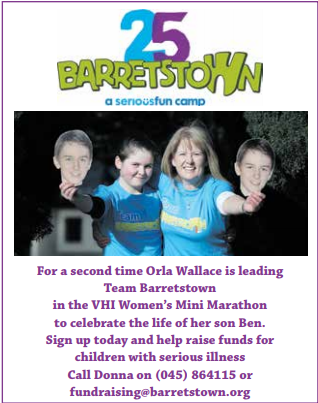 Become a part of Team Barretstown to get fit, have fun and raise money for a good cause

Barretstown is delighted to announce that Orla Wallace, a mum whose family’s lives were changed forever by Barretstown, will lead Team Barretstown in this year’s VHI Women’s Mini Marathon. The children’s charity today encouraged its supporters to join Orla and Team Barretstown to take part in the race in memory of her son Ben and to raise valuable funds to provide Therapeutic Recreation programmes for children with serious illnesses.

Orla lost her son Ben to Leukaemia in June 2015; she and her friends completed the VHI Women’s Mini Marathon last year in memory of Ben. This year Orla would like to encourage others to join Team Barretstown by walking, jogging or running in the marathon for a truly great cause.

Orla said, “Ben was 12 when he was diagnosed, just a month before he would start secondary school, and within 24 hours of his diagnosis his treatment had begun.  The treatment was really hard going, with high doses of chemotherapy and steroid drugs. It was a really intense time and Barretstown was like a beacon for us. As Ben said, ‘Barretstown just gives you this confidence. I don’t know how they do it, but that’s the magical thing about Barretstown.  It gives you a piece of yourself back – the piece you lose during your illness.’

“My son Ben and his sister Ava have spent many fantastic times at Barretstown, for which we are very grateful.  We feel a deep connection to this amazing place, and to all its children and families.  That’s why I am supporting Barretstown at the Vhi Women’s Mini Marathon and I hope you will too”

Speaking about Team Barretstown, Dee Ahearn, CEO at Barretstown, said: “The goal of Barretstown each year is to help more children with serious illnesses and their families, and each year the number of people joining our fundraising events continues to grow. I am constantly inspired by the strength of parents such as Orla and I would encourage anyone interested in achieving their fitness goals and raising money for a good cause, all while having some serious fun, to join Team Barretstown in participating in this year’s VHI Women’s Mini Marathon.”

Barretstown provides what it calls Therapeutic Recreation for children affected by serious illnesses – primarily cancers and serious blood diseases – and their families. Therapeutic Recreation is built upon elements from a number of disciplines including occupational therapy, psychology, recreational therapy, adventure-based counselling and education.

Barretstown has served over 50,000 campers since 1994. The charity’s services are provided to families entirely free of charge, making donations and fundraising efforts vital in helping more seriously ill children experience the magic of Barretstown each year.  We need to raise €5.8 million to run the programmes at Barretstown.

Childhood stops for seriously ill children, will you help us to Press Play on childhood?

The VHI Women’s Mini Marathon is the largest one day charity event in Ireland and the biggest event of its kind for women in the world! This year it will take place on Sunday 2nd June 2019.

To guarantee your place register today for the VHI Women’s Mini Marathon at: http://www.vhiwomensminimarathon.ie   and then contact Barretstown for your fundraising pack at: https://www.barretstown.org/events/vhi-womens-mini-marathon