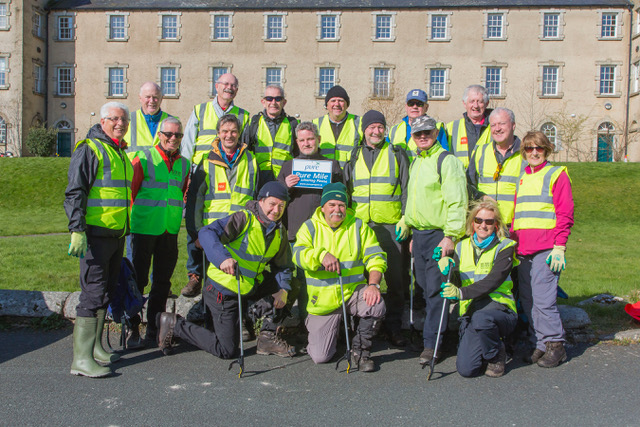 In 2019 the environmental project, Pure, recorded its lowest amount of illegal dumping collected from the Wicklow/Dublin Uplands.  Last year Pure removed 150 tonnes of illegal dumping from the beautiful, scenic, Wicklow/Dublin Mountains, when compared to yen years previous in 2009, they removed 344 tonnes, which is a 56% reduction.  A significant amount of the 150 tonnes of rubbish collected by Pure was gathered by the numerous volunteers involved in the Pure Mile.  Thousands of volunteers are involved in the Pure Mile Project and in 2019 they collectively improved and enhanced over 550 miles of roads, mountains, woodlands, valleys and upland amenities, with hundreds more enlisting in the 2020 Pure Mile Project.

This is the third consecutive year that Pure has seen a reduction in illegal dumping in the upland region and the lowest amount of dumping they’ve collected since the Pure Truck started on the road back in 2007.  Pure is the first project of its kind in Ireland and works with a number of statutory and non-statutory organisations and stakeholders, including, The Department of Communications, Climate Action and Environment, Wicklow County Council, Dun Laoghaire Rathdown County Council, South Dublin County Council, Coillte, National Parks & Wildlife Service, and the Wicklow Uplands Council.  This unique partnership project was established to combat illegal dumping in the Wicklow/Dublin Uplands and was officially launched in September 2006.

Ian Davis, Manager of Pure commented; ‘The Pure partnership approach, incorporating statutory and non-statutory organisations, and members of the public, has proven extremely successful in combating illegal dumping in the Wicklow/Dublin Uplands and over the past three years we have recorded an annual reduction in illegal dumping activity.  This reduction in dumping is a direct correlation with the increase of Pure Mile areas.  The Pure Mile makes a huge difference to the environment, especially in areas that are affected by littering and illegal dumping.  Pure Mile volunteers have totally transformed the upland regions and because of their dedication, determination, and enthusiasm, they have not only reduced illegal dumping, but in some areas, eliminated the problem.  A huge amount of progress has been made since Pure was establishment, however, there is absolutely no room for complacency, and it is vital that we continue to monitor the situation, or, we will see a return to the old days.’

The Pure Mile engages with all demographics in society, and in the past ten years, thousands of volunteers from community groups, walking groups, cycling groups, scouts, beavers, businesses and organisations, have removed hundreds of tonnes of illegally dumped waste and thousands of bags of litter and rubbish from the Wicklow/Dublin Uplands.  Pure provide all groups with Pure Mile signage, Pure Mile bags, gloves, litter pickers and Pure Mile high-vis vests, and they also remove all of the rubbish collected by the groups.  The success of this environmental community project clearly demonstrates that people do care about the environment, and, that people want to make a difference to improve and enhance the environment.   The role of the Pure Project is to facilitate groups, providing them with equipment, advice, and support, so they can make that difference.

The Pure Truck is on the road every day, and since the project was established, Pure has collected over 3,500 tonnes of rubbish from over 11,000 illegal dumping sites in the Wicklow/Dublin Uplands and have received 12,000 reports to the Pure office.  If you were to put all this rubbish into standard household rubbish bags, you would fill over 400,000 bags.   If you lined up each of the bags that Pure has removed from the landscape, they would stretch all the way from Dublin to Dingle.

Pure utilize a multi-disciplinary approach in combating illegal dumping, incorporating a number of preventative measures, covert CCTV operations, media/PR campaigns, public awareness campaigns, community projects, such as the Pure Mile, and educational initiatives, and due this approach the project has finally seen a marked reduction in illegal dumping in the Wicklow/Dublin Uplands. Another initiative attributed to the annual decline in illegal dumping activity is the success of the Pure Covert CCTV Operations, which involved the deployment and installation of a number of covert CCTV units at several problematic upland dumping sites which were continually affected by illegal dumping.  The footage obtained from this operation clearly identified the people involved in both littering, and illegal dumping.  This footage resulted in a number of people receiving litter fines, and one case brought before the courts involving large scale illegal dumping, resulted in a criminal prosecution and a large fine for the offending individual.  A number of illegal dumping incidents caught on covert CCTV are currently under investigation by Wicklow County Council, and South Dublin County Council, and Pure are confident that both of these local authorities will proceed with court prosecutions this year.

Ian Davis, Project Manager of Pure commented; ‘We will continue with our Covert CCTV Operations in 2020 and a number of locations that are continually affected by illegal dumping have already been selected for monitoring.  We are collaborating with, Wicklow County Council, South Dublin County Council, Coillte, and the National Parks and Wildlife Service, and we are determined to catch those involved in illegal dumping and further reduce this environmental scourge.’

PrevPreviousGo the green way this St.Patrick’s Holiday with SDCC’s Cyc-Lok bicycle parking and bike maintenance stations!
NextGrow, Cook, Eat is back on TV!Next