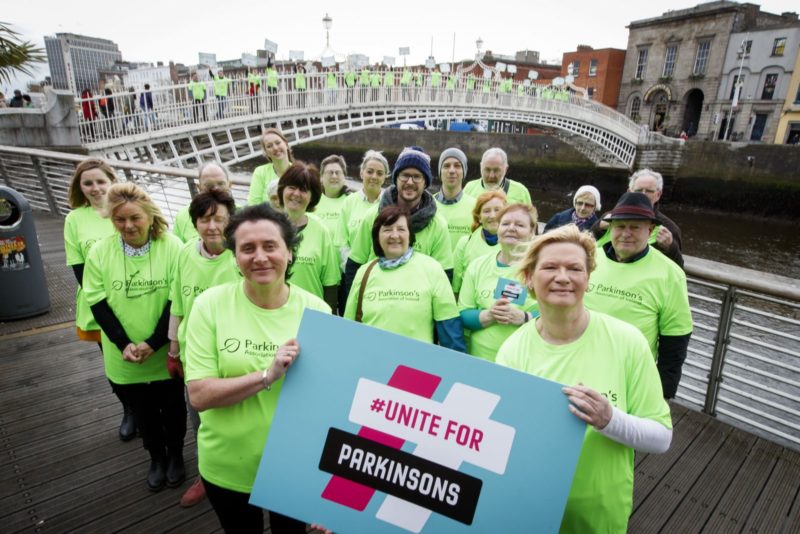 Parkinson’s Awareness Week, 9th-15th April 2018, will focus on what it’s like living with Parkinson’s for the twelve thousand people in Ireland who have this degenerative neurological illness. There is no cure. People with Parkinson’s range in age from their twenties to eighties. As the general population ages the incidence is predicted to rise significantly.

*Wednesday 11th April, World Parkinson’s Day: *the Parkinson’s Association of Ireland will join countries from across the world in posting thousands of videos and messages on social media describing what it’s like to live with Parkinson’s. Follow *#UniteforParkinsons* to see their stories as part of an international effort to raise awareness of the condition.

“Parkinson’s is recognised here as a Long-Term Illness but the services people get are not as good as in other countries. We’re working to change that,” says Paula Gilmore, Chief Executive of the Parkinson’s Association, “But to make that difference we need government funding.”

*Sunday 15th April, 12 noon*, *Merrion Square Dublin:* hundreds of people with Parkinson’s along with their families, carers and friends will converge for a *Unity Walk *around Merrion Square to show solidarity with those dealing with the difficulties of Parkinson’s and to highlight the shortage of Nurse Specialists around the country.

At Galway University Hospital, Patrick Browne, an Advanced Nurse Practitioner in Neurology, says, “Parkinson’s Specialist Nurses are a good model for chronic disease management. I get a lot of enquiries from public health nurses, GPs, and nursing homes.”

A common misconception is that Parkinson’s is just a tremor in the hand or foot but in fact symptoms can be as diverse as speech and swallowing difficulties, weight loss, fatigue, depression and issues with walking and balance. The symptoms are caused by a lack of dopamine in the brain. It’s the second most prevalent progressive neurological disorder after Alzheimer’s and is normally treated with medication.

Museum Are Welcoming You Back!

Call for government to provide masks to commuters