Official launch of Clondalkin as a ‘Líonra Gaeilge 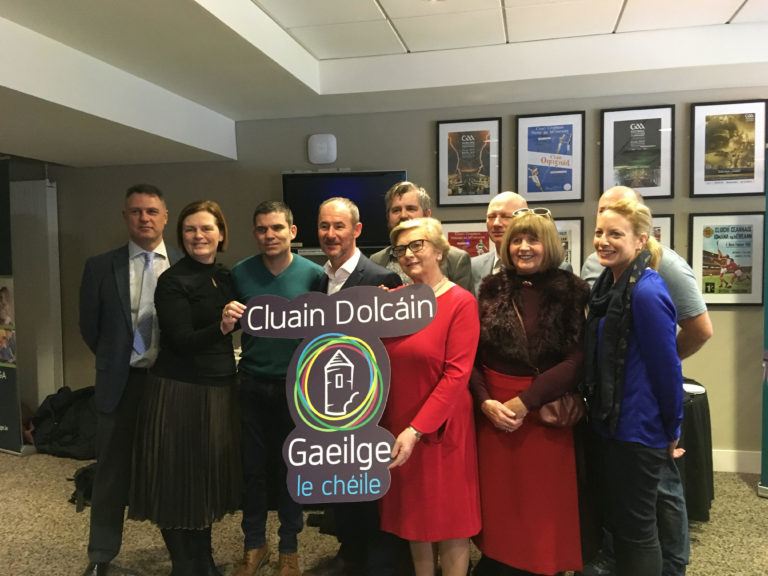 Speaking at the event attended by Minister for Gaeilge, Gaeltacht and the Islands, Deputy Fitzgerald commented “Clondalkin is making history this week as it is one of five towns to receive national recognition for the daily use of the Irish language in the community. This is the first time in history that the widespread use of Irish has been recognised in communities outside of the Gaeltacht.”

As part of the initiative, an Irish Language Plan is being put together and implemented locally by Brían Ó Gháibhín and Áras Chrónáin, in partnership with the Department of Culture, Heritage and the Gaeltacht and Foras na Gaeilge. The Plan will seek to further strengthen the language and support the increased usage of Irish in residents’ daily life over the next 5 to 7 years.

“Clondalkin has great pride in its culture and heritage. Áras Chrónáin has been preserving Irish culture for decades and working to make Irish more accessible amongst the local community. When my colleague and former Minister with responsibility for Irish, Dinny McGinley, began the ‘Líonra’ initiative, it was clear that this was Clondalkin’s chance to have its unique commitment to the Irish language recognised. I have been privileged to introduce subsequent Ministers to the Muintir Chrónáin in Clondalkin and support its application for Líonra status over the years.

“There is no doubt that this historic achievement could not have happened without the community in Áras Chrónáin, who have worked to preserving our Irish culture and make it more accessible for locals. Líonra status is a well-deserved recognition of the work of Brían Ó Gháibhín and voluntary members of Muintir Chrónáin over the years in creating a Dublin version of a Gaeltacht!” said Fitzgerald.

Fitzgerald is encouraging everyone to get involved in the Líonra initiative and to live its ‘Gaeilge le Chéile’ spirit saying:

“Census 2016 shows that almost 40% of our population can speak Irish, however only 1 in 4 of those actually put it to use. It also shows a population drop in the traditional Gaeltacht areas. In order to keep the language alive, supporting the development of the language and giving people opportunities to use what Irish they have is critical.

“The core aim of the Líonra is getting us all to use ‘Gaeilge le Chéile’- Irish together- in our everyday lives. Initiatives like free Irish classes in our local Library, Round Towers GAA, the classes and social outlet provided by Áras Chrónáin as well as our Gaelscoils and Naíonra give Clondalkin a significant advantage in spreading the use of Irish in everyday life.

“Outside of these outlets though, we can be embarrassed by what little Irish we have or feel unsure of how and where to use it. But if we want to secure the future of the Irish language, we need more people to get involved and use their ‘cúpla focail’. Áras Chrónáin are asking us all to use whatever level of Irish we have ‘gach lá, gach áith, le gach duine’ (every day, everywhere, with every one). So whether it’s a simple ‘go raibh maith agat’ in the local shops or ‘slán’ to visitors, we can all join in and contribute to Clondalkin’s Líonra status and the future of our national language,” concluded Fitzgerald.