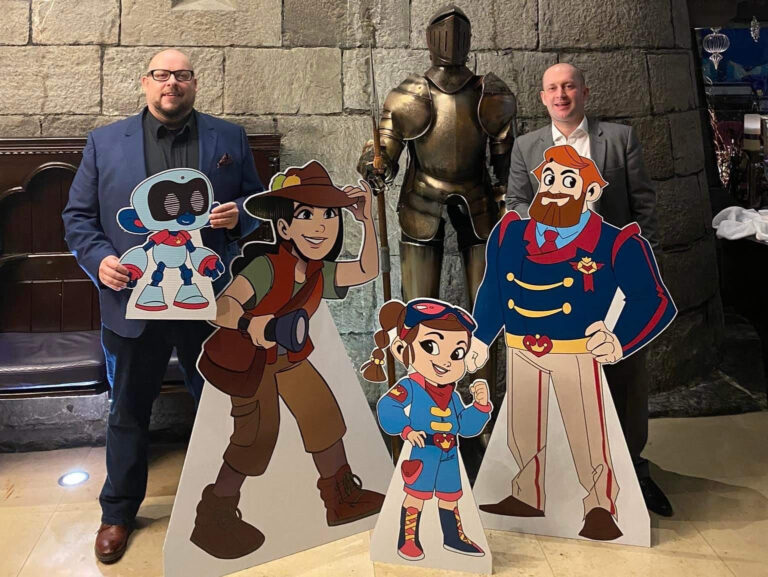 Despite the initial disappointment,Tallaght man Gavin Leonard said he was “proud” to win the Dublin Regional category at the 2021 InterTradeIreland Seedcorn Investor Readiness Competition, netting €20,000 for his project aimed at inspiring the younger generation. Gavin started Not Just a Princess in 2017 with his wife, Shannon, and has sold over 20,000 books worldwide in the last four years. He created the series to help introduce his young daughter, Jade, to different occupations, cultures, and opportunities – while having a lot of fun along the way. His win in the Dublin Region of the prestigious Seedcorn competition will allow Gavin and his team, which includes industry veteran Richard Keane, to begin to develop a 52-episode animated series that will see Not Just a Princess come to life on screen. The planned television series will focus on encouraging children, and girls in particular, to look at the STEAM [Science, Technology, Engineering, Arts & Maths] subjects in a different light.

Gavin said: “We still can’t believe that this incredible project, which started in our living room, has grown into such a huge force. We created Not Just a Princess to help empower young children, including my own daughter, but the whole project has done so much more than that. We have sold thousands of books, raised money for charities that are close to my heart and this €20,000 funding investment will allow us to begin the process of taking these amazing characters off the pages and onto the screen. We want to say a huge thanks to InterTradeIreland & all of the other regional winners and competitors.”

The funding investment of €20,000 will be used to chart the course the animated television series, and to create a full title sequence which will serve as the introduction for the show that Gavin and the team will take to a number of international pitching forums in 2022.

Gavin said: “You don’t often see families like us represented on-screen – a mixed family unit, half Asian, half Caucasian, so I am excited to bring that dynamic to the series. In Not Just a Princess we have the King who is a stay-at-home dad who encourages his daughter to try lots of things like practising Chinese and learning Kung Fu, there are also extended family members who live at the castle with the family. We hope to expand more on that in the animated series.”
Not Just a Princess Creative Director, Richard, added: “We were absolutely delighted to win the ‘Best New Start’ company at the Dublin regional finals and progress to the all-island finals, it has been a fantastic journey. The Seedcorn experience, along with the mentors and judges, has really helped cement our business plan, our route to market and, most importantly, it has helped to make us investor ready.”

It is set to be a very busy 2022 for the Not Just a Princess team as they pitch to international broadcasting companies in the USA, China, Europe, and the UK in an effort to bring their innovative project to TV screens around the world. For more information about the series visit www.notjustaprincess.com.