Newly released film, The Story of Plastic, is the Big Story the plastic industry doesn’t want you to see. It’s a must watch! 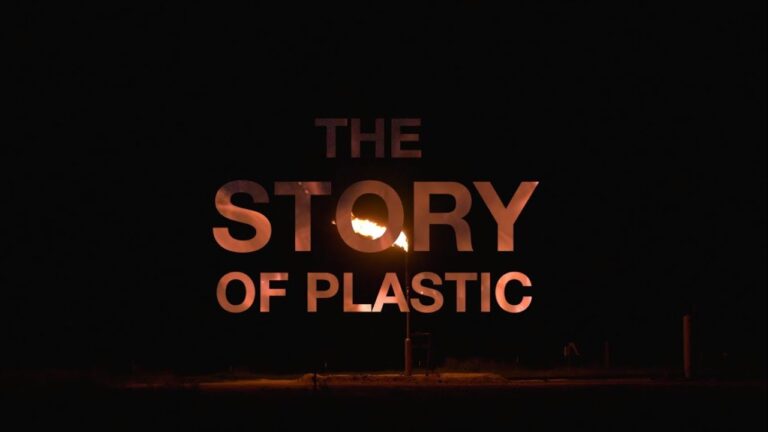 Environmental campaigning groups have been hosting online screenings across the world to bring the full story of plastic to mainstream audiences since the film premiered on the Discovery Channel on Earth Day this year. On May 12th and 13th the Sick of Plastic Campaign will be streaming the film for free online for the Irish public. And on May 14th the campaign will host a webinar to discuss the film and explore the links between plastic and fossil fuels within both the Global and Irish contexts.

The webinar will be moderated by sustainability activist and actor, Aoibheann McCann, and will be joined by; Meaghan Carmody – Head of Movement-Building at Friends of the Earth, Andy Gheorghiu – Fracking Policy Advisor at Food and Water Europe, Dr Niall O Leary – School of Microbiology at University College Cork, Sorcha Kavanagh – Coordinator of Conscious Cup Campaign and Dr Anna Watson – Head of Advocacy at CHEM Trust.

The Story of Plastic film takes a sweeping look at the man-made crisis of plastic pollution, from extraction of fossil fuels to plastic waste replacing fish in our Oceans. The film follows the journey of plastic while also examining the worldwide effect it has on both the health of our planet and the people who inhabit it.

Mindy O’Brien, Coordinator of VOICE Ireland says; “We are so excited to see this film bringing the full story of plastic to mainstream attention. Individuals, for the most part, only interact with plastic in the shops and when they try to figure out which bin to put it into. We focus on the impact plastic has when lost in the environment and appears as litter.  Most of us don’t equate plastic with oil or gas, but this is where plastic begins.”

Spanning three continents, The Story of Plastic illustrates the ongoing catastrophe: fields full of plastic waste, veritable mountains of rubbish clogging rivers and seas, and skies choked with the poisonous emissions from plastic production and processing. The disastrous consequences resulting from the flood of plastic that is smothering ecosystems and poisoning communities around the world, and the global movement that is rising up in response is revealed. Here in Ireland, where each of us generates 61 kg of plastic packaging waste per person, we are the largest producer of plastic packaging waste in Europe. Ireland also has a particular role to play in this global story as we continue the fight against fossil fuel infrastructure. Ireland made history in 2017 with a ban on fracking on-shore for gas, but our neighbours up north continue to battle.

More recent events that ties into the Story of Plastic narrative is the movement against Liquefied Natural Gas (LNG) Terminals. Two Liquified Natural Gas (LNG) Terminals are proposed for Ireland, in the Shannon Estuary, and Cork Harbour. Both have hit a bump recently as those negotiating the programme for government have stated no support for LNG terminals. If constructed they will bring fracked gas from the US into Ireland. Campaigners on both sides of the Atlantic have joined forces to fight it, pointing to the significant environmental and human health dangers from fracking.

On behalf of Americans Against Fracking, a coalition of hundreds of organizations in the United States, Mark Ruffalo, celebrity actor who is a long time anti fracking campaigner said; “Irish elected officials have taken a positive step toward protecting our shared global environment and climate by stating that Ireland does not need new fracked gas LNG import terminals and is considering instead to create jobs with renewable energy. “The proposed LNG terminals would import fracked gas from the U.S. to Ireland, the extraction of which causes widespread public health and environmental harm. Stopping the LNG terminals will be a relief for many Americans suffering the impacts of fracking as well as those of us working to ban fracking in the U.S. “The myth that fracked gas will offer energy security to any nation is now exposed for the fracking industry lie that it is. The financial market for fracked gas is collapsing before our eyes and politicians must turn their attention to bolstering the burgeoning renewable energy industry. Ireland can lead the world on clean energy with renewable energy and efficiency.”

Meaghan Carmody, Gas campaigner at Friends of the Earth says; “The story of plastic is about environmental and social justice. People somewhere will pay the price if gas is imported to Ireland via LNG. They’ll pay with their health, and we will collectively the pay the price in terms of the impacts on the climate. “We need to join the dots on plastic and put more emphasis on fossil fuel extraction as a way to turn off the tap on single use plastics.”

The Story of Plastic film powerfully illustrates the deep connection between the fossil fuel industry and the fight against single use plastics. One of the big secrets the film leaks is that the plastic industry is in fact owned and driven by fossil fuel companies. This poses the question whether or not we can really look at these issues as being separate.

Angela Kenny, campaign coordinator for Sick of Plastic says; “Our carefully curated webinar panel of speakers are sure to attract a strong audience, bringing this global issue closer to home for creating awareness and inviting action. “There are so many ways to take part in the movement away from single use plastic and fossil fuels; whether it’s choosing reusable options with the Conscious Cup Campaign, resisting excessive Supermarket plastic packaging with the Sick of Plastic Campaign or getting behind the fight against fossil fuels in Ireland with Friends of the Earth and front-line grassroots campaign groups across the west of Ireland. Together we can break free from plastic, and fossil fuels.”

To watch the film on May 12th & 13th and join the webinar on May 14th register at: bit.ly/storyofplasticire

For further information, and to also find the registration link: www.voiceireland.org / www.foe.ie