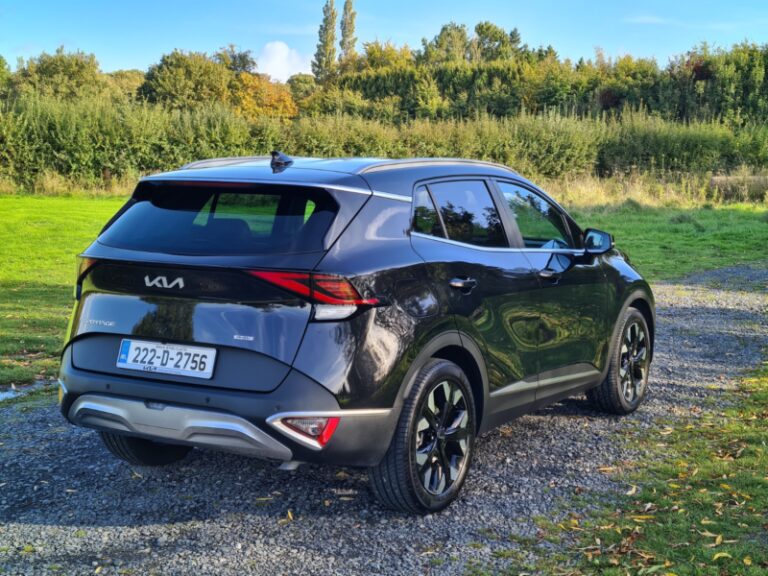 The new Kia Sportage is a mid-size five-seat SUV that is marked out by some distinctive and striking design details. The broad front grille and small, angular headlight units, along with boomerang-shaped daytime running lights, provide terrific visual drama when viewed head-on, while the rear tailgate design is reminiscent of the all-electric EV6. The distinctive rear lights emphasise the wide stance of the new Sportage, with the integrated rear spoiler adding a dose of sportiness to the mix.

The new Sportage PHEV (Plug-in Hybrid) features a powertrain that consists of a 1.6-litre turbocharged four-cylinder petrol engine, a 90bhp electric motor and a 13.8kWh battery pack that provides an all-electric combined driving range of up to 70km (up to 78km in city-only driving). This set-up has a total output of 265PS (261bhp) and 350Nm of torque, with a six-speed automatic transmission sending power to all four wheels. Kia’s award-winning T-GDI engine features Continuous Variable Valve Duration (CVVD), a sophisticated technology that controls the duration of valve lift to dramatically improve performance, fuel economy and emissions. The state-of-the-art battery pack features a high-tech battery management unit that constantly monitors the state of the battery, including factors such as current, voltage, isolation and fault diagnosis. The pack also has an advanced cell monitoring unit that measures and monitors cell voltage and temperature. Charging the Sportage PHEV can be done via a domestic socket in five and three-quarter hours (10-100%), but the same charge can be completed in just one and three-quarter hours via a 7.2kW wallbox charger or at a public charger.

The packaging for the Sportage PHEV has been carefully arranged to minimise impact on passenger and luggage space. The Lithium-ion polymer battery is placed centrally between the two axles under the body of the SUV, ensuring a balanced weight distribution, and an interior space that is practical, comfortable and versatile. The cabin in the new Sportage delivers an outstanding experience in comfort, quality, design and cutting-edge technology, thereby creating a driver-centric experience designed around the driver and passengers. Sitting at the centre of the sporty cockpit is a beautifully sculpted curved display, integrating a 12.3” driver instrument cluster and a 12.3” high-tech multimedia touchscreen plus multimode display. A touch-sensitive panel below the main screen switches between climate and infotainment controls, and this reduces the number of buttons on the dash without relegating everything to the screen. The spacious cabin in the new Sportage looks upmarket, it feels well built, and it is logically laid out too. Ingeniously, Kia has fitted USB-C sockets in the sides of the front seats and useful hook-shaped headrests boost the Sportage’s versatility further. Boot space measures in at an impressive 540-litres with the rear seatbacks in place, but by simply pulling two levers set into the side of the cargo area the space on offer increases to 1,715-litres. Safety is a strong point too, with the Sportage gaining a five-star Euro NCAP crash-test rating earlier this year. The rating applies across all the trim levels and powertrains that make up the Sportage range.

My test car was a new Sportage K3 1.6 PHEV which was finished in Black Pearl metallic paintwork (a €600 cost option) with Black Saturn cloth and faux leather seat upholstery. There are several driving modes to choose from including EV, Hybrid and Automatic, with the latter mode tasked with deciding how best to blend petrol and electric power sources itself. The Sportage PHEV also has Eco and Sport modes, along with mud/snow/sand modes for optimal assistance in offroad or slippery conditions. In all-electric mode the Sportage is quiet, while the petrol engine cuts in with the minimum of fuss, with no shunt from the transmission and not much in the way of noise from under the bonnet either. Fitting a plug-in hybrid drivetrain to the Sportage hasn’t affected its versatility in any way, and it is impossible to tell the difference between the PHEV and the standard car from within the cabin. The high-performance nature of the Sportage PHEV makes it a fun-to-drive SUV, with a 0-100km sprint possible in just 8.2-seconds, while fuel consumption as low as 1.1l/100km is possible if every journey is commenced with a fully charged battery. Steering response and cornering stability are improved with a new Kia ‘e-handling’ system that adds a form of torque vectoring to the PHEV.

The new Sportage is the fifth-generation of Kia’s global best-seller, and although the last model did very well for the brand, it seems that Kia have excelled themselves with this all-new model. This latest PHEV offers buyers of mid-size SUVs the opportunity of entering the world of petrol and electric power for the first time. The new Sportage K3 PHEV is priced at €46,000 (ex-delivery) with the K4 PHEV priced at €48,000 (ex-delivery). All Kia passenger cars come with a 7-year/150,000km warranty as standard.