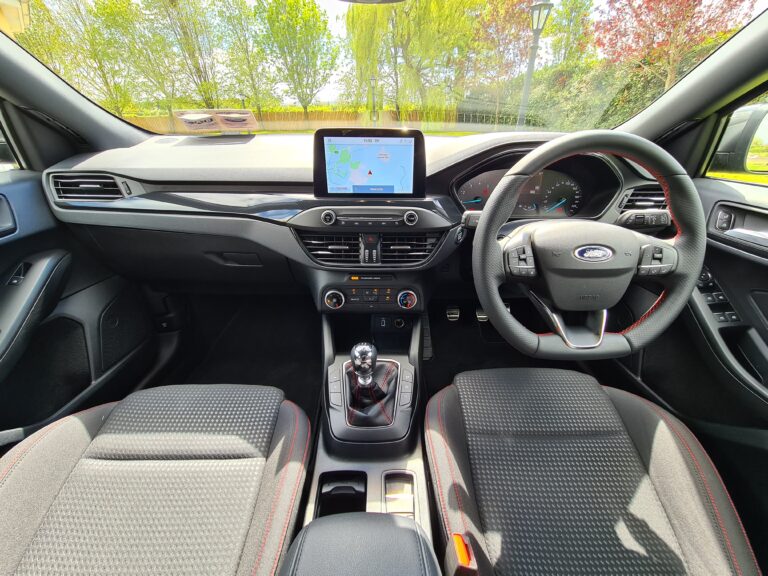 The first Ford Focus appeared on Irish roads in late 1998 as a replacement for the ageing Ford Escort. Now in its fourth generation, the Focus still remains one of Ireland’s best-selling cars. The current Ford Focus is based on a completely new platform, while a new design language and improved infotainment also feature. Originally available in petrol or diesel engine guises only, the enhanced Focus is now available with EcoBoost Hybrid technology for the first time.

The new EcoBoost 1.0-litre mild hybrid powertrain in the Focus features cutting-edge technology designed to keep pollution and running-costs down. Thanks to its 48V mild-hybrid system (mHEV) and cylinder deactivation, the new engine boasts increased fuel efficiency of up to 17% when compared to a standard, non-hybrid, 1.0-litre EcoBoost petrol engine. Cylinder deactivation enhances fuel efficiency by automatically switching off one of the cylinders when full capacity is not needed, such as when coasting or cruising with light demand on the engine. The system can disengage, or re-engage, one cylinder in 14 milli-seconds with no compromise in performance or refinement. Regenerative braking reclaims energy as you slow down, and uses it to deliver a boost as you accelerate, helping to improve performance. A belt-driven integrated starter/generator (BISG) enables recovery of energy usually lost during braking and coasting to charge a 48-volt lithium-ion air-cooled battery pack. Locating this battery beneath the front passenger seat has allowed the mild hybrid powertrain to be integrated with no loss of cargo or passenger space for Focus occupants.

With the exception of a discreet badge on the rear of the car, there are no visual changes to distinguish the mHEV Focus from its petrol or diesel counterparts. As with the entire Focus range, the mHEV is available in both five-door hatchback and estate body styles, with both also offered in crossover-style Active guise with a slightly raised ride height. The Focus is blessed with a distinctive and stylish exterior design language, which looks terrific from every angle, but Ford know that style is nothing without substance. With this in mind, the Focus rides on Ford’s latest ‘C2’ platform, which enhances the excellent driving dynamics and sporty characteristics that the Focus has become famous for. This new platform also enables the wheelbase to be 53mm longer than before, freeing up extra cabin space in the process. Rear knee room in the Focus has increased by 56mm over that offered by it’s predecessor and, thanks to re-profiling of the rear doors, rear seat passengers have more head room too.

The cabin of the new Ford Focus is pleasing on the eye, with a central band of polished trim on the dashboard, topped with a soft-touch section that spreads as far as the top of the door cards. The buttons for the climate control, and other functions, are all large and well labelled and, as so, are easy to identify. It is difficult to fault the cleaner, sharper ergonomics of the new Focus dashboard, as it benefits from a massive 50% reduction in button clutter, with as many functions as possible relocated to the prominent SYNC 3 infotainment screen. Boot space in the Focus is impressive, with 341-litres of cargo volume available with the rear seat backs in place, but this can be extended to a healthy 1,320-litres when the rear seat backs are folded flat.

The new Ford Focus is a beautifully made, well-equipped and comfortable family car that now adds mild-hybrid engine technology to the mix. Pricing for the new Focus starts at just €21,117 (ex-delivery), with my test car specification priced from €26,712 (ex-delivery). The new Ford Focus mHEV is on sale now at Ford dealerships nationwide.