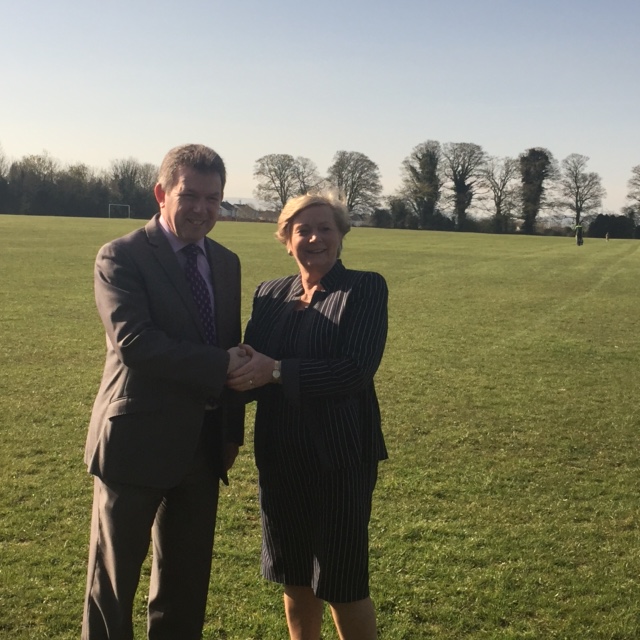 Frances Fitzgerald T.D., has this week confirmed that the Department of Sports has given the green-light to South Dublin County Council to tender for the long-awaited Lucan Swimming Pool.

“There has been demand for a swimming pool  in Lucan for decades, with newer residents in particular buying houses in Lucan on the understanding that one was scheduled for the area as per the Local Area Development Plans.“As a TD for the area, I have been a consistent supporter of the need for a local swimming pool  and supported the resident-led #Pool4Lucan campaign which has been keeping this topic on the agenda of local representatives and the Council,” said Fitzgerald.

Detailing her recent history in securing this project, Fitzgerald said:

“I met with the local #Pool4Lucan campaign in 2014, to discuss their petition and the concerns of local residents around this issue.

“Around this time, Ireland was coming out of the worst of the recession and Government was able to reinvest into services and community amenities. Within this context, I began to discuss the funding streams available for a number of local projects, amongst them a pool for Lucan.

“The main mechanism for publicly funded pools had been the national Swimming Pool Funding Programme but this was mainly servicing exiting public pools and was eventually closed in 2008.

“I made enquiries with my colleague, then Minister for Sports Michael Ring, about the possibility of re-opening the national Swimming Pool Funding Programme and raised the issue locally with the CEO of South Dublin County Council CEO, Danny McLoughlin.

“Following a number of meetings between Departmental officials and senior Council management, the Department agreed to reopen the Swimming Pool Funding Programme in late 2015. South Dublin County Council applied and was approved €3.8mil under the newly restored programme in April 2016.”

Since then, the Council have presented plans for a new, accessible Swimming Pool and Leisure Centre in Griffeen Park. They have also been completing technical stages of the project (called a Multi-Criteria Analysis) with the Department in order to move on to the building phase.

“I have been following up with my colleague, the current Minister for Sport Brendan Griffin, on this issue since I was re-elected in 2016 while Council officials were completing the technical phases of the development. Councillors have also progressed the matter at a local level, with my Fine Gael colleagues Cllrs Vicki Casserly and William Lavelle securing funding under the Council’s 2016 -18 Capital Plan.

“This week, Minister Griffin confirmed to me that his Department has fully signed-off on the project, allowing the Council to put the pool out for tender. My understanding is that the Council are eager to get moving and hope to have the tender process completed over the summer. Once a contractor is selected, building can finally begin!” confirmed Fitzgerald.

“Lucan was heavily developed during the Boom without the parallel development of local amenities. The young couples who bought during this period are now parents to teenagers who are looking for things to do outside of school. Nationally, the demand for swimming facilities is also on the rise with Sport Ireland’s data for 2017 showing an increase in swimming. This Pool and Leisure facility will provide a fantastic resource for all ages and abilities, and will be a great boost to the area. I look forward to building beginning in the near future and seeing this project finally become a reality,” concluded Fitzgerald.