My Lovely Horse Rescue Update on the Current Treatment of Horses 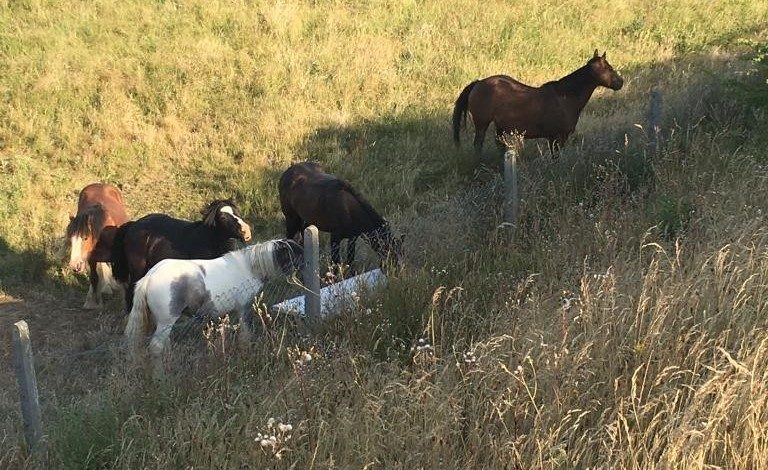 Please note the content below may be found distressing by readers.

A week in the life of the volunteer-run organisation My Lovely Horse Rescue sheds light on how horses are treated in Ireland– and it’s not pretty.

The current spell of hot weather has boosted the mood of many people around the country. After a day in the office, some of us look forward to heading out to the coast or even into the back garden to soak up the sun. For the volunteers with My Lovely Horse Rescue (MLHR), however, these balmy evenings are spent fielding calls about abused horses in the greater Dublin area and beyond.

In the past week alone the volunteers rescued one young pony from the Bluebell area of Dublin; spent more than six hours at the side of a mare with spinal damage who was found collapsed – and paralysed – in Rathfarnham; and have spent hours carrying, by hand, hundreds of litres of water to horses left to fend for themselves in fields without food or water.

Harvey is the name given to a young pony (between 1 1/2 and 2 years old) who was seized by the Garda with assistance from  MLHR from the side from the Grand Canal in Inchicore Bluebell on 28th June.  Harvey’s rescue follows on from an initial call to MLHR from a member of the public late in May, who saw a young pony on along the banks of the Grand Canal at Bluebell with serious wounds on each of his legs and on his head and wearing a rug in very warm weather. As the authority responsible for enforcing the Animal Health and Welfare Act 2013, the Department of Agriculture, Food and the Marine (DAFM) was contacted and an inspector sent out the next day to review Harvey’s condition. The pony was not seized on this occasion, however.

A week later, Harvey was seen again on the side of the Grand Canal, this time by an MLHR volunteer who observed he was still in poor health and his condition had not improved. The pony still had open wounds on his legs and there was no sign of wounds being treated.  Gardaí at Kilmainham were notified that evening and Gardaí contacted the DCC horse pound contractor.   However, Harvey was observed again by members of the public towards the end of June being ridden roughly by a group of teenage boys.  On 28th June, an MLHR volunteer observed Harvey along the side of the road near the canal, contacted Gardaí who authorised his seizure and for him to be transferred into the care of MLHR.

Harvey – as he is now called – was diagnosed by the MLHR vet with ragwort poisoning, a condition the results in extreme sensitivity to light. The condition affects non-pigmented areas of skin and produced the open wounds seen on all four of the pony’s legs (see image above). According to the vet who treated Harvey at the MLHR farm, the condition also results in excruciating pain. Harvey is now on painkillers for the pain associated with the ragwort poisoning. Harvey’s spine also showing signs of damage caused by being ridden roughly and while too young (note: horses and ponies should not be ridden before the age of 4).

In the same week that Harvey was seized by Gardaí with MLHR at Bluebell, another young pony was rescued from the same area of the Grand Canal by Dublin City Council’s horse pound contractor. Witnesses reported seeing a very sick animal, with open wounds and blood and pus pouring from its neck, being ridden along the canal by teenage boys, often two at a time. Boys were also seen throwing stones at the animal, who was reported as being very weak to the extent that it was having difficulty remaining standing. The pony is suspected to have been suffering from strangles, an infectious disease that produces symptoms akin to flu or ‘strep throat’ in humans.

And again in the same week, around 10.30 PM, an MLHR volunteer happened across a collapsed mare near Stocking Lane in Rathfarnham, Dublin.  MLHR contacted Gardaí and a vet and volunteers stayed with the mare for more than six hours until a vet arrived to examine her. The mare was diagnosed with spinal damage, associated with being ridden badly, and her hind quarters were paralysed. She was euthanised on the spot.

BUSINESS AS USUAL, AND THEN THE HEAT

This is just a small selection of animal abuse calls that MLHR deals with on a weekly basis.

In addition to this, many MLHR volunteers have, on a daily basis, been bringing water to horses left to fend for themselves on public lands without food, water, or shelter from the sun.

Volunteers often walk several hundred metres across public land carrying five-litre water bottles, and buckets for the horses to drink from. Horses are frequently moved around by their owners or wander across large open areas, and MLHR volunteers often have to scout the area every day to find the horses.

Volunteers are often required to be creative when it comes to watering and feeding horses. In one location, for instance, volunteers placed an old bath in a field and filled it with 160 litres of water for the five horses located in that area. Volunteers refill the bath every evening.

After an appeal for help by MLHR, members of the public have also started bringing water to horses in similar situations throughout the country.

What to do if you see a horse in distress:

Take a photo, make a video, record the time and location of the incident. Call the Department of Agriculture animal welfare hotline: Call Save: 0761 064408 / Phone: 01 6072379 / animalwelfare@agriculture.gov.ie  and leave a voicemail if the call is not answered.

My Lovely Horse Rescue is a run not-for-profit voluntary organisation.  MLHR regularly assist the Garda and Department of Agriculture in moving equines and donkeys to a place of safety.  MLHR rehabilitate and re-home rescued and surrendered animals or horses transferred from Local Authority horse pounds.