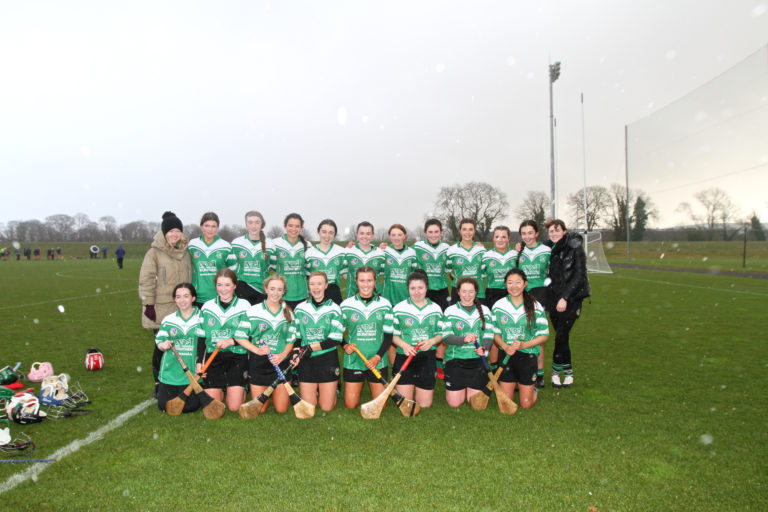 FIRST HALF
This was a tale of two halves, two teams and two weather systems! The morning began fresh and damp, tyres sending up a light spray on the drive to the match in Abbotstown. Conditions were oscillating between incessant downpour or glaring sun teasing both teams as they prepared to take to the field. Which team would providence shine on and which would be rained upon was in the balance. two impressive teams assembled for the starting whistle and the game began with good pressure exerted by Lucan. This resulted in a free for Aoife Mahon who send the sliotar soaring for the first point. The rains descended in a heavy gale that challenged all players. This was to endure for the entire first half. The players descended in packs to midfield where a fierce battle ensued back and forth. Resolute play was required and the Lucan players dug in as did Crokes.

Kilmacud racketed up the pressure sending a number of strikes towards the Lucan goal which were rebuffed or put under such intense scrutiny and were forced wide. The winds gathered in strength and the temperature was close to freezing, the rain unforgiven. The players battled on. Lucan again were rewarded with a free and again, metronome like, Aoife Mahon struck the sliotar between the posts. A battling Faye Murphy quickly added another point from play. Crokes responded with a point of their own. They absorbed the Lucan waves of Millie Reid, Ellen Dunphy, Laura Quinn pounding incessantly at their defence and added another point. Three points to two, nothing in it.

Phoebe Shannon took a ball out of the air from an Ellen Dunphy strike and mayhem ensued resulting in a wide. Crokes struck back in armageddon-like weather and scored a goal finely struck from the ground. Crokes then sent a high ball in which crept into the Lucan goal during the resultant melee. Aoife Mahon rebounded by scoring a point from play. It is difficult to describe the conditions, the very words of this scribe weeping down the soggy page as he struggled to ward off wind and rain. The players bravely battled on with Crokes scoring another point from a free.
The half ended in in these embattled conditions.
Lucan Sarsfields 0:4 Kilmacud Crokes 2:03

SECOND HALF
After a change of jerseys, Lucan took to the field in what can only be described as a miraculous change in weather conditions. The sun peeked out and decided to stay and watch the game with relieved players and spectators. Lucan upped the ante early on and went for goal which was pressed wide. Chloe O’Connor pressed on and with the Lucan team at her back sent the sliotar into the back of the net. Chloe popped up in the next few minutes with a pass to Phoebe Shannon who popped the sliotar over the bar.

Lucan were head to head with Crokes now trailing by one point. The pressing game continued with a further two wides from Lucan. Laura Quinn took advantage with a well struck point and it was all evens between the teams. A surge of energy levels at the side of the pitch sensed the turn in the game. Crokes continued to bombard the Lucan end but the defence was stubborn and would not yield. This created opportunity for Lucan and Aoife Mahon sent two fine long-range frees over the bar and a point from a 45.

There followed a battle of the sideline down the left wing with Lucan winning three successive sidelines. Crokes, never down for long, established an attacking pattern which earned them a point from a free. But it was looking like Lucan’s day, they fought bravely and consistently to break out with the sliotar and again Chloe O’Connor struck with a goal.

Crokes sensing the end of the game in sight took a final breath and launched a series of sorties into the Lucan half winning three successive frees which they directed at goal. Again and again Alicia and the defensive team broke down the attacks and distributed the sliotar upfield. The never say die attitude of Ellen was rewarded with a fine point from play after a surging run upfield. The final whistle saw a triumphant Lucan absorb the win with spectators taking to the field. Kilmacud Crokes, old and worthy adversaries, are to be congratulated for the spirit and endurance shown today. Likewise the Lucan team, in the words of Ollie Mahon – ‘a mighty performance.

All the girls deserve praise. Tough, talented and winners of the Dublin Minor A Orla Quill Camogie Championship. Congratulations Laura Quinn on Player of the Match. Well done to the strong coaching team who have worked wonders with the team. To end in the words of a great bard in reverse – It was the worse of times, it was the best of times…