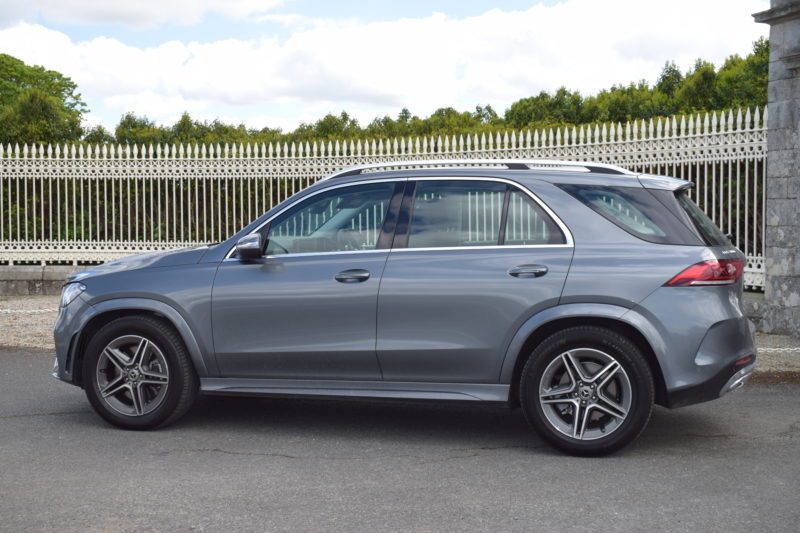 The new Mercedes-Benz GLE is the fourth generation of the premium German manufacturer’s large SUV, having started life badged as an ‘ML’ back in 1997. The ML was an instant sales success for Mercedes-Benz worldwide, so much so, that it went on to become the best-selling SUV in the history of the company. The ML spanned two generations, but with the third generation model in 2015 came a name change to reflect a massive uplift in technology, refinement, performance and desirability. The path being followed by Mercedes-Benz, by injecting replacement models with a new sense of youthfulness, is most evident in the latest GLE, which has just launched in Ireland.

The new GLE is entering a vastly different market than the first-generation ML did in 1997, with multiple large-SUV offerings from rival manufacturer’s available now in many different sizes and configurations. With seven seats available for the first time (a reasonably-priced cost option), the GLE’s main competitors are the BMW X5, Audi Q7 & Q8, and the Range Rover Sport. The luxury SUV market now makes up a sizeable share of the total new car market across the world, so the new GLE is a significantly important car for Mercedes-Benz. In fact, since 1997, combined ML and GLE sales have topped the 2-million mark worldwide.

Three diesel models make up the new GLE range all with 4MATIC transmission (9-Speed G-Tronic Automatic, with 4WD) as standard – a GLE 300d, GLE 350d, and GLE 400d.  The GLE 300d is powered by a 1,950cc 4-cylinder engine, while the other modesl in the range are fitted with a 3.0-litre, 6-cylinder power plant. A 3.0-litre, 6-cylinder turbocharged petrol engine (producing 367bhp) is also available, and is badged as a GLE 450. For drivers looking for even more power, high-performance AMG53 and AMG63 models are due to join the new GLE line-up in the near future. Also promised later is a plug-in Hybrid electric version with, a rival-beating, full electric capability of up to 100km’s. Ranked the first SUV in its class to meet Euro 6d emissions standards (not coming into force until January 2020), it is fitted with an extended exhaust gas after-treatment system and additional under-body SCR catalytic converter technology that reduce nitrogen oxide emissions down to 20milligrams per kilometre on average.

My test car was a new Mercedes-Benz GLE 300d 4MATIC finished in stylish Selenite Grey metallic paint with black Nappa leather interior. Producing 245bhp, and a truly impressive 500Nm of torque, the smooth and responsive turbo-diesel engine in the 300d is capable of sprinting from 0-100km/h in just 7.2-seconds, on its way to a top speed of 224km/h (where permitted). Accompanying these remarkable performance figures, are equally remarkable fuel efficiency figures, with as little as 6.1-litres of diesel consumed for every 100km’s driven on a combined driving cycle. Courtesy of an optional AMG Line pack, my test car was adorned with an AMG front apron, striking sporty air intakes in the wing liners, flared wheel arches, side skirts, rear apron with diffuser-look insert in black and trim strip in chrome, sports pedals in brushed stainless steel with black rubber studs, along with striking 20” AMG twin-spoke light-alloy wheels for outstanding visual impact. Quiet and smooth-running in terms of its driving and handling characteristics – with the latest-generation of suspension and comfort control features –  the new GLE is even more responsive, delivering greater enjoyment and driving comfort in normal road conditions and an even more competent off-road performance. The new GLE possesses outstanding driving dynamics, irrespective of the quality of the road surface, while precise steering direction – with terrific feedback – along with strong braking performance, ensures ultimate driver enjoyment on every journey. As we have come to expect from the Mercedes-Benz brand, standard specification in the new GLE is hugely impressive in terms of safety, security, convenience, comfort, and cutting-edge technology. 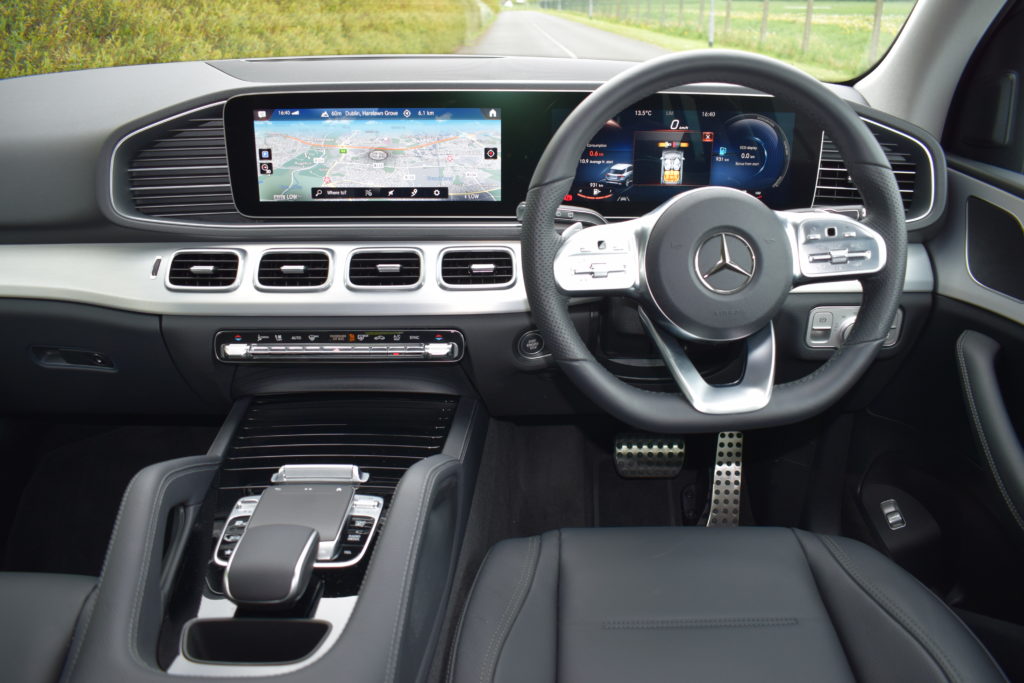 Though fitted with the power needed to handle the rough and tumble (with a towing capacity of 3500kg), the GLE now has a noticeably more-rounded, more-elegant presence, with Mercedes-Benz’ designers having toned down its predecessor’s bold muscular lines.  With its younger-looking, ready-to-rock appearance – with 80mm longer wheelbase, short overhangs and flush-fitted wheels – the overall objective was to ensure that the new GLE will appeal to male and female owners in more equal numbers. Helping this will be its fuel-efficient, best-in-segment, 0.29 Cd value (down from 0.32). Achieving such a low coefficient of drag (Cd) figure is seriously impressive for such a large SUV, and is testament to the craftsmanship, and vision, of the cars exterior design team.

Equally impressive is the sumptuous interior of the new GLE, with digital displays, open-pore wood trim, and distinctive SUV design details displaying impressive inner greatness. As with every new Mercedes-Benz, high-tech features are to the fore. A standard feature is the acclaimed MBUX driver assistance and infotainment system with ‘Hey Mercedes’ voice-activation. In its latest form, MBUX has the day and night capacity to ‘read’ driver and front passenger hand and arm movements to facilitate the contactless operation of interior features such as seat adjustment, reading lamp and light functions.

Touch screen technology functions can be controlled intuitively, and displayed according to individual preference, on two large screens arranged to create a panoramic effect.

With a wheelbase which is almost 3-metres long, the new GLE is more spacious than ever, with room for up to seven occupants. This extra spaciousness is reflected in its longer, wider dimensions with increased front and rear headroom, better elbow and shoulder room, and better load capacity. For music lovers, there is the enjoyment of surround sound to be experienced. With the rear seats in my 5-seat test car in the upright position, boot space is a cavernous 630-litres, but this can be extended to a massive 2,225-litres with the rear seats folded flat. 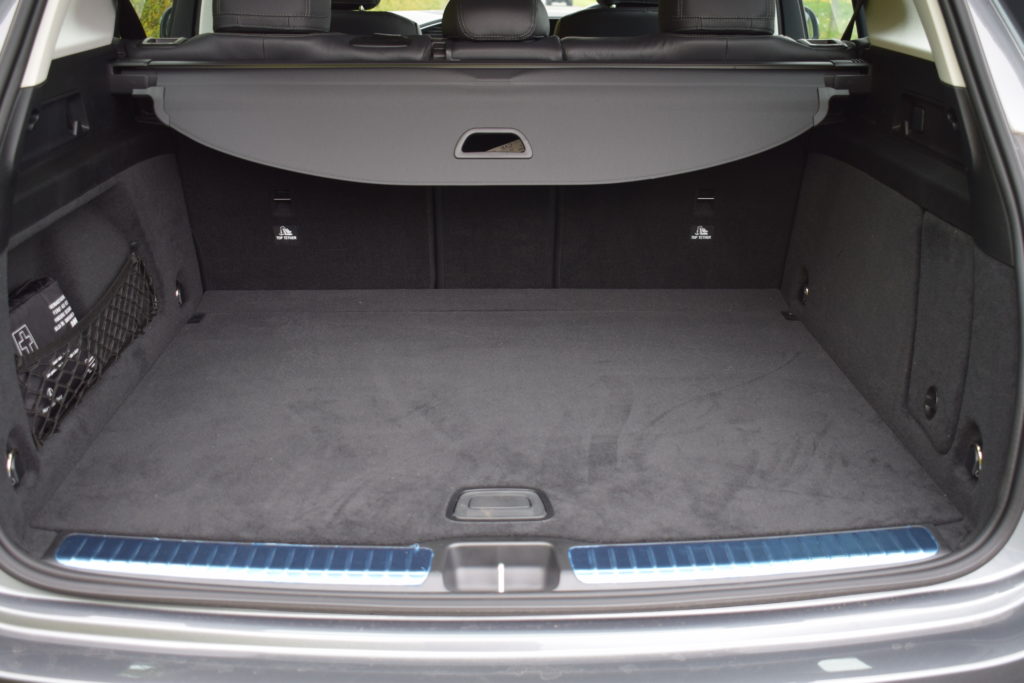