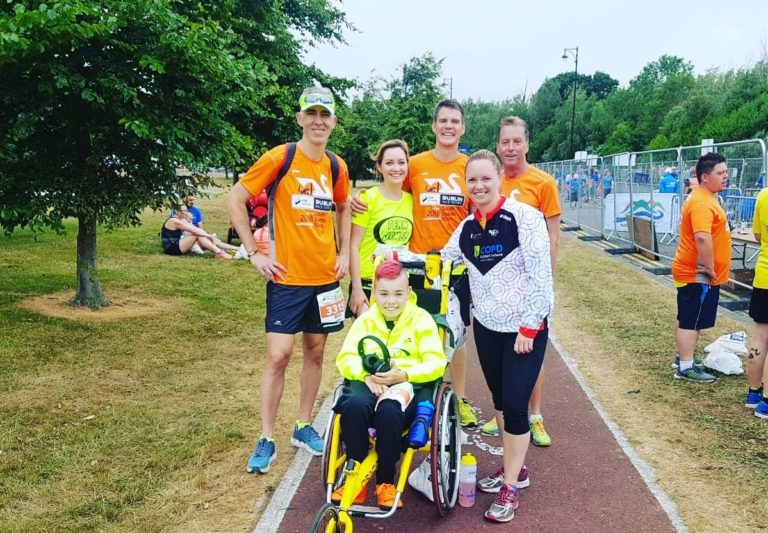 Newsgroup recently spoke with Vicki Casserly, Mum of James. James Casserly is a wonderful 12 year old who was diagnosed with Cerebral Palsy when he was two which affects his core and lower limbs mostly. This leads him to have difficulty with independent walking and balance.  When he was 6, he had a selective dorsal rhizotomy April 2012, a type of neurosurgery which eliminates the spasticity in his body which is a result of his Cerebral Palsy. James endured intensive physiotherapy as part of his recovery where he had to relearn to move and walk again.

More recently he was diagnosed with idiopathic polyarticular juvenile arthritis, affecting most of his joints as well as Osteoporosis.  As a result of this, he suffers from pain and lethargy most days.  However James has a very can do attitude and a massive smile.  He likes to put the ability into disability and show everyone he is just like any other twelve year old, but in Vicki’s eyes an exceptional one. After he was diagnosed with JIA, Crumlin Hospital referred him for a week of Fun in Barretstown.  In March 2015, the family went to Barretstown for a weekend of the famous #serious fun and James loved it. James was then invited down for a week of fun on his own in July as part of their summer camp.  Vicki added “This was James first time away from home without family.  He came home oozing of confidence, with a smile that could light a room, revived and excited. All sickness forgotten about. Barretstown instantly became extremely special to James”.

As part of the treatment for JIA, treatments involve chemotherapy and biologic treatments.  Unfortunately due to the nature of James condition, the medication was not fully effective.  Before Christmas James became a little down, as you would knowing things still were not under control.  At this point, Vicki met Mark, of insanity fitzone.  Vicki added “We explained to Mark, what was ongoing with James, introduced them and they instantly hit it off.  Mark kindly offered to help James get back on his feet.  Movement is so important for anyone suffering from JIA, although painful, in the long term, it will help.  Going to the gym gave James another burst of energy.”

As both James and Mark like a challenge, they came up with an idea of running a race, which escalated to the SSE Airtricity Dublin Marathon which is 26.2miles. When asked what charity James would like to do it for, without thought he declared Barretstown as it is so special to him and he would like lots of children to share in the smiles and fun of his time spent there. Vicki said “Not one to miss an opportunity, James set a goal of raising minimum of €10,000 for Barretstown, which to date, we have exceeded to in excess of € 85,000”.  With Marks help, James was set to become the youngest person to ever complete the Dublin marathon in a wheelchair. And he did. He has since completed his second Dublin Marathon with Mark. Team James has grown and evolved. Daddy, Dan Naughton, took up running and completed Limerick Marathon with James, Dan is currently competing in the race series and will this year complete Dublin City Marathon with his son. James is very excited to have the opportunity to do this alongside his Dad. 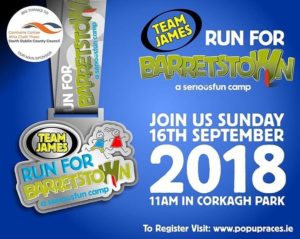 This September 16th, as part of South Dublin County Council’s Health and Well Being Week, sponsored by SDCC, Team James have taken on the task, and aspiration of James, to host their own 5km and 2km race ‘Team James Run for Barretstown’. The Inaugural Event is set to be held in Corkagh Park, Clondalkin, where they are setting out to have #seriousfun all in aid of Barretstown. James, along with help of family and friends are hoping for an epic event and inclusive event for all. You can register at: https://www.popupraces.ie/events/team-james-run-for-barretstown/