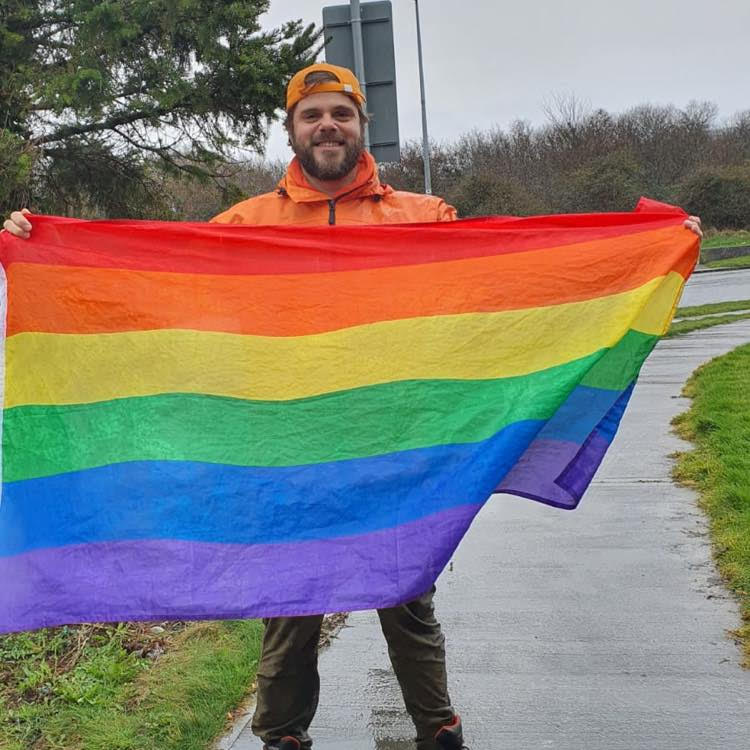 In a month when the EU Parliament declared Europe an LGBT+ Inclusion Zone, it’s time for us finally to celebrate South Dublin as an LGBT+ Inclusion Zone too. In 2015, parts of South Dublin returned the highest percentage Yes vote anywhere in Ireland in the Marriage Equality Referendum. Despite that, it’s taken til now for the county to have its own LGBT+ Network. Open to all LGBT+ adults living in or having ties with South Dublin County, the group has gone from strength to strength despite the lockdown.

Alan Edge, Independent councillor for Firhouse-Bohernabreena is one of 3 LGBT+ Councillors on South Dublin County Council, along with Cllr Emma Murphy and Cllr Francis Timmons, and was one of the founders of the Network, he added “There’s a huge demand. One of the reasons we started the group was because I looked around to see what supports and outlets there were and found very few. I did a survey in Dublin South-West and 75% of respondents were unaware of any services for LGBT+ people in the area. Speaking to people, I found a real need for a network for socialising, dating, advice and support and professional networking as well as activism”.

“One of the biggest challenges from starting in a pandemic has been not being able to meet face to face but despite that, there’s been huge engagement and enthusiasm online. At present we operate as a closed Facebook group to ensure a safe space for all LGBT+ people. So far we have over 200 members but we are growing very rapidly. As we’re not moderated, we’re open to adults only but we’d encourage any young people needing help, advice or support to contact BelongTo, the national LGBT+ youth organisation.”

While the motivation behind the group is a positive one based on bringing people together as a community, Alan acknowledges that the rise of the far-right and the prevalence of homophobia in our society are matters for concern. ‘Despite the huge strides forward we’ve made as a country, homophobia, transphobia and biphobia are still very real issues. In coming together like this in solidarity, we can face these challenges as a group and demonstrate that we are stronger together, countering hate with a message of love and a proud and beautiful expression of who we are’.

Recently the online network has expanded to cover the whole of South Dublin County following discussions with the Social Inclusion Team of South Dublin County Council and with the South Dublin Public Participation Network whose Co-ordinator, Kieran Walsh, brings a wealth of experience to the table, having had the honour to be the first ever (and to date the only) openly gay councillor elected in Limerick in 2003. Together, the various participants aim to drive this project forward and ensure greater representation countywide for members of the LGBT+ community.

In terms of the future, one of the most important functions of the group is to reach out to those within the LGBT+ community who may not be active on social media and those belonging to communities where LGBT+ people may face additional hurdles.

‘A big challenge for society as a whole in coming years will be the needs of an ageing LGBT+ population and the need to take that demographic into account and ensure their voice is heard when it comes to, for example, building a more inclusive healthcare service and providing housing for older people.’

‘We also hope to reach out to LGBT+ people within the Travelling community, as well as those who are asylum seekers and refugees, including people living in Direct Provision. By providing a much needed safe space for people from a wide range of diverse backgrounds, it’s hoped that the group can really make a profound positive impact on people’s lives.

The Network also hopes to work alongside groups such as Greenbow, who represent LGBT+ adults who are deaf or hard of hearing and it has a role in working towards greater inclusion locally for LGBT+ people with disabilities. Among the founders of the network is Brendan Searson, a seasoned LGBT+ community activist and member of Dublin Pride as well as a campaigner for persons with disabilities who added, ‘I look forward to us expanding the network in the coming months ahead’.

Above all, the Network aims to collaborate with Dublin Pride who have been incredibly supportive. CEO of Dublin Pride and proud Tallaght boy Jed Dowling says they share a vision of bringing Pride into South Dublin According to Alan Edge, ‘Together we’ll ensure that South Dublin celebrates the diversity of its citizens and becomes a welcoming and nurturing place for LGBT+ people of all ages and backgrounds.’

You can join the South Dublin LGBT+ Network on Facebook or email them at southdublinlgbtplus@gmail.com