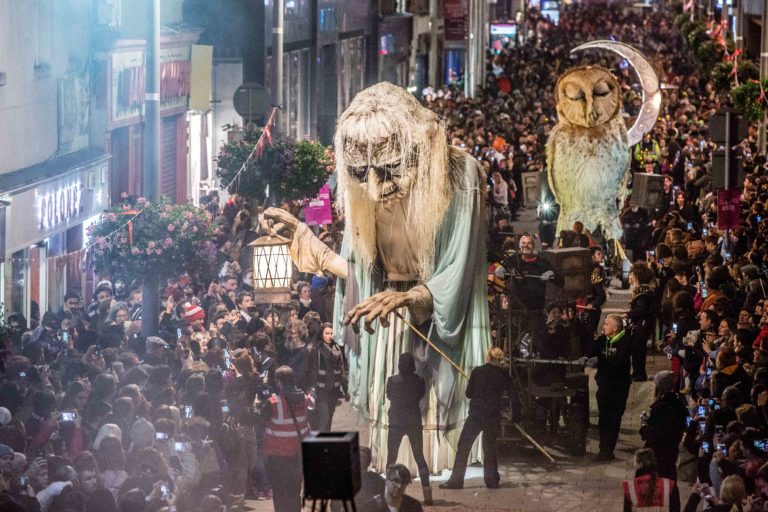 Dublin gets set to summon the supernatural this October Bank Holiday weekend as Bram Stoker Festival returns with four days of living stories and four nights of deadly adventures from October 27th to 30th. Bram Stoker Festival, a Dublin City Council and Fáilte Ireland initiative, today launches its full programme, with highlights including Al Porter’s Camp Dracula comedy show; the Macnas parade Memory Song through the Northside of the city; and Gravediggers & Resurrectionists at one Ireland’s most historic and storied cemeteries. For events information and tickets sink your teeth into www.bramstokerfestival.com<http://www.bramstokerfestival.com>

Spirits are sure to be raised as Ireland’s king of camp and risqué comedian, Al Porter, takes to the Bram Stoker Festival stage with Camp Dracula (Sunday 29th, Number Twenty Two, 7.30pm & 9.30pm, Tickets €20), his new comedy show based on Bram Stoker’s legendary gothic son.
Master-storytellers and creators of unforgettable interactive experiences, Macnas, return to the streets of Dublin (Monday 30th, starting from Moore Street, 6pm, Free) with Memory Song, a hauntingly beautiful, wild and tempestuous parade. From Moore Street to the old fruit market near Smithfield, the capital’s streets are sure to be transfixed as the transcendental, the macabre, the profane and the magical is unleashed.

Thrill seekers are invited to Glasnevin Cemetery for Gravediggers & Resurrectionists (Saturday 28th/Sunday 29th, Glasnevin Cemetery, 1.30pm, Tickets €10) to get under the skin of the inspiration behind some of Bram Stoker’s more ghoulish stories. Take part in a spellbinding walking tour of Glasnevin Cemetery, taking in the famous graves and the stories of the living, the dead and the undead, followed by fireside stories in one of Ireland’s best-preserved traditional pubs, the Gravediggers, where you can enjoy optional extras of pints and traditional coddle.

Other ghoulish adventures taking place over the weekend include Dear Air (Friday 27th/Saturday 28th, Belvedere House, 8pm, Tickets €12), a live, theatrical, horrifying homage to the golden age of classic radio horror. In the grand Irish tradition of Bram Stoker, Sheridan le Fanu and Podge and Rodge, enjoy six ten-minute tales of terror, plucked from the minds of six of Dublin’s most fiendishly twisted writers, and shocked into life by six of our delightfully demented directors, in a night of ghoulish live entertainment.

BRAM Audio Ghost Experience (from Friday 27th, Citywide, €5 to download) is a haunted, haunting, audio horror experience inspired by the classically creepy works of the legendary author. Beginning in Dublin’s dark city centre streets and ending god knows where, this weird walking tour is not for the faint hearted; while We Are The Monsters (Friday 27th – Monday 30th, D-Light Studios, 9pm nightly with extra performance at 6pm on Sat 28th, Tickets €12) is an immersive experience about the monster within us all: as ally, other and dreaded creeping darkness. Created by Pygmankenstein Theatre Company and The Gremlin, in collaboration with Algorithm, We Are The Monsters features a despotic horror host, fake blood, an interview with Dr. Caroline Picart, a story about a child finding a finger in the back garden, and moths.

Speaking about the launch of this year’s festival, Lord Mayor Dublin Mícheál Mac Donncha said “Bram Stoker and his novel Dracula are part of Dublin city’s unique literary heritage. I would encourage everyone to delve into the wonderful cultural offerings the Bram Stoker Festival programme of events provides and enjoy doing something a little different this October Bank Holiday weekend.”

Also speaking at the launch, Keelin Fagan, Fáilte Ireland Head of Dublin, said  “Fáilte Ireland are delighted to once again support the Bram Stoker Festival, a uniquely Dublin event and a vital component of our tourism offering in the Autumn.  The festival provides opportunities to showcase our culture, people and places and so enhance the visitor experience of Dublin. The Bram Stoker Festival creates a world class, festival hub within the Capital and transforms the city streets, delivering a city wide celebration with fantastic events, street theatre and animation.  The Bram Stoker Festival helps us in our work to promote Dublin domestically and on the international stage as a city that is always on, fun and vibrant – ensuring that Dublin is a must-visit European city destination”.

Families and younger fans of the gruesome have the chance to come along to Stokerland (Saturday 28th/Sunday 29th, St. Patrick’s Park, from 11am – 4pm, Free), a pop-up Victorian fun park for families and the eternally young. With one of the city’s stunning cathedrals as a gothic backdrop, this ghoulish gathering will present comedy shows from Punch Lion Kids Comedy Club, street theatre from Victorian undertakers Morbid & Sons and a Kids v Adults themed Sing Along Social, alongside rides and attractions to ensure a fangtastic time for all. The Ark in Temple Bar also hosts some spooktacular events for kids over the weekend. Make Your Own Deadly Dance Track (Saturday 28th, 10.30am & 2pm, Tickets €11) or join the Supernatural Choir (Sunday 29th, 2pm, Tickets €11) with families and friends invited to come along, as Bram Stoker Festival creates the biggest, other-worldly sounding choir of deadly singers in just a few hours. Learn to sing a number of well-known fun popular songs and turn them into new spooky versions with haunting vocal sounds and gothic harmonies, before invading Meeting House Square for a supernatural sing along.
Speaking about the festival programme, Tom Lawlor Festival Co-Director, said “Bram Stoker Festival gives Dubliners and visitors the chance to experience the capital city in a whole new way, to enjoy a little of Dublin’s darker side. Whether you’re a fan of gothic literature, camp comedy or spooktacular spectacle, Bram Stoker Festival will fill your October Bank Holiday weekend with a host of darker events you won’t experience at any other time of year.”