Light Up Your Bike! 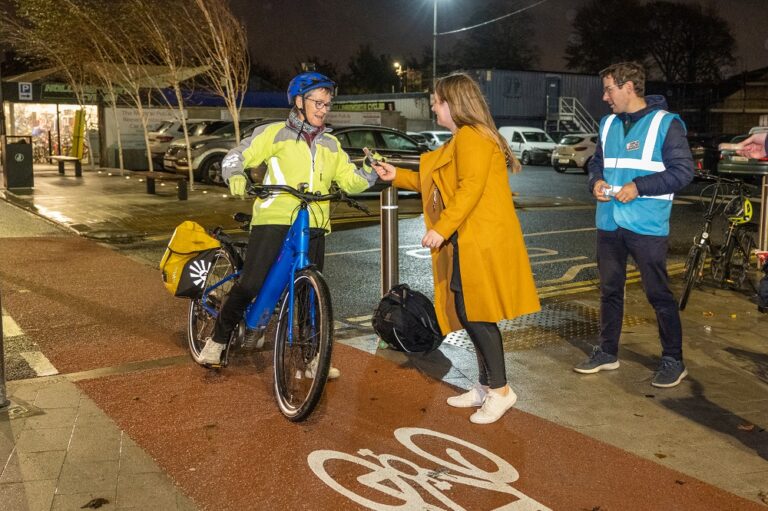 The four Dublin Local Authorities, An Garda Síochána, the Road Safety Authority, and the Dublin Cycling Campaign call on cyclists to ‘Light Up Your Bike’ during the darker commutes. Now that the clocks have gone back road users may be faced with darker commutes and those that cycle are reminded that the use of bike lights is a legal requirement when cycling during lighting up periods, which is from 30 minutes after sunset until 30 minutes before sunrise. If you choose to cycle without lights, or your lights fail when on the road, you become less visible, as well as running the risk of a €40 fixed penalty notice.

‘Light Up Your Bike’ is a Dublin Cycling Campaign initiative which promotes the legal requirement to have properly working bike lights and to use them during lighting up periods. The use of bike lights helps increase your visibility to other road users, with many types and styles on the market to choose from. Most bike lights tend to be battery or dynamo operated. If using battery operated bike lights, it is important to remember that they may run out of power whilst on the commute. That’s why it is important to have a back up pair which you can easily attach to your bike in the event you require them to get you to your destination. It is also important to remember that bikes lights are not just for adults they are to be used by children and teenagers when cycling to school.

Superintendent Thomas Murphy, Garda National Roads Policing Bureau, said: “An Garda Síochána is, as always, delighted to be part of this very important road safety initiative.  A bicycle is not just for leisure but also used as a daily transport option. Cycling offers freedom and independence, but with that comes a personal responsibility for all cyclists to ensure they and their bicycles are appropriately equipped, protected and visible on the roads, particularly during these dark evenings and mornings. The ‘Light Up Your Bike’ campaign is about bringing awareness to cycling safely on our roads. An Garda Síochána is committed to playing its part in educating and protecting all road users, through the issuing of road safety advice and the enforcement of Road Traffic legislation. It is an offence for a cyclist not to have a front lamp or rear lamp illuminated during lighting-up hours. An Garda Síochána are asking cyclists to make sure they are visible to all other road users by equipping their bicycles, and children’s bicycles, with the correct lighting, while using the roads

Sam Waide, CEO, the Road Safety Authority said: “I am pleased to be supporting this very important ‘Light UP Your Bike’ initiative to remind cyclists to make sure they have the correct lights on their bikes and to check them regularly. This is to help ensure that they are more visible to motorists and other road users. They must have a white or yellow light to the front of the bike and a red light at the back. As the evenings are getting darker we need to ensure that the lights are also working on our children’s bikes and remind them to check them regularly.”

Ellen Cullen, Chair of Dublin Cycling Campaign, said: “I am delighted that the four Dublin Local Authorities, An Garda Síochána, and RSA, have come together to support the Light Up Your Bike initiative. Using good quality lights on your bike is the best way to improve your visibility to other road users during darker mornings and evenings. Bike lights are a legal requirement during Lighting-Up hours, which is from 30 minutes after sunset until 30 minutes before sunrise.”