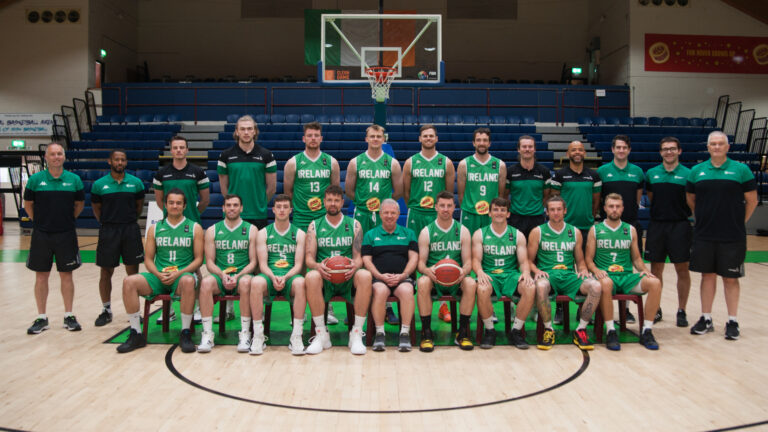 Ireland head coach Mark Keenan says his side will take it “one game at a time” in the FIBA European Championship for Small Countries, as they prepare to take on Andorra in their opening game today. Tip off at the National Basketball Arena is 7pm and you can watch the game live here.

Speaking today after his side’s final training session at the National Basketball Arena, Keenan gave his assessment of their first opponents, Andorra. “A very stiff test. They’ve got quality players that are playing in the top league in Spain. We’ve done our bit of scouting from the previous tournament in 2018, and they have a lot of young guys coming through as well from their underage programme.

Will Hanley is to make his Ireland debut, the 31-year-old from Connecticut played in Uruguay this past season and has experience in some of Europe’s top leagues including the Spanish ACB, arguably the second-best domestic league in the world.

“He’ll bring great experience. He’s a 31-year-old, has a number of high quality years as a pro behind him. Now he’s slotted into the group really well and kind of brings a calming influence to the group, and obviously he’s a quality player as well. So we’re dying to get him into action and let’s see what he can do in real games.”

CJ Fulton is also in line for his senior tournament debut for Ireland, having picked up his first two senior caps in the double header against Slovakia in July.

“CJ for such a young guy has a lot of maturity to his game, beyond his years, and I suppose at the other end of the spectrum to Will in his career, CJ just kind of getting started but look we’ve all seen what he can do underage, and we’re excited to see what he can do now at senior level.”

Ireland’s schedule in the round robin tournament also sees them take on San Marino on August 12th, followed by fixtures against Gibraltar on August 14th and concluding against Malta on August 15th.

Mark Keenan was captain of Ireland last time they won a senior men’s international tournament, when they claimed the Promotions Cup in 1994, which also took place at the National Basketball Arena. Keenan’s assistant Adrian Fulton was also part of that 1994 side.