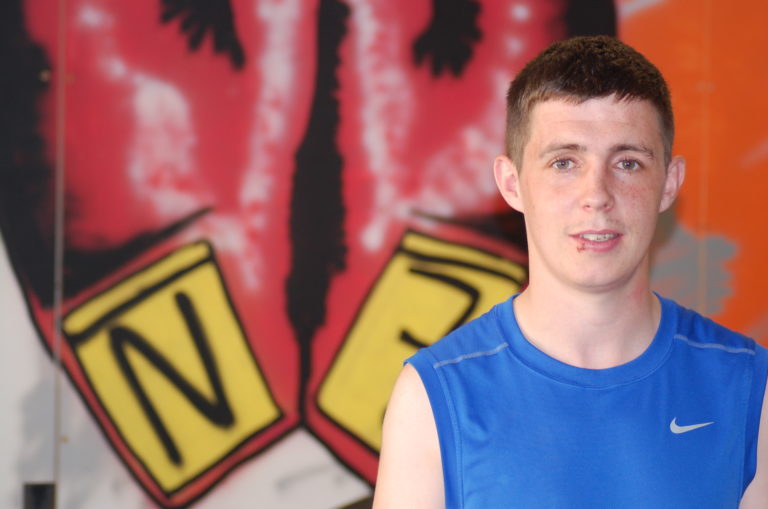 The Tallaght boxer faces Bray’s Regan Buckley in a six round super bantamweight contest on the ‘Celtic Clash 3: Building Champions’ card at the National Stadium on Saturday September 9th. The card is headlined by former amateur star and RTÉ pundit Eric Donovan, who faces Welsh champion Dai Davies for the BUI Celtic featherweight title, but much of the attention has been focused on the McDonald-Buckley match-up which many feel may steal the show. All Irish pro boxing match-ups are rare enough – but at McDonald and Buckley’s stage of their careers they are almost unheard of. ‘The Cobra’ only debuted last year and currently has just two pro fights, while his opponent only has one. A fight that has seen both commended for their refreshing bravery, there have also been some that view it as a silly and unnecessary risk. 28 year old McDonald though has a message for those of this view.

“I say they are the ones that are mad, I’m not getting any younger and at least I will be in a fight this time,” said McDonald in reference to his two relatively facile victories over negative journeyman opponents. “I know I can’t just turn up and win. I’ll have to work for the win and when I will it will feel all the better as a result. They [Team Buckley] asked me to fight and I didn’t have to think twice about it.” “It’s a no brainer, I can’t wait for it, training’s going great. we’re training here, preparing to do damage. I’ve noticed a lot of people are interested in this fight and I’m glad because these are the fights we need to be taking to be putting bums on seats.”

McDonald has recently signed with Boxing Ireland Promotions, the outfit behind the card on September 9th, and Stephen Sharpe described how “In a division where there is very little domestic competition and a scarcity of opponents across Europe at that weight, both lads have taken the brave decision of facing each other at this time in their careers. This is a win-win for both lads who regardless of the result can increase their profile while progressing to contend for domestic title in the near future.”

It has been a feisty build up to the bout and it will only get more heated as fight night approaches. Both were winners at the 2015 National Intermediate Championships, with Buckley taking the light flyweight crown while McDonald, who was the last fighter to box out of the famous Golden Cobra club, won top honours at bantamweight. Now a natural flyweight, 20 year old Buckley is jumping up three weight divisions for the fight, and McDonald is predicting pain for the youngster.

Whatever happens, it will be an entertaining fight. Buckley impressed massively on his debut in August, while McDonald brings an all action style to the table. He detailed how “I have a style that suits the pros. I am a come-forward attacking fighter I have always been that way and it has helped working with the Hyland brothers over the years. People have always said I had a pro style. I am one of those fighters that gets better and enjoys the fight longer it goes.” A family and community man, McDonald is supported by his fiancée Trisha and two young sons Jayden and Carl. He also always makes sure to pay credit to his coaches, from Golden Cobra, to the N7 Boxing Academy, and now in the pros. He explained how “I’ve been with the lads all my life, Jaws, Eddie, Pajo, the lads, they’ve looked after me since I was a baby. It’s an unbeatable bond, the lads keep you on the straight and narrow and that’s the main thing. I am the man I am today because of all the lads.”