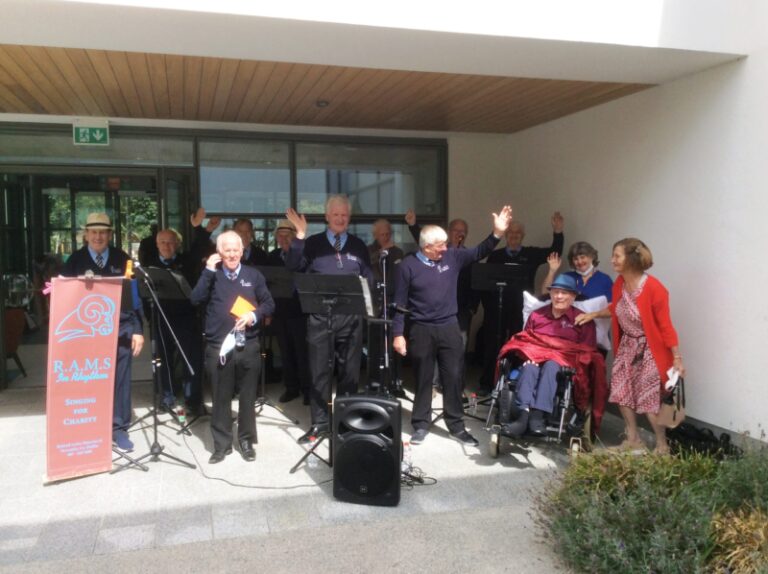 Recently, the RAMS in Rhythm celebrated the 90th birthday of one of their esteemed members, Mr Jack Sheerin who was 90th years of age on Tuesday 23rd August. Jack has been a very active member of the Retired Active Men’s Social RAMS since its foundation in 2010. In 2012 they celebrated Jack’s 80th birthday in the Community centre Newcastle, as they have done with all members who celebrate their 80th birthday achievement.

The members of the singing group The RAMS in Rhythm, entertained and sang in Peamount Hospital for the birthday of Jack, and all of the other patients. It was a wonderful birthday surprise for Jack, and to the delight of his family, who also came to visit and celebrate the day with him. Lots of his family attended, and to the delight of his wife Sheila, who was over the moon with the high spirits, and exuberance of all the guests.

The RAMS in Rhythm did not disappoint the guests, with the RAMS singing for one and a half hour, and to all of Jack’s favourite songs. “My Best Friend” was one of Jack’s favourite songs when he was an active member of the singing group, and he was well and truly keeping up with the singing. Our very own Chairman, Paddy Becton, gave a great display of his Irish dancing steps, to the tune of  “Say You Love Me.” A great round of applause and appreciation from all the guests, as Paddy continued his dance exhibition. The RAMS were in great voice, singing a wide variety of songs, and showed the real value of friendship, as we age. Ten members of the group attended, and sang their (Big) hearts out.

The RAMS presented Jack with a beautiful birthday cake, made by one of our member’s Daughters. Musical Director Mr Liam O Donnell, spoke of the great contribution Jack gave to the singing group in the past, wishing him a very Happy Birthday, and wishing Jack good health, and happiness in the future. “Oh yes, it was a little emotional, but we did well to hold back the tears.” Peamount Hospital offered the RAMS some wonderful hospitality, sandwiches, cake, and beverages.

Sheila spoke of Jack coming to Ireland in 1936, on a liner from the USA, and docking then in Moville, Co. Donegal. As it was then, the main port of liners from the States then. Jack was born on the 23rd August 1932 in Newark New Jersey, USA. His Farther was from Boyle, Co. Roscommon, and his Mother was from Leitrim. They met while in America. The family returned to Ireland when Jack was only four years of age, they arrived in Moville, Co Donegal. Jack grew up in Boyle and went to secondary school in Summerhill Co. Sligo

He began working in the Bank of Ireland, and eventually became manager working in different branches including Co. Clare and Baltinglass, Co Wicklow, and finally retiring to Tullow Co Carlow. Jack moved to Newcastle, Co Dublin in 1995. He was a very committed member of his church community, and a daily mass goer, a member of the church choir, and also assisting with the finances, and mass reading. Jack has always been a keen fisherman and had his own lake boat on Lough Arrow. He enjoyed his rounds of golf, and ballroom dancing. A man of many talents. He was an avid bridge player, and was President of the Irish Contract Bridge Association. Jack has five children, eight grandchildren and six  great-grandchildren. He has seven step children and 14 step grandchildren.

226 day turnaround for issuing taxi licences must be addressed

Programme to provide opportunities for youth in Ballyfermot & Cherry Orchard