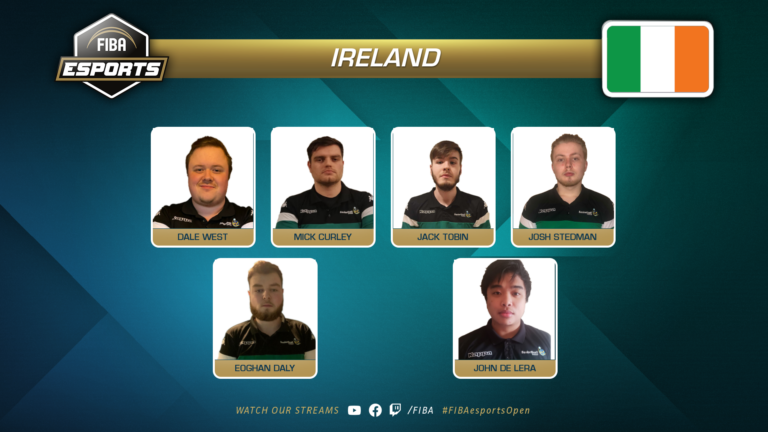 Basketball Ireland has named its 6-man Ireland team for this week’s FIBA Esports Open III. Once again Mick Curley, who plays basketball for Glasnevin and is a former Ireland U16 squad member, will captain Ireland’s Esports side.

The FIBA Esports Open III has almost doubled in size, with 60 teams now competing worldwide. Ireland are competing in the Europe Conference ‘Current Gen’ competition and will play Estonia, Poland and Latvia in the group stage on Friday. The knockout stage, which is now a best-of-3 playoff series, takes place on Saturday and Sunday.

Speaking about his call-up John De Lara said: “I am delighted to be chosen to represent Ireland at the FIBA Esports Open. I watched the team compete at the last tournament and they were desperately unlucky not to emerge from the group stage. I am hoping that I can help us progress to the knockout stage.”

Ireland captain Mick Curley added: “We’re excited to be able to represent Ireland again in the third FIBA Esports Open. We were unfortunate to miss out on a spot in the quarter-finals on points difference last time out, but it was a learning experience for all of us. We’ve been practicing a lot more this time around and we have added another talented player to the team, so hopefully we can make a good run in this tournament.”

“The team is preparing well at the moment against strong international competition. The guys are more familiar with each other, having played together before and we’re excited to see how John’s addition gives us more depth and variety too. Having won a game in the last tournament, the team are hoping to go further this year and make the knockout stages.”

This tournament will also see Ireland’s team feature Hula Hoops on the team jersey. The long time partners of Irish basketball are supporting the team for the first time.

Mick Curley – Ireland’s captain Mick Curley, who hails from Dublin, won the inaugural Basketball Ireland Esports Championship in May 2020. On the court he has won National Cups at underage and senior level. This will be his second time representing Ireland, having been a member of the Under-16 squad in 2016. Off the court, he is a full-time NBA 2K player with over 220,000 subscribers to his YouTube channel. He will be playing as a power forward, with three-way scoring abilities.

Eoghan Daly – Daly is a 22-year-old TUD student, from Sallins in County Kildare. He has changed positions from the last FIBA tournament and will now be a glass cleaning finisher at the Centre position.

Josh Stedman – Stedman is originally from Kildare, but is now based in Carlow. The 20-year-old works in retail and will be lining out as a perimeter lockdown point guard.

Jack Tobin – 20-year-old Jack Tobin hails from Meath. He is the team’s point guard and will be playing with a playmaking shot creator.