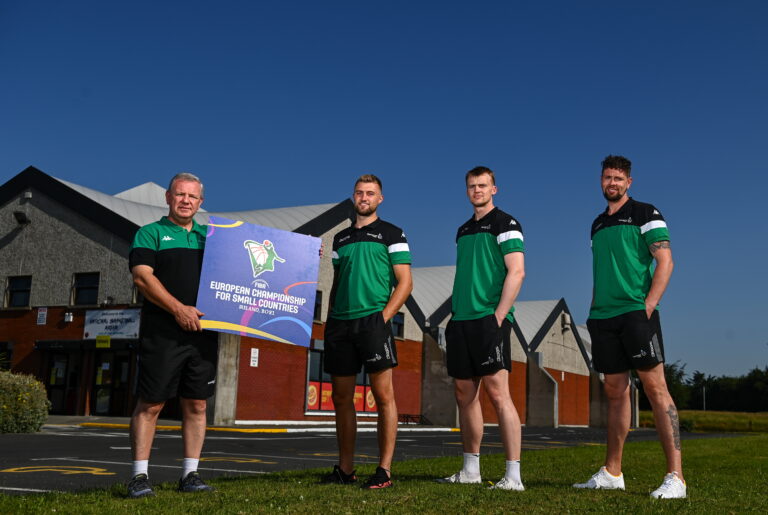 Ireland head coach Mark Keenan has finalised his 12-man squad for the FIBA European Championship for Small Countries, with Jason Killeen named as captain. He is one of three Griffith College Templeogue players selected, Lorcan Murphy and Neil Randolph are also included. The tournament will take place in less than three weeks’ time at the National Basketball Arena in Dublin, from August 10-15th.

CJ Fulton, who earned his first two senior Irish caps in the two-game series against Slovakia at the weekend, has made the cut. It completes a successful year for Fulton, who moved to Massachusetts to play for Winchendon Hoops in the USA last season, before announcing his switch to Lafayette College in spring, where he’ll be playing Division 1 college basketball.

Will Hanley is in line for his international debut at the tournament. The 31-year-old 6’7” Irish-American power forward, was born in Connecticut and has played for clubs in Spain, France, Japan and Uruguay.

Speaking about his selection for the FIBA European Championship for Small Countries, Ireland head coach Mark Keenan said: “As a coaching staff we are delighted with the squad selection we have made. It was a very difficult task as we anticipated at the start of the programme that many great players would not make the final tournament squad. From 2019 to now we have worked with a group of approximately 30 players in total. All have contributed greatly to the progress of the team and I consider all those players as still being a part of our extended squad and part of our group. I would like to thank all those players for their dedication, hard work and desire for wanting to be part of this Irish senior men’s team.”

Keenan also explained his choice of captain, after Killeen was awarded the honour, “We are pleased to announce Jason Killeen as our team captain and Kyle Hosford as vice-captain for the tournament. Jason has been a constant with the national team over the past 14 years, barring injury, and has been a prominent player in the Super League for many years. With his experience and personality he will be a great leader for this team.

“Kyle has also been a very prominent player in the Super League and couple that with his international experience and also his leadership on the court, he will be a great vice-captain to Jason. Having said all this, it was also a very difficult decision to make, as we have many great leaders within the group.”

The Ireland head coach added, “We are all looking forward to the tournament start now, which is only a few weeks away. Having completed our friendly games against Slovakia this past weekend, these games have given us a clear indication of where we need to improve as a team over the next few weeks. We can be happy with our performance levels over the weekend for our first games together as a team, but we will need to go up another few levels for the tournament.”

Hosts Ireland will face Andorra in their opening fixture of the FIBA European Championship for Small Countries on August 10th. The first game of the tournament will see Malta play San Marino. The event will take place at the National Basketball Arena in Dublin.

Ireland’s schedule in the round robin tournament sees them take on San Marino on August 12th, followed by fixtures against Gibraltar on August 14th and concluding against Malta on August 15th.

Mark Keenan was captain of Ireland last time they won a senior men’s international tournament, when they claimed the Promotions Cup in 1994, which also took place at the National Basketball Arena.