Gardaí Honored on 81st anniversary of their deaths 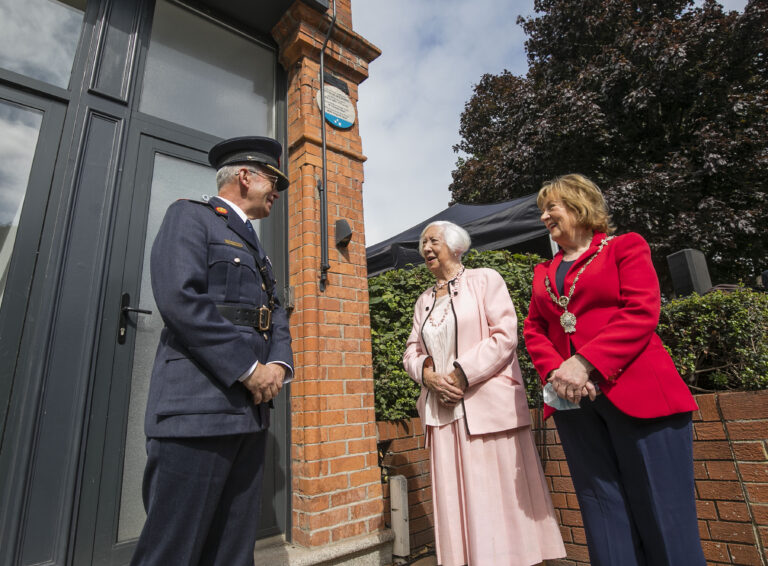 Dublin City Council is proud to unveil a plaque to honour two An Garda Síochána detectives who were killed in the line of duty, 81 years ago. The commemorative plaque is being unveiled at the building on Rathgar Road where the two men lost their lives. The plaque was proposed by the men’s surviving families and by Gardaí from Rathmines Station.

Detective Sergeant Patrick McKeown, from Armagh, and Mayo-born Detective Garda Richard Hyland, were both shot during a raid at 97A Rathgar Road, on 16th August 1940.

Shortly before 8 a.m. on 16th August, 1940 a group of five detectives, under the command of Detective Sergeant Patrick McKeown, carried out a search in Rathgar Road, Dublin, under the provisions of the Offences against the State Act, 1939.  After gaining entry to the building, the Gardaí were surprised by a burst of gunfire from behind a partition wall.

Detective Garda Hyland managed to discharge one shot after being wounded which warned off his surviving colleagues from entering through the front of the shop. Detective Sergeant McKeown died from his wounds the following day. Another Garda, Detective Garda Brady, was seriously wounded.

At the event Garda Commissioner Drew Harris spoke of the two men who were killed, and the sacrifice they made when carrying out their duties.

Commissioner Harris said, “On this day 81 years ago, Detective Garda Richard Hyland and Detective Sergeant Patrick McKeown made the ultimate sacrifice to protect the State and its people.

We know through history that on August 16th, 1940 Detective Garda Hyland and Detective Sergeant McKeown demonstrated immense bravery and performed their duties intelligently, fully knowing that there was a risk to their lives.

The commemorative plaque being unveiled is a fitting memorial to their sacrifice. And, An Garda Síochána will also recognise their exceptional courage and bravery by awarding the Gold Scott Medal to both men posthumously at a ceremony in Dublin Castle.

This anniversary is another reminder of each of the members of An Garda Síochána that have their lost their lives in the line of duty, and the bravery demonstrated by Gardaí on a daily basis to keep people safe.”

Also speaking at the unveiling, Councillor Mary Freehill, paid tribute to all the Gardaí who have lost their lives on duty, noting that the plaque will serve as ‘a reminder to us all, if any were needed, of the risks that the women and men of An Garda Síochána take on our behalf as they perform their duties on the streets of Dublin’.

The plaque is being unveiled to mark the 81st anniversary of the incident by Councillor Freehill, representing the Lord Mayor; Mary P. Hyland, a daughter of Detective Garda Hyland, and Garda Commissioner Drew Harris.

The decision to erect the plaque was made by the Dublin City Council Commemorations & Naming Committee.