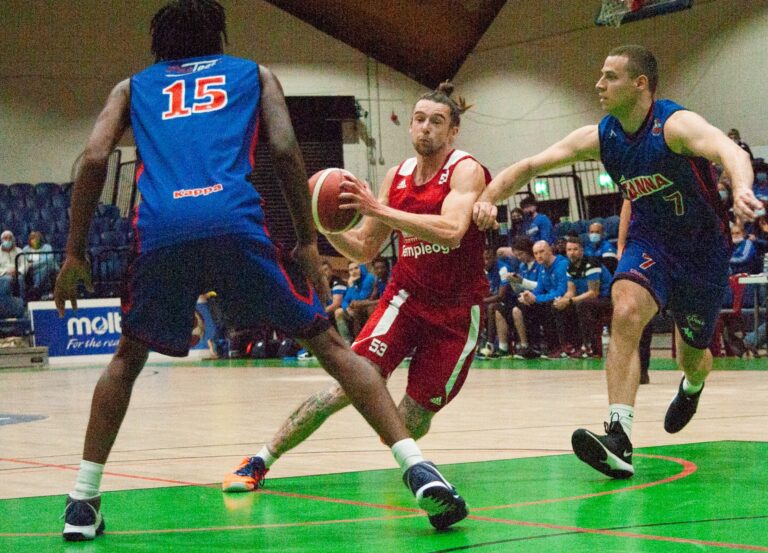 UCD Marian, Griffith College Templeogue, Tradehouse Central Ballincollig and Garvey’s Tralee Warriors are the early pace-setters in the InsureMyVan.ie Super League, after each side made it two wins from two.

“It was a little bit tough coming into this game, with DJ moving on from us, leaving the country today. The guys put in an extra 20 per cent each to make up for that.”, head coach Mark Keenan said.

“When they (DBS Éanna) took the lead we were on rocky ground, but fair play to the guys, they really dug deep. It was great to get a couple of stops when we had to and Puff (Summers) with the big free throws to make it a really tough last possession for them.”

UCD Marian beat Bright DCU Saints 78-68 in the other Dublin derby at the weekend. They appeared to be coasting to victory, with a sizeable 52-25 half-time lead, but Gareth Winders’ side closed the gap after the break – Julius Brooks had a sizeable 26 point contribution in a losing effort. Srdjan Stojanovic led the scoring for UCD Marian, with 24 points, followed by Dan James (18) and Neil Baynes (13).

UCD Marian head coach Josko Srzic said: “I am happy with the result after the first two games, especially considering we have missed Scott (Kinevane) and Mariusz (Markievicz) in first game and were missing both point guards Scott (Kinevane) and (Jonathan) Jean for Bright DCU Saints and were still able to come out as winners.

“We started well and had a big lead early in the game, which gave me opportunity to give a chance to our young players who are playing in the Super League for the first time and had worked hard during the pre-season. After such a big lead in first half it is always hard to motivate players to continue with the same effort. DCU came out more motivated than us in the second-half, but we were able to keep a comfortable lead until the end. There were no concerns, other than preventing injuries that usually happen in games like this one.”

InsureMyVan.ie Super League newbies Tradehouse Central Ballincollig are adjusting nicely to life in the top flight, they picked up their first away win at the first attempt, beating Team 360 Financial Killorglin 69-64. Andre Nation picked up another big score, with 20 points.

Head coach Kieran O’Sullivan said: “Yes we are thrilled to get the away win, it’s never an easy venue, the guys were impressive on defence and in a game of swings, we managed to get ahead crucially in the fourth quarter. It won’t be long before Kilorglin will start winning, as they have talented players.”

Garvey’s Tralee Warriors head coach John Dowling was relieved afterwards: “A hard game for us on the road against a Moycullen team well coached and well run, but we had some huge performances from our young players, Steven Bowler and James Fernane, who helped us get over the line.”

John Cunningham was frustrated in the aftermath. “Disappointing result. After a big effort last week, we just didn’t get the same intensity in the first-half and they scored way too easily. Then, when we got back in the game, we had turnovers and bad decisions at key moments. Credit to Tralee, they made big shots consistently and fully deserved the win in the end. We just have to knuckle down for a tough trip to Killorglin next weekend.”

There was a thriller at the IWA Clontarf, where defending champions Belfast Star picked up their first win of the season, it took a three pointer from Max Cooper with 6.1 seconds remaining to clinch it. Cooper led Belfast’s scoring with 28 points, followed closely behind by Conor Quinn on 23 points.

Belfast Star had a 10 point cushion by half-time, but Killester responded impressively and were level at 49 points apiece with three minutes to go in the third quarter. The game appeared to be veering in Killester’s favour, before Belfast Star wrestled back the result.

Adrian Fulton said: “We had a good start, we were in good shape and we lost our way, we really struggled in the third quarter. John Behan was absolutely tremendous, Kason Harrell was fantastic as well, so they gave us lots of problems and we simply couldn’t score. It wasn’t any kind of complex offensive stuff, it was just a lot of guts and determination, when they had us over a barrel they dug in and fair credit to the players. Max (Cooper) came up with the big shot at the end with six seconds to go, but still I wouldn’t have been surprised if Killester had knocked one down on the buzzer to win it.

“It is a long season, but myself and Brian (O’Malley) have a lot of work to do, because it was really exciting. The quality of the game ebbed and flowed, there was some brilliant stuff and there was some bananas stuff, but it was exciting for sure. I don’t think I can take six months of this, if they’re going to be that close every week!”

Killester head coach Brian O’Malley added: “The guys were far more physical in the second half, we got a bit of momentum and on a roll, made some shots, John Behan was fantastic and Kason (Harrell) is always immense. I suppose towards the end we didn’t execute as well as we needed to. When it comes down to the last few minutes I suppose we’ll reflect on how it went, but execution-wise it wasn’t good enough. Credit to (Belfast) Star, we went on a run and got up and maybe took our foot off the gas and then they punished us with a quick barrage and we just couldn’t recover.”

C&S Neptune picked up their first win of the season, a 92-78 success over NUIG Maree. The teams were level at 43-43 at half-time and C&S Neptune led by a point 67-66 going into the final quarter, before pulling away to win by 14 points. Nil Sabata top scored for the Cork side, with 25 points.

Player/coach Colin O’Reilly was pleased with how his side fared. “Really nice performance and win for us in the end. (NUIG) Maree are well coached and executed their play throughout. We seemed a little anxious early, forcing the issue and missed nine of our first ten shots, but once we settled down we got into our flow better.

“The game was in the balance heading into the fourth and our defence really stepped up to hold them scoreless for long patches. Overall we had fantastic contributions across the board individually. Our guards set the tone defensively and our bigs dominated the glass when needed. Still a lot to work on, but a lot easier to do that after a win”, O’Reilly said.

In the MissQuote.ie Super League defending champions DCU Mercy made it two wins from two, thanks to a 42-38 victory at Trinity Meteors on Saturday.

They trailed at half-time, 19-15, in a low scoring contest, before eventually emerging with another win. Bailey Greenberg (13) and Alarie Mayze (10) were DCU Mercy’s top two scorers for the second week running, with Greenberg outscoring her fellow-American on this occasion.

DCU Mercy head coach Mark Ingle was relieved to come out on top: “It was a war of attrition today, with both defences on top. We were happy to win, but some of our shooting wasn’t up to our usual standard that we set for ourselves, but we will work hard to make those improvements.”

The Address UCC Glanmire continue to lead the way at the top of the division on points-difference, after 86-77 win at Singleton Supervalu Brunell. The trailed 49-43 at half-time and by three (69-66) going into the final quarter, but finished strongly to claim victory. Claire Melia picked up 29 points, while Claire O’Sullivan had 21.

Head coach Mark Scannell said: “I’m very pleased to get the win. It was a tough game, Brunell were very good, as we knew they are, but down the stretch we played great defence and only gave up eight points in the 4th quarter. Both Claire Melia and Claire O’Sullivan were excellent, but it was a dogged team performance with Casey (Grace) setting the tone early.”

Killester picked up their first win of the season, a 91-63 success over IT Carlow Basketball. Their summer signing Myah Taylor stood out with some excellent finishing from the three-point line, racking up 34 points. Mimi Clarke also caught the eye with 21 points.

“Our performance was much improved from last week, we weren’t good enough last week offensively or defensively. We set the tone early, we had a good first quarter, shot the ball well and that is going to help. I thought Mimi Clarke was excellent, 16 points in the first half and she was setting the tone.” Killester head coach Karl Kilbride said.

Alyssa Velles was the standout performer for IT Carlow Basketball grabbing 18 points. Speaking afterwards head coach Martin Conroy revealed his team were looking to recruit. “They’re (Killester) a really good team, we’re struggling at the minute, we have one American compared to everyone else in this league having two, we hope to rectify that this week, so it will get better for us. I am very proud of the way the girls played right up to the end of the game.”

WIT Wateford Wildcats overcame Leixlip Amenities Liffey Celtics 73-61 to get off the mark. New head coach Tommy O’Mahony was happy, ahead of a MissQuote.ie Super League double-header next weekend. “Obviously delighted with the win against a very good team of the calibre of Liffey Celtics. I thought our girls defence was excellent, which allowed us to flow more on offence. We have a big weekend ahead now with two tough games, so it’s nice to be going into them on the back of a good performance.”

Team Garvey’s St. Mary’s got off the mark with a 73-58 win over Fr. Mathews. Their American Le’Jzae Davidson top scored with 30 points, while Lorraine Scanlon chipped in with 17 and Deirdre Geaney had 14.

Head coach Liam Culloty said: “We are delighted to get our first win at Super League level. Obviously we had to respond after last week’s defeat (to The Address UCC Glanmire) and I think playing on our home court really helped us do that. The girls played fantastic defensively and can really be proud of their performance.”

Portlaoise Panthers got their first win, an 84-59 success over Limerick Celtics.

In the InsureMyVan.ie Division 1 new National League side Grand Hotel Malahide made it two wins from two, with a 86-74 win over Ulster University.