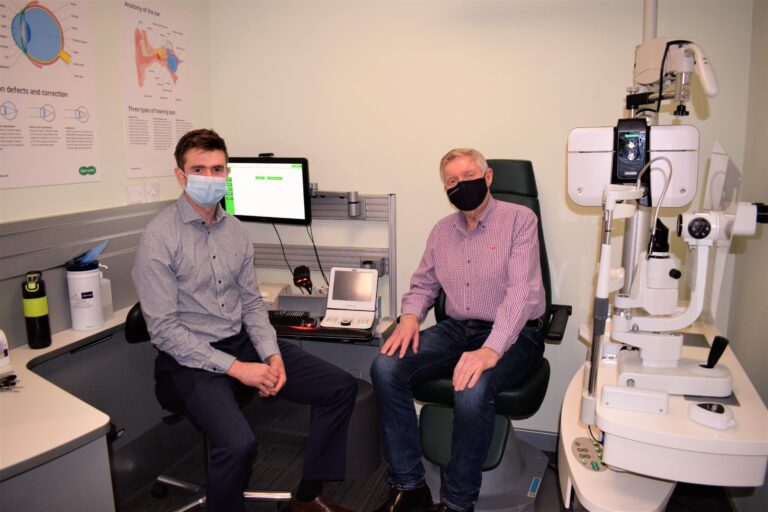 Clondalkin man John O’Halloran explains that Specsavers Liffey Valley optometrist, Patrick Dennehy, instantly recognised signs that he had suffered a stroke and advised him to attend A&E immediately. A routine appointment led to an incredible and shocking diagnosis for Clondalkin’s John O’Halloran after his optometrist, Patrick Dennehy, conducted a visual examination and revealed that the 75-year-olhad suffered a stroke. John immediately contacted his wife who collected him from the store and drove straight to Tallaght Hospital after Patrick advised him to attend the emergency department as a matter of urgency.

John said: “I don’t know what would have happened if I didn’t go up straight away to A&E. Patrick gave me a letter to give to the doctors and what he wrote in the letter after seeing me was the exact diagnosis that the doctors in Tallaght [Hospital] made themselves. I was really impressed with the speed at which he made the diagnosis. I am so appreciative of the service.”

The astonishing diagnosis was made at a routine appointment, making it all the more incredible for the Clondalkin native who never imagined he had a serious medical issue when he visited his local Specsavers in Liffey Valley, just minutes from his house.

John explained: “I had woken up one morning and the sight in my eye was a bit blurred, I had an appointment for my bi-annual check-up just after that, so I went along to Specsavers in Liffey Valley. [Patrick] told me straight away that the issue was not my eyesight, then he told me I had suffered a stroke. Despite my age, I have a very healthy lifestyle, so it was the last thing I expected to hear, but it shows you how important eye-tests are, not just for your eyes but for other things as well!”

Patrick, who also works at the Specsavers Maynooth store, conducted a short examination which confirmed his fears that John had a medical emergency and needed urgent treatment.

Patrick said: “I knew there was something wrong, so I did a general check with my hands. There was an issue with both eyes. Straight away you know you aren’t doing an eye-test because something is going on that is more important right now and requires urgent care. I spoke with an ophthalmologist at the Royal Victoria Eye and Ear Hospital and told him my concerns, he confirmed that John had likely suffered a stroke and should go straight to A&E. It certainly isn’t something you expect to be telling someone at an eye-appointment but [John’s] reaction was quite calm; he was shocked more than anything.”

John, who will celebrate his 76th birthday in a few weeks, travelled straight from Specsavers Liffey Valley to Tallaght Hospital and was admitted immediately. He spent a number of days in hospital while he was treated for a mild stroke. He is continuing his recovery at home and has made huge strides since being released from hospital in February.

John said: “I am more or less back to normal. My vision is still a little impaired but everything else is fine. It was only a mild stroke, so I was very lucky in that sense. I would be highly complementary of Patrick, and I have told everyone what he did! I was very surprised he could tell so quickly what was wrong, but I am very thankful for it.”

Conor Dewey, Retail Director at Specsavers Liffey Valley & Maynooth, said: “We are so pleased that we could help John and that he has made such a good recovery. We would urge people to attend all necessary and routine eye-tests and hearing tests and assure them that COVID protocols are in place to ensure the continued safety of staff and customers.”