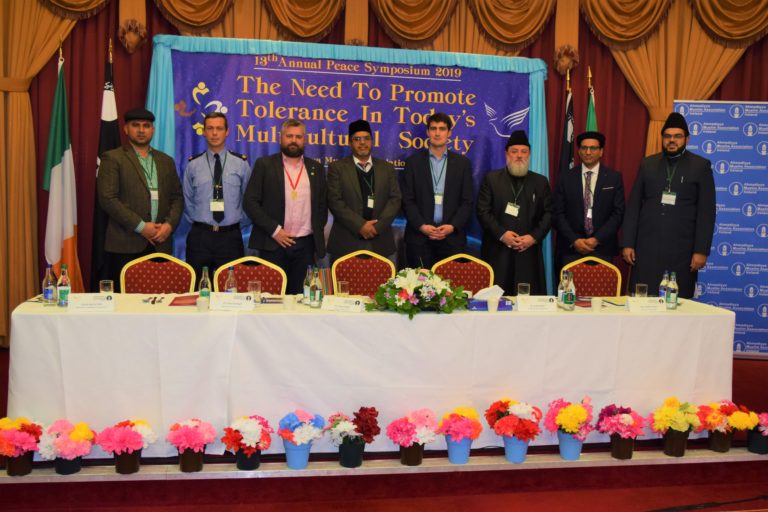 On Sunday 3rd November, the local members of the Ahmadiyya Muslim Association in Lucan were able to hold their 13th Annual Peace Symposium at the Lucan Spa Hotel. The theme of this year focused on ‘The need to promote tolerance in a multicultural society’. The peace Symposium has become a permanent feature of the Community’s activities for over a decade now in the proliferation of the true Islamic teachings that emanate a sense of love, tolerance, dialogue and harmony.

The event draws people ranging from all walks and sectors of life including diplomats, councillors, religious leaders, journalists, teachers and many others. This year 118 people were in attendance at the event. Most notable were H.E. The Indian Ambassador, The Deputy Ambassador of Ethiopia, The Honorary Consul of Belarus and the speakers for the evening that included Cllr Peter Kavanagh (Representing the Mayor of SDCC), Jack Chambers TD, Garda Barry Mills (Representing the Commissioner) and Imam Ibrahim Noonan (Imam of the Mary Mosque, Galway).

There was also an exhibition set up in the adjoining room to the main hall where the charitable work of the community was showcased. Alongside this many translations of the Holy Quran were also on display that the community has rendered. A separate section was also set up which commemorated the ongoing concerted efforts for the establishment of peace and justice that have been undertaken by the worldwide spiritual head of the association, Hadhrat Mirza Masroor Ahmad, the Khalifa of Islam. The event began with recitation from the Holy Quran that was followed by both Irish and English translations. The National President Dr. Anwar Malik presented the opening remarks which was followed by a power point presentation highlighting the worldwide concerted efforts of the community in the field of promoting its core values of ‘Love for All, Hatred for None’ to the corners of the world.

Thereafter the guest speakers took to the stage. The first speaker was the chief guest, Cllr. Peter Kavanagh (Representing the Mayor of SDCC) who first of all commended the community regarding the organisation of such inclusive events. He also spoke about how there are many elements that are hindering the establishment of tolerance and how the Ahmadiyya Community is
at the forefront in the promotion of tolerance and peace. During the speech Cllr. Peter Kavanagh also expressed his admiration of the presentation of the Irish Translation of the recited Quranic Verses.

The next speaker of the evening was Mr. Jack Chamber TD for Dublin West who spoke about how his hometown of County Mayo was once the most populated area in Ireland and then due to the famine many had migrated from there. Then whilst quoting a report Deputy Chambers further mentioned about how 80% of the Irish see immigration as a vital organ to society. He also thanked the community for inviting him to the symposium.

This was followed by the next speaker Garda Barry Mills (representing the commissioner), who talked about how when he was in school there was hardly anyone from another ethnicity and it is only recently that multiculturism has begun to take momentum within society. He also mentioned that recently Garda and the Government have begun to make legislations regarding hate crime and advised all the participants to report such cases in order to establish tolerance. The Keynote address was delivered by the Waterford born Imam, Ibrahim Noonan who spoke about how right wing elements and groups are a threat to a multicultural society. He also quoted various Quranic Verses and traditions of the Holy Founder of Islam that categorically provide support for the crucial role that the Islamic teachings play within the establishment of a tolerant society. Throughout his speech he emphasised a great deal about how as an Imam and an Irish Man he was duty bound to convey the true Islamic teachings to his fellow people.

The formal function ended in tradition with a silent prayer. This was followed by dinner. All the guests speakers were gifted with a book entitled ‘Introduction to the study of the Holy Qur’an’. A table of free literature was also set up for the guests.