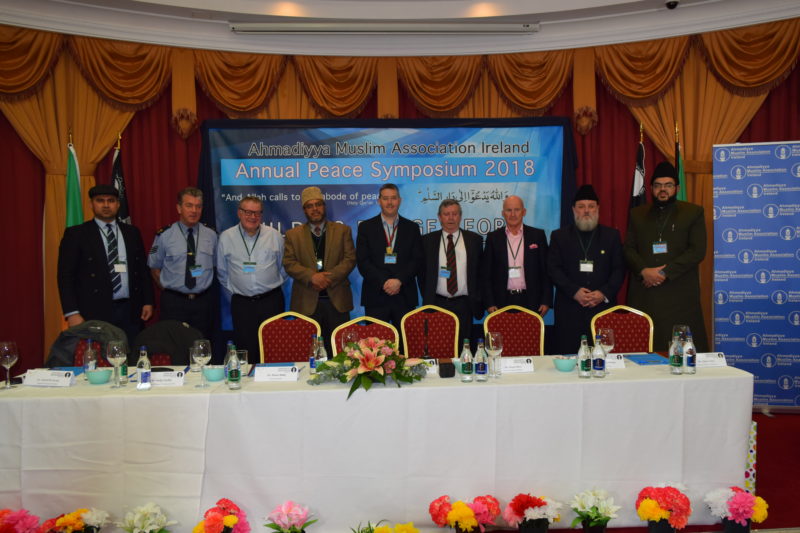 On Sunday 8th April, the local members of the Ahmadiyya Muslim Association in Lucan were enabled to hold their 12th Annual Peace Symposium at the Lucan Spa Hotel. The theme of this year focused on ‘Building Bridges for Peace and Integration’. The peace Symposium has become a permanent feature of the Community’s activities for over a decade now, in the proliferation of the true Islamic teachings that emanate a sense of love, tolerance, dialogue and harmony.

The event draws people ranging from all walks and sectors of life including diplomats, councillors, religious leaders, journalists, teachers and many others. This year 145 people were in attendance at the event. Most notable were the guest speakers that graced the event such as Mr. Paul Gogarty The Mayor of South Dublin County Council, Garda David McInerney, Mr. Yanky Fachler (The Jewish Historical Society of Ireland) and Imam Ibrahim Noonan (Imam of the Mary Mosque, Galway).

There was also an exhibition set up in the adjoining room to the main hall where the charitable work of the community was showcased. Alongside this many translations of the Holy Quran were also on display that the community had rendered. A separate section was also set up which commemorated the ongoing concerted efforts for the establishment of peace and justice that have been undertaken by the worldwide spiritual head of the association, Hadhrat Mirza Masroor Ahmad, the Khalifa of Islam.

The event began with recitation from the Holy Quran that was followed by both Irish and English translations. The National President Dr. Anwar Malik presented the opening remarks which was followed by a power point presentation highlighting the worldwide concerted efforts of the community in the field of promoting its core values of ‘Love for All, Hatred for None’ to the corners of the world. Thereafter the guest speakers took to the stage. The first speaker was the chief guest, the Mayor of SDCC who first of all appreciated the presentation of the translation of the Quranic verses in Gaeilge. He further acknowledged the ongoing concerted efforts of the community in the advancement of peace. He also condemned the persecution of Ahmadis that has been undertaken by some countries. He also spoke about how building bridges could be achieved through integration within society.

The next speaker of the evening was Garda David McInerney who spoke about the importance of understanding the Islamic teachings. He also spoke about how the community does not believe in imposing their philosophy upon others, rather they respect the beliefs of others. He further spoke about how An Garda Siochanna have never had any trouble in interacting with Muslims and with the community in particular.

This was followed by the next speaker for the evening Mr. Yanky Fachler who spoke about how religious hatred can never be tolerated in the pursuit for a peaceful environment. He further spoke about how dialogue between both Jews and Muslims should remain open and said that the Ahmadityya Community is one such community that has always endorsed such religious dialogue. He also praised the global efforts of the worldwide spiritual head of the Community, the Khalifa of Islam Hadhrat Mirza Masroor Ahmad.

The Keynote address was delivered by the Waterford born Imam, Ibrahim Noonan who eradicated the false notion that Islam was a religion that harboured extremist ideologies. He mentioned about how there is a growing concern regarding mass migration of Muslims from the Middle Eastern countries. He stated that those who harbour such concerns have forgotten that Ireland welcomed migrants. He further presented verses from the Holy Quran about how it endorses and advocates love, affection and mutual respect. He also mentioned that the United Nations had failed in its duty for maintaining world peace. He further mentioned that dialogue between communities would avoid conflicts and would bring harmony to all faiths and religions. Imam Ibrahim also quoted from the Worldwide Spiritual Head of the community, the Khalifa of Islam about how Islam inculcates the teaching of being loyal to your country as being part of your faith.

The formal function ended in tradition with a silent prayer. This was followed by dinner.