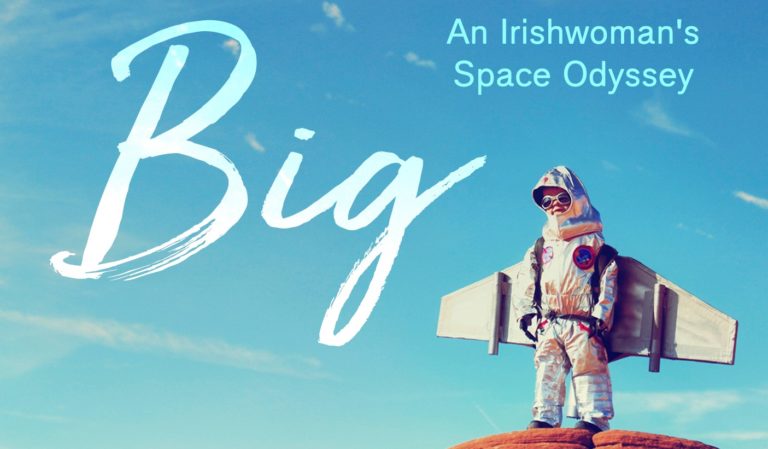 Dr Niamh Shaw is a performer, science communicator and STEAM ambassador with two degrees in engineering not to mention a PhD in science! Her mission to become Ireland’s first space explorer continues and she has achieved another landmark milestone on her epic journey. In her new book Dream Big: An Irish Woman’s Space Odyssey, Niamh describes her life through science and personal anecdotes. Since she was a child, Niamh wanted to go to outer space, but with no role model to look up to, she felt that was an impossible dream.  Instead, she pursued a career in academia. What do you do with an impossible dream, do you let them go?

Throughout her life, Niamh always felt that something was missing. Thinking that it was her creative nature that was unfulfilled, she stepped aside from a full-time academic career to concentrate on acting. Despite securing high-profile roles, something was still missing. While making her first theatre show, looking at her life choices and childhood ambitions, the realisation that she still wanted to fulfil her childhood dream to go to space, but had done nothing to achieve this goal proved to be a turning point for Niamh.  Now was the time to pursue her dream or she would spend the rest of her life regretting that she had given up on herself. And so, this 40-year-old woman from Ireland began a journey she is determined to finish. Since embracing her dream, Niamh has made major headway:

·         June-July 2015 – She completed a nine-week intensive programme at the International Space University’s annual Space Studies Programme in Ohio in partnership with NASA. She met and worked with over 120 people from all over the world who shared her passion for space.

·          Jan 2017 – She spent over two weeks on a Simulated Mars mission at the Mars Desert Research Station in the high Utah desert.

·         Aug 2017– She was invited to Star City in Moscow and visited the Cosmonaut Training Facility where she went on a Zero Gravity flight. Niamh is one of the few people in the world who has experienced the feeling of weightlessness.

·         March 2018 – Speaking at Áras an Uachtarain on International Women’s Day 2018 in response to President Higgins address to ‘Women in the Sciences’ audience attending a special reception in their honour – https://soundcloud.com/presidentirl/niamh-shaw-responds-to-international-womens-day-speech-by-president-higgins

·         Aug/Sep 2018 – Niamh received invitations to speak at New Scientist Live, WIRED Next Generation in the UK, and NASA Johnson at their Cross-Industry Innovation Summit.

·         April 2019 – Niamh is appointed the 2019/2020 Honorary Ambassador to the Irish Girl Guides.   This month the Irish Girl Guides launch a fundraiser initiative, Mishon-Moon for the refurbishment of their main building, where the whole membership of 13,000 girls will complete a collective sponsored walk to the moon (384,000km) logging their steps on Mishon, a specially designed app.

Currently, Niamh is pursuing more simulated missions, including a 28-day lunar mission where the selected crew members will experience what a working day and what life would be like if they were living on the moon!

Niamh will shortly be announcing the details of her mission – Walking Slowly to Space. Niamh believes that this will be the mission to earn her the right to get to space. When space agencies revisit the idea of bringing a citizen to space, Niamh will be the clear candidate. She will be the communicator in space chosen based on the many years of her work achieved on the ground.

Niamh has an incredible story and amazing experiences to share. Her story reminds us that we can be anything we want to be if we are brave and bold enough. Niamh reminds us that we must fight to be the person we are truly destined to be.