If  Studio 54 changed clubbing in america , something bigger was happening in little old Tallaght in 1991 that will never happen again . The beginning of an era  that became a huge part of teenagers lives & still remembered by everybody even today. When Cocos opened its doors in 1991 it became responsible for many relationships and love affairs, some that are still going strong today having met over cold chicken & chips, a diet of dance music, pop and lads wearing white socks.

It was a social scene that became a way of life , it became the biggest and most important event in young peoples lives , it was more important than any moon landing or new pope,  this was the clubbing capital of the world, Tallaght was the centre of the universe, it was the FA Cup final of going out and it was on our doorstep, you just couldn’t miss it, it was 6 nights a week & the slow set was the highlight yet terrifying and scary , you wanted it , looked forward to it but you were never sure how to react & the sense of the unknown was gripping. The Djs became household names in Tallaght and acted like superstars but they played your favourite record & they were the youtube and spotify of the early 90s . Going to Cocos was that event that helped you survive the week, you couldn’t wait, and sometimes couldn’t get in but it was always worth spending time in front of the mirror getting ready to go to the hottest nightclub in the city & it was always cool if you knew the doorman.

Just a short taxi ride down the road, things were hotting up in the Spawell complex , a new nightclub opened called Cloud 9, this became a friendly rival but shared the same memories  & customers from surrounding areas. It also became a hot bed of young people looking for fun at weekends but that wasn’t enough, it also produced a legendary and still talked about Monday night attracting people from all over Dublin with live music followed by a very late night club . Mondays in Spawell were the Golden Globes of going out , if you survived the weekend and turned up in Spawell on Mondays then you were a real clubber , you were a dedicated and a proper party animal especially if you made it into work on Tuesday . A combination of great music , bands and good customers made it a success. Cocos and Spawell succeeded in an era without social media, fancy graphic designers or over hyped radio adds .

Cocos and Spawell Reunion Tallaght will take place on the 5th of May at Show Nightclub, Tallaght. Re-live both clubs and an era that still holds great memories for so many people in Tallaght , the music, the fun and the people that were part of 2 great venues! 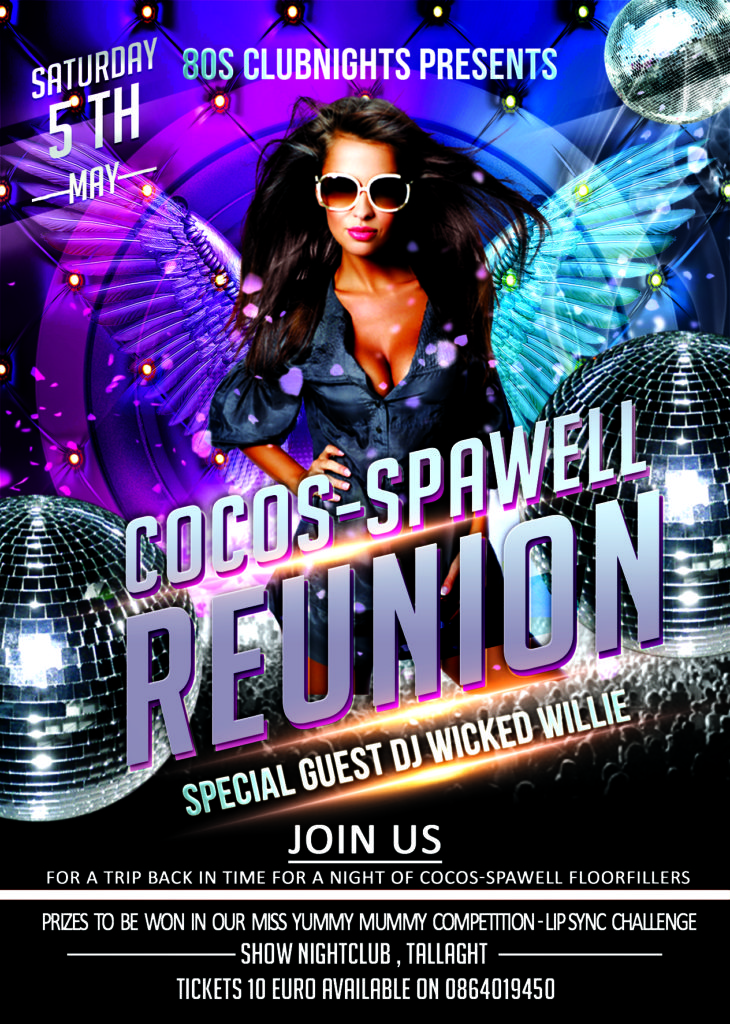 Baking With Newsgroup; No Sugar Flapjacks

Vacant Accommodation needs to be allocated to Frontline Healthcare staff