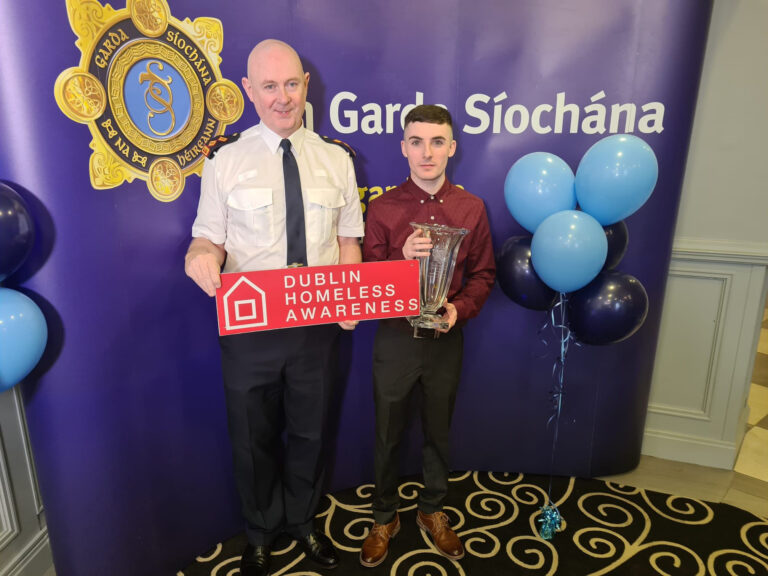 A young north-east Dublin man who promotes alternatives to crime and drug-related activity, has won a national Garda Youth Award for his work with the homeless.

Brandon O’Connor (20), from Donaghmede, was recognised for establishing the Dublin Homeless Awareness initiative, which manages teams of young volunteers.

He is an ambassador for ‘Get The Message Out – There Is Another Way’, a campaign organised through Northside Partnership, which nominated him for the award.

Northside Partnership is a development company working with locals, state bodies, public representatives, employers and trade unions to improve the lives of people in north-east Dublin and foster positive change.

The ‘Get The Message Out’ campaign aims to inform young people and their families of the dangers and the alternatives to drugs and crime and to support those wishing to exit that lifestyle.

Dr Jack Nolan, chair of the Darndale Economic and Social Plan implementation group, said Brandon is a very valuable ambassador for the campaign.

“We know we need to use every available means to positively help young people involved in the drug economy,” he said.

“Young people and their families need to know that there is another way. We could have no finer ambassador than Brandon.

“This initiative provides support for young people and families caught up in drug-debt intimidation.

“And it encourages people to consider a different way of life by highlighting opportunities, services and activities available to help them to reach their full potential.”

Pre-trainee paramedic Brandon established the Dublin Homeless Awareness initiative during his Transition Year because his mother experienced homelessness and addiction.

It celebrated outstanding young people, aged between 13 and 21, who have actively and positively contributed to their communities.

“Not every homeless person is an alcoholic or a drug addict,” said Brandon, “but each day is a fight for a bed.”